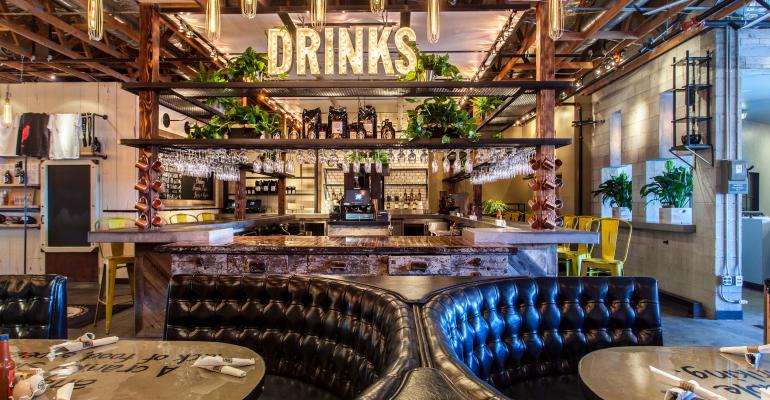 When Mimosas or Bloody Marys ride shotgun on a brunch order to-go, the path is clear for higher profits.

That is good news for operators in more than 30 states that have lifted restrictions on selling alcoholic beverages to-go — at least temporarily — due to the pandemic.

In some places, the law permits them to send ready-to-drink, pre-mixed cocktails out the door to customers for home consumption. In others, they can peddle build-your-own cocktail kits with separately packaged spirits and mixers for consumers to concoct at home. Typically, food must be ordered along with the booze.

New York is one of the states allowing alcohol sales to-go as a lifeline for operators whose dine-in business was decimated by the pandemic. At The Smith, a New York City-based group of seven casual American brasseries with locations in Manhattan, Washington, D.C. and Chicago, takeout volume has increased six times over pre-COVID-19 levels, with alcoholic beverages playing an important part.

“It hasn’t saved the restaurants, but it definitely has been a great help in trying to minimize the effect of not having people inside the dining rooms,” said Adam Burke, vice president of operations at The Smith.

The Smith’s customers stage their own versions of the brand’s popular weekend brunch at home. The brand has had a large, enthusiastic brunch following since the opening of its first Manhattan location in 2007, Burke said. But management was initially unsure customers would accept a takeout/delivery brunch at home, minus the hospitality and socializing that happens in the restaurants.

However, the results have been a pleasant surprise.

“We quickly realized that people want to replicate the brunch experience as closely as they can at home,” said Burke. “For some of them, having that Bloody Mary that they have been craving all week is a big part of it.”

In addition, there are kits for Sicilian Eggs, Avocado Toast and parbaked biscuits to finish at home, as well as many lunch and dinner items.

Cocktail options for takeout or delivery to The Smith’s customers in New York include ready-to-drink bottled cocktails that serve six to eight drinks. Cucumber Loco is a mix of silver tequila, orange liqueur, cucumber, lime and salt, priced at $42. The Pool Party, made with gin, Italian bitter liqueur, grapefruit liqueur and lemon, comes with a bottle of prosecco sparkling wine for topping, priced at $48. A bottle of Bloody Mary mix that makes six to eight cocktails, mixed with the consumer’s spirit of choice, is priced at $12.

For brunch fans, ordering signature menu items and cocktails for home consumption restores a measure of normality in stressful and uncertain times. Many patrons have posted images on social media of their home brunches with The Smith’s food and beverage.

“People can recreate the experience with a lot of the good things they enjoy about brunch,” said Burke.

More than 30 states and the District of Columbia have passed legislation allowing restaurants and bars to sell cocktails to-go, bottled spirits or both, according to Distilled Spirits Council of the United States.

A total of 21 states and the District of Columbia are allowing restaurants and bars to deliver spirits in some form. In addition, 15 states plus D.C. are now permitting curbside spirits pickup from restaurants or bars.

In June, Iowa became the first state to allow cocktails to-go permanently and Texas, Florida, Ohio, Oklahoma and D.C. are considering making some off-premise spirits policies permanent. In the other states, the legislation has varying expiration dates.

Breakfast Republic, a chain of 10 breakfast and brunch restaurants based in San Diego, started selling alcoholic beverages to-go “the minute they allowed it” this year in California, said CEO Johan Engman.

The most popular choices are Bloody Marys and Mimosas, but the full bars in the restaurants will pack any beverage to travel. The drink list includes draft beer by the growler, Mimosas made with cranberry, grapefruit or fresh-squeezed orange juice and specialty drinks like the Morning Mule, a mix of vodka, lime juice, ginger beer and cherry-apple bitters. The law requires mixed drinks to be sold in plastic containers with solid lids that are sealed with tape.

“We always verbally indicate that the same laws apply to this beverage,” says Engman. “You cannot consume it on the street or in your car, only at home.”

“When they made that change, it was great,” he added. “I can't say our sales jumped, but we certainly saw a boost in our average takeout ticket. But at the end of the day, it doesn't really change our bottom line.”

The reality is, a restaurant may have 50% fewer revenue-producing seats, yet still have high labor costs due to the extra cleaning and sanitizing that regulations now require, he said.

“So, yes, it’s great that we can sell a couple of things to-go that we weren’t allowed to before,” said Engman. “But I don't think it makes up for the added cost of running the business now.”

He has seen a change in consumer drinking habits. “When we were first allowed to reopen for takeout only after being completely shut down, we sold more prosecco and brut [sparkling wine] in that first week than we ever had before,” said Engman. “People were just celebrating.”

The continuation of alcohol to-go on a long-term basis “would make a lot of restaurant operators, including myself, very happy,” said Engman. “We would do everything to sell and serve it responsibly.”

With operators mastering simple drinks like Bloody Marys and Mimosas to-go, the stage is set for libations with more complex recipes and flavor profiles.

“I think you are going to see a lot of innovation in the to-go game over the next year, if people are still really uncomfortable with sitting down at restaurants, inside or outside,” said Vinny Starble, a Chicago restaurant beverage manager.

Starble sees potential in to-go kits for spritzes and Old Fashioneds, the latter made with lower-proof spirits, better for daytime consumption. Spritzes — refreshing mixtures of bitter liqueurs and sparkling wine or bubbly water — are on-trend today.

“A spritz kit would be easy to make with a little bottle of sparkling water that the customer uses to top off the drink to add dilution,” said Starble.

Looking ahead, Starble foresees alcoholic beverages to-go and cocktails on draft growing in importance as restaurants and bars adjust to a radically different business climate.

“In addition to what needs to be done now to maintain health codes and keep people safe, I think we will see a lasting change in the way the hospitality industry hires and staffs,” said Starble. “We’ll see fewer people working and new systems geared for greater efficiency.”

If a restaurant can afford to employ only one bartender on a shift now instead of the two or three it formerly had, service inevitably must change.

“Being able to grab a drink that’s ready to go quickly and efficiently will help,” said Starble. “A lot of restaurants are trying to make margins work in an industry where it is very, very difficult to be profitable.”