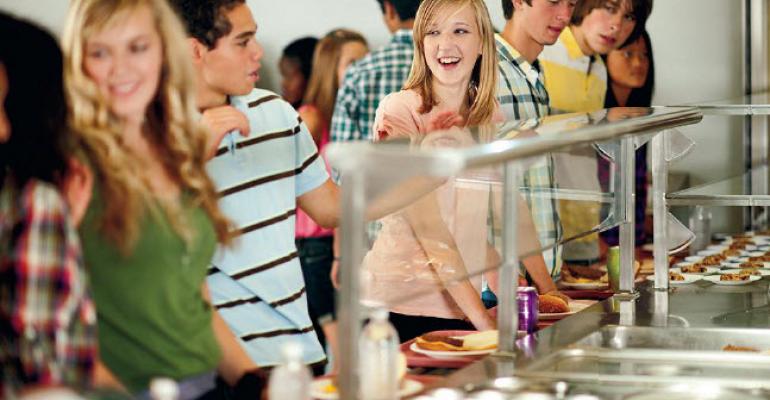 Operators that want to boost breakfast sales can look to teenagers as a key demographic. Not only are teens famously hungry, but they are eager to try new foods. They also like to post photos of menu items on social media, which helps generate buzz about an eatery. Most importantly, teens have demonstrated a willingness to spend money on eating out.

In fact, teens are spending more money on food than on clothing. That’s according to Piper Jaffray's biannual Taking Stock With Teens study, released in April. The study found that  teenagers in households with incomes over $100,000 are spending 24 percent of their cash on food, which was more than the amount spent on clothing by 4 percentage points. Teens from average-income households that have a mean income of $56,000 are spending about 21 percent on food, 2 percentage points higher than their clothing spend.

Operators say these young consumers want foods that help them get started in the morning, and are fun and delicious. That often means sweet items. This summer Oklahoma City-based Jimmy’s Egg launched iced coffees  in Original, Chocolate Fudge and Cinnamon Roll. Marketing manager Mendi Landgraf says these were a big hit among teens, which made sense considering what young consumers usually eat.  “Our Cinnamon Roll pancakes are number one with them, and then the Reese’s pancakes,” she says. “Sweets are a natural.”

Teens are also generally an active bunch, so they often order hearty foods. They also like to customize. Another popular item at Jimmy’s Egg is the Queso Blanco Burrito, which consists of three eggs scrambled with sausage crumbles, onions, tomatoes, potatoes, green onions, and green chiles, topped with white queso, tomatoes, and green onions. “It has potatoes in it but a lot of times they want hash browns,” Landgraf says. “They love the fact they can put things on, take things off, and we make sure they get what they want.”

While portion size and flavor are important, the food’s appearance is crucial to this age group. “The biggest thing we see is it has to be Instagrammable,” says Tim Burke, owner of In A Pickle in Waltham, Mass. “We look for ooey, gooey, chewy. We take really good pictures and put it on our Instagram and Facebook and teens seem to gravitate to that.”

Extreme pancakes are especially photo-worthy, so In A Pickle offers specials such as Holy Moly Cannoli Cakes, which feature two cannoli on top of a stack of pancakes, and cannoli filling in the pancakes. “We see tons of high school kids tagging each other and losing their minds over it,” Burke says. Another recent Instagram hit was Extreme Birthday Cake Pancakes, which had birthday cake between the pancakes.

Some of the extreme breakfasts are large enough to share among a table. This taps into another teen trend, which is they want enjoy not just breakfast but an experience they shared with their friends.

The large portions and the nontraditional ingredients might generate higher food costs than a typical breakfast item, but Burke says he saves money on marketing costs. Teens take photos of the food, share the photos on social media, and the restaurant gets attention for the breakfast special each week. Wait staff help by alerting the table when the food is almost ready. “We tell them, ‘Your food is coming out, get your phones ready,’” Burke says. “They sit there for a good minute or two before they eat it. They really want to have an experience and they want you to know they were there.”

Take It To Go

Also according to the Piper Jaffray report, teens are switching to fast food and fast casual. In spring 2009, 57 percent of teens preferred full-service restaurants. That changed over the years, and in spring 2018, 65 percent of teens said they prefer to eat at a limited-service chain. One feature that teens like about limited service is that they can order the food to go.

This increased need for convenience is also affecting what teens select in school foodservice. Teens are busy, so portable breakfasts are essential. According to the School Nutrition Association (SNA)’s “School Nutrition Operations Report: The State of School Nutrition 2018,” a report based on survey responses from 1,550 school districts nationwide, late breakfast, breakfast outside the cafeteria, and other nontraditional breakfasts are gaining popularity because students often cannot get to the cafeteria in time before class begins in the morning.

Among the schools that offer breakfast services via alternative venues, 40.8 percent of high schools offered grab and go breakfast outside the cafeteria in 2018, up from 34.1 percent in 2016. Grab and go inside the cafeteria was available in 35.9 percent of high schools, up from 31.3 percent in 2016. “A lot of menu innovations are around that,” says Diane Pratt-Heavner, director of media relations for the SNA. “How do you make that healthy breakfast a grab and go item?”

Smoothies and parfaits are particularly popular at grab and go kiosks. Parfaits contain half a cup of fruit, which helps the school meet standards for the amount of fruit kids are offered in school meals. Egg sandwiches and sandwiches with meat alternatives are also favorites, as they contain protein. “They are popular with students because they keep hunger at bay until lunch time,” Pratt-Heavner says.

The customization trend affects how foodservice operators plan menus. Arlinsky says another trend is the schools are increasing participation in foodservice programs by asking students what they want to eat, then offering breakfast items that look good, taste good, and include their ideas. “Students love when their voice is heard,” Arlinsky says. “After all, they are the customer.”

Every Breakfast Deserves a Second Chance

Gaithersburg, Md.-based Sodexo recently launched the high school foodservice concept Taste4, based on consumer insights from Generation Z, and focus groups with students from across the country. Grab and go was, once again, a recurring theme in what teens want. For convenience, sandwiches are always good, and sometimes students want something new.  One new breakfast item is the Omelet Burger, which is an omelet with roasted ham and cheese on a hamburger bun. “It’s a softer bread than other breakfast sandwiches,” says Chef Michael Morris, senior brand manager. “Biscuits make a really decent sandwich but they are hard to eat. As you’re standing and walking and moving the biscuit tends to fall apart.”

Just as all-day breakfast is becoming mainstream in commercial foodservice, breakfast for lunch is gaining as a trend for teens in school foodservice.

“Some of our high schools because of their size they have to start lunch at 10:15 in the morning, and students are not quite ready for a hamburger or French fries or spaghetti,” Morris says. “They are still kind of waking up, and they’d love an omelet with potato hash and roasted cinnamon apples.” (The roasted cinnamon apples are a popular side, Morris says, because they are like crustless apple pie.)

Sodexo’s research indicated that fresh food, flavorful options, and spending time with friends in a fun environment are the most important elements to the school lunch experience. With this in mind, one of the new features of Taste4 is a pop-up called Overslept. The breakfast-for-lunch concept is getting positive response from students who missed breakfast but who still want to eat a morning meal with their friends. “They have more time during the lunch period,” Morris says. “They go from hand held items in the morning to a plated home style sit down type of breakfast when they’ve got just a little bit more time to slow down and take in a full meal.”

Whether it’s grab and go for busy schedules or elaborate social media worthy menu items, breakfast is an important daypart for teens, and operators that adapt to this emerging demographic can thrive in an ever-competitive environment.