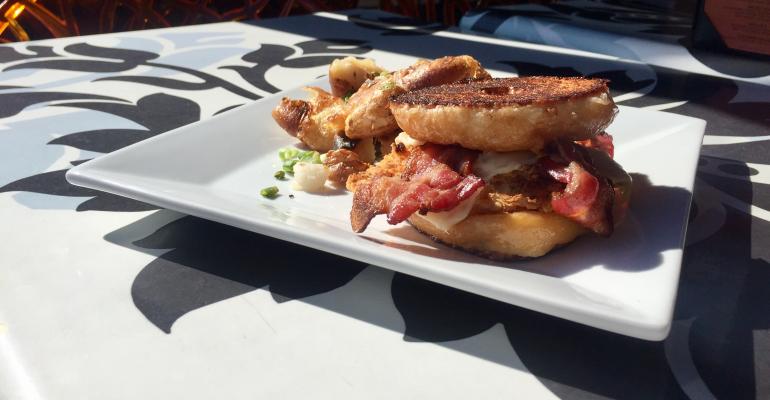 Trends in breakfast proteins include some versatile meats from other dayparts, and updated versions of longtime favorites.

When it comes to breakfast proteins, bacon and sausage are still many people’s favorites, but operators are menuing other meats as consumers seek variety. Chefs are utilizing different presentations of pork at breakfast, adding chicken as a breakfast selection, and incorporating other trends such as local, house-made and healthy in their protein choices.

According to research firm Datassential’s MenuTrends, both chicken and pork fall into the top 10 most menued breakfast proteins and are the only two among the top 10 showing double digit growth over the past four years. Items like braised pork increased 137 percent on breakfast  menus; pork belly increased 130 percent and pork tenderloin increased 44 percent.

In addition to healthy and house-made, local is another trend that is influencing breakfast proteins. Sequoia Diner also offers house-made bacon, pork sausage and chorizo. “We are able to buy really high quality pork bellies from a small farm in Washington,” Vennari says.

One longtime variation of chicken at breakfast is chicken apple sausage. At Matt’s Big Breakfast, with four  locations in the Phoenix area, a popular item is The Skinny, which is four egg whites scrambled with Gruyere cheese, local organic baby spinach and chicken apple sausage cooked in olive oil and served with organic mixed greens. “We wanted to create something healthy that is savory and uses great ingredients,” says Matt Pool, who owns the restaurants with his wife Erenia. “People are eating low carb or paleo diets.”

Chicken is also appealing to operators because unlike the sage and black pepper sausage links that are typically used for breakfast only, chicken can be used in other dayparts. At University of Washington Seattle, the Chicken and Waffles is made with chicken thighs. Thighs are juicier and fattier than chicken breast, says Tracey MacRae, campus executive chef. The thigh is also more affordable and can be used in other meals. “We can use it for rice bowls at lunch, or roll it into a burrito,” she says.

Bacon is still very on-trend, MacRae says, including innovative versions. “We have beef belly bacon, and we try to source that to be halal for our halal friends,” she says. For other diners, there is pork shoulder bacon, which MacRae says is similar to peameal bacon or English style. For vegans, there is a wheat-based meat analog.

Some proteins never go out of style, and at District Market, an on-campus grocery store, the English muffin with bacon and egg or ham and egg is still a big seller. “We sell 300 of those breakfast sandwiches a day,” MacRae says.

Even chicken and waffles can be reimagined. Born and Raised, with locations in Las Vegas and Henderson, Nevada, offers a Fried Chicken and Donut Sandwich. Executive chef Aaron Raeder says he did not want to have a waffle iron turned on all day in the kitchen, so instead he takes donut dough and sears it on the griddle. The sandwich also has pepper jack cheese, bacon, whiskey syrup, and is served with a side of smashed red potatoes. The sandwich has been on the menu for almost three years, and social media has boosted its popularity. “Especially now in the Instagram age, it’s a cool picture to post,” Raeder says.

Raeder also likes to use Spam, such as in Loco Moco, a Hawaiian dish that features white rice, brown gravy, fried eggs, and a choice of Spam or ground beef. Customers order this for breakfast, which for shift workers and others could be any time of day. “Vegas is a 24-hour town,” he says. “If people want to go out and have breakfast, for them it’s morning.”

Breakfast pizza is another meal that helps blur the lines between dayparts. Nashville, Tenn.-based  Hunt Brothers Pizza, which has locations inside convenience stores, offers a breakfast pizza that consists of scrambled eggs, bacon, breakfast sausage, mozzarella and cheddar cheese on a buttered crust. “We know that ‘brinner’ or ‘breakfast for dinner’ is a beloved meal for many Americans,” says Dee Cleveland, senior marketing manager. “Hunt Brothers Pizza is embracing that by bridging traditional breakfast foods like scrambled eggs and sausage with a non-traditional breakfast food, pizza.”