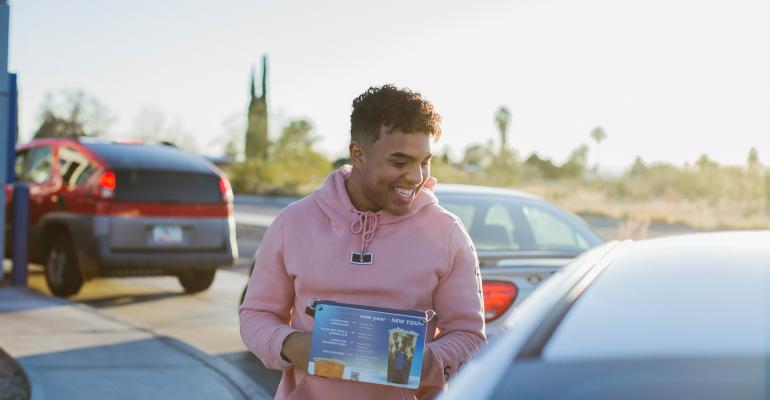 The morning commute is back – with a twist

People are heading back to work and school, but what they want for breakfast on busy days has evolved.

As many workers ease back into working at the office — at least a few days a week — there is growing demand for breakfast options that are fast, affordable, portable and convenient.

The pandemic changed how, and whether, people commute, and foodservice operators are responding with revamped hours, convenient off-premises options, and new menu items. What they’re looking for in a quick workday breakfast is changing, too, and restaurants are adjusting their menus and operators to accommodate them.

“The morning commute is sort of back,” said John Graham, chief marketing officer of Dutch Bros Coffee. “We have seen customers move back more strongly into the morning.”

As commuters return to their morning drives, the Grants Pass, Ore.-based chain is seeing changes in consumer preferences. One such change is the emergence of cold drinks as morning pick-me-ups, as people turn to energy drinks, blended beverages, and non-coffee options to start the day. Cold drinks offer a fun canvas for flavors, toppings, and other extras, Graham said: “With cold you are encouraged to experiment,” Graham said.

Another key change is the explosive growth of drive-thru, which became crucial during the COVID-19 crisis and shows no sign of slowing down. Dutch Bros, which has been in the drive-thru business for 30 years, plans to add more units.

“We haven’t adapted as much as expanded,” Graham said. “Drive-thru is here to stay.”

Even chains that do have dine-in capabilities, the drive-thru is key.

“Over the last six to eight months, we have definitely experienced heavier breakfast traffic during the typical morning commute,” said Ulyses Camacho, chief operating officer for Taco Cabana. The greatest percentage of breakfast traffic was always through the drive-thru, Camacho said, and the brand does not expect to see its dine-in numbers return to pre-COVID levels.

To remain competitive in the crowded breakfast segment, Taco Cabana has focused on drive-thru speed-of-service during breakfast hours. The San Antonio, Texas-based brand adjusted its labor schedules so that more team members work during heavier hours of breakfast throughput. Staff also preps more breakfast items the previous night, so that the morning breakfast rush is better prepared and more streamlined.

One new trend is the heaviest morning breakfast traffic and transactions moved 30 minutes later. Pre-COVID, the busiest time was 6 a.m., when locations opened, and now it’s busiest at 6:30 a.m. That might be partly due to offices reopening with more lenient policies regarding start times and working from home. Another impact of offices reopening, Camacho said, has been an increase in sales of the Dozen Taco Box orders.

“Breakfast has and remains a vital and strategic percentage of our overall business,” Camacho said. “It’s a daypart that we spend concentrated efforts to defend and build through innovation and operational excellence.”

In urban areas where pedestrians are buying breakfast, operators are seeing certain trends. Black Seed Bagels has locations in New York City, including one in Rockefeller Center. That location is seeing sales that are better than pre-COVID sales, even though the office building has only about half of its workers onsite, as recorded by security badge swipes. “That means that location gets tourists,” said co-founder Matt Kliegman. “There is less competition for breakfast, as some places have closed.”

In some neighborhoods, there are more employees in office buildings because employers are making the return mandatory. Black Seed Bagels plans to open a location in midtown Manhattan, among financial firms and law firms. “There I suspect their bosses are saying, ‘You’re coming back to work now,’” Kliegman said.

The morning commute is in flux, as more offices reopen and workers decide how to respond. For some Black Seed Bagel shops, the morning rush might move earlier or later, so staff numbers need to be adjusted. “Being flexible is critical,” Kliegman said.

South Korea-based Paris Baguette, which has locations in New York and nationwide, has also seen the need to adapt to customers’ changing schedules.

“In many cases we saw demand between 7 and 8 beginning to surge,” said Nick Scaccio, vice president of operations. “We began testing opening at 6 and 7 a.m. and in some cases even earlier, to capitalize on the early morning coffee business which has been strong for us.”

The brand, with U.S. operations based in Moonachie, N.J., did a brand redesign earlier this year, and added new breakfast pastries to the menu.

“We never stopped innovating during the pandemic,” Scaccio said. “On the R & D side, we continue to launch new products each year.”

In the suburbs, people are commuting, but that’s not stopping them from enjoying a sit-down breakfast.

“We continued to experience traffic growth during a majority of 2021 while many were continuing to work from home,” said Matt Eisenacher, senior vice president of brand strategy and innovation for First Watch.

A majority of the Bradenton, Fla.-based brand’s locations are in suburban areas.

“We’ve seen this trend continue with the uptick in commuters, and we’ve optimized our business to best serve all occasions, whether a weekend brunch gathering of friends, a business lunch or for those grabbing a quick bite to go on their morning commute.”

As people return to workplaces, consumers are being very intentional about where they choose to spend their money.

“We’re seeing an increased importance on the experience, connection, and community when consumers are deciding where to dine out,” Eisenacher said.

Breakfast is an important part of the day in college and university dining. As students return to campus, the social aspect is as important as grabbing something to eat.

“You have students who do want to eat on the go and get their handheld food,” said Joan Bauman, executive director of dining services for University of Dayton in Ohio. “Some want to sit down and relax.” She added that students don’t like to get up early, and if they have to, they go to class first and then sit down and have breakfast with their friends.

The University of Dayton has a retail setup in its dining services (not all-you-care-to-eat), so students are also looking for value. Breakfast sandwiches are popular throughout the day because they are tasty and have a lower price point than other lunch and dinner items. “They think, hey, I can get filled up on a breakfast sandwich,” Bauman said.

As commuting routines have changed, so has onsite foodservice. Companies are working with foodservice operators to develop new ways to feed employees. “I don’t think we are ever going to see the typical nine to five worker ever again,” said Scott Keats, director of culinary strategy for Aramark Workplace Experience Group.

Although higher education, sports stadium concessions, and K-12 accounts are seeing their dining populations return, corporate dining is challenged with lower numbers of workers heading back to workplaces. “Our industry is still in a state of yes, no, maybe,” Keats said. “It varies across the country, and by the different types of businesses we support.”

Employers are hosting catered events and offering food-related perks to encourage workers to resume their commuting routine and come back into offices, especially during unpopular days of the workweek.

“They are trying to figure out how to entice people to come into offices on a Monday, on a Friday,” Keats said. “They are using all these different ways to attract people to come back into the building, because they are paying rent 365 days of the year.”

These companies know that they need to do more than provide coffee and muffins.

“They are creating an experience,” said Margaret Occhipinti, director of culinary development for Aramark Workplace Experience Group. “There has to be a reason to come in.” Client companies look to Aramark for themed events, entertainment, and team building experiences.

Young workers want to come in, because many were hired during the pandemic and have not met their coworkers in person or seen their new employer’s office setup.

“The younger demographic is so excited to be there,” Occhipinti said. “They have never been in an environment with all these amenities.”

Food is a powerful lure for this group because they are adventurous eaters. They want bold flavors, global foods, and health-focused foods and functional foods.

The younger generation has FOMO, or fear of missing out, Keats said, so they are making their way back into the office. In fact, people of all ages are returning to the office, somewhat.

“I don’t know if it will be five days a week, or it could be Tuesday through Friday,” he said. “It’s going to be a moving target until people become comfortable.