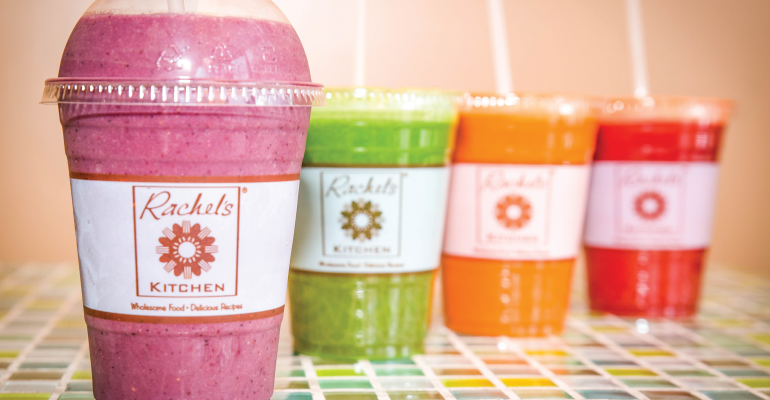 Consumers seek out premium beverages for their perceived health benefits.

Whether it’s a smoothie, fresh-pressed juice, or coffee or tea, a breakfast beverage can do more just than hydrate. And consumers are increasingly looking for functional beverages that make them feel satisfied and lend purported nutritional benefits.

Restaurants are developing new drinks that feature everything from superfoods to spices, and they’re finding that beverages with a health halo can have particular appeal at breakfast.

“If we can put all our ingredients in a shake in the morning, we feel fortified and energized,” said Alexis Schulze, co-founder and chief visionary officer for Nékter Juice Bar, based in Santa Ana, Calif.

And while the impact these beverages have on consumers’ health may be up for debate, there’s no disputing the fact that they do good things for a restaurant’s bottom line. In fact, 38% of operators who are seeing higher sales of nonalcoholic beverages attribute the sales increase to the push for more functional menu items, research from Datassential shows.

Consumers are buying smoothies and juices as on-the-go items, said Debbie Roxarzade, owner and founder of Las Vegas-based Rachel’s Kitchen. The fresh juices are customizable, and people order them online for pickup. The juices start with apples, carrots, cucumbers or pineapples for the base, and then customers select add-ins such as beets, cucumbers, cayenne pepper or ginger root.

“People think when they drink something green it’s better for them,” Roxarzade said, adding that the Green Smoothie is in fact a healthful option. “It’s literally just vegetables and fruits going through the juicer. It tastes great.”

Parents also find the green beverages, especially smoothies, to be a good way to get their kids to eat fruits and vegetables.

“Smoothies are a little bit sweeter because they have honey or yogurt in them,” Roxarzade said. “It’s more of a treat.”

“More people are moving towards smoothies and juices in the morning, maybe for something lighter to grab and go and have on the road,” she said.

Celery is gaining popularity for its reported health benefits.

“Intermittent fasting has picked up steam in the last few years, so many people choose to have only a celery juice in the morning and wait until later in the day to eat a meal,” said Kat Eckles, co-founder and chief branding officer for Charlotte, N.C.-based Clean Juice.

Cold-pressed celery juice is also a favorite among people who are doing the celery juice challenge, which entails drinking celery juice every morning, and is purported to increase metabolism and detox the liver.

Consumers also look for elevated versions of their favorite juices. The Orange Cold-Pressed juice is a big seller because everyone is familiar with orange juice, and the Clean Juice version has carrot, orange, pineapple, and turmeric, all organic. Coffee with added nutritional ingredients is also a big seller, and a smoothie called The Coffee One contains almond butter, almond milk, banana, cold-brewed coffee, and dates — all organic.

“People are starting to realize that when they don't eat a huge, heavy breakfast, they start their mornings fresh and not bogged down, allowing them to achieve peak performance in their workout, job, energy,” Eckles said. “Clean Juice really values organic, and we believe that our guests come back day after day because of how great they feel when they aren't flooding their body with pesticides first thing in the morning.”

Ready for their closeups

Schulze of Nékter Juice Bar said consumers are looking for not only functional beverages but also visually appealing, Instagrammable drinks. People like to post photos of the nutritious breakfast they are drinking, and if it’s a great color, all the better.

That partly explains the popularity of pitaya, or dragon fruit, which is rich in iron, magnesium, and fiber, and also has a bold pink color. At Nékter, pitaya is available as a boost for its smoothies, as are other ingredients such as hemp protein, pea protein, gluten-free granola, chia seeds, and others. Also available is a smoothie called Pink Flamingo, which blends pitaya, strawberry, pineapple, agave nectar, and coconut water.

One drink ingredient that’s popping up more frequently on beverage menus is turmeric, a brightly colored spice best known for its place in Indian cuisine.

“Turmeric is king,” said Jeffrey Quasha, the corporate research and development chef for Atlanta-based Morrison Healthcare, a Compass One company.

“Turmeric latte is one of the biggest trends over the last year.”

Turmeric is known to have anti-inflammatory properties, so people look to it as an alternative to ibuprofen for pain and swelling. The turmeric latte can also be made into a smoothie, such as Morrison’s Banana Mango Turmeric Smoothie, which has almond milk and is sweetened with agave.

Quasha said other on-trend ingredients point to current diets and lifestyles. The ketogenic, or Keto Diet is getting much attention, so Morrison Healthcare trains its staff on what the diet entails, which is high fat and low carbohydrates. That way, Quasha said, when someone orders a Bulletproof Coffee, a popular drink among those on the diet, staff will know that means coffee with butter or ghee and MCT oils.

A number of consumers — particularly Millennials and Gen Z consumers — are also steering clear of sugar. Less than half, or 48 percent of consumers, associate 100 percent juice with being healthy because of its sugar content, according to research from Mintel. Furthermore, nearly four in 10 consumers are seeking qualities such as no added sugars, no artificial ingredients, and no high fructose corn syrup.

For those following seeking easy ways to get more protein in their diets, Juice It Up! offers The Zone smoothie, which the brand said contains more protein than three chicken breasts.

“Now, we are sure there are some out there who don’t mind eating three chicken breasts for breakfast, ” said Noah Burgess, nutritionist and research and development scientist for the Irvine, Calif.-based chain. “But we are happy to offer this delicious alternative.”