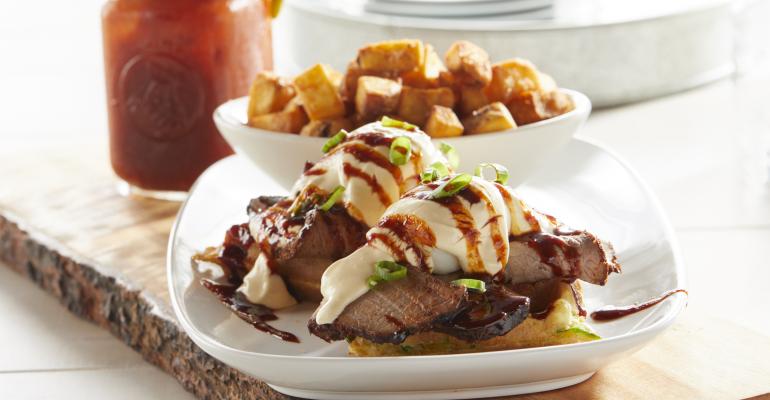 A jalapeno cheddar waffle is a flavor upgrade over the customary English muffin in Another Broken Egg Café’s Brisket Benedict.
Breakfast Journal

Breads Rise to the Top at Breakfast

Bread, arguably humanity’s most familiar and basic food, can be an exciting platform for signature breakfast and brunch items.

This versatile menu category, which includes quick breads as well as yeast-raised bakery products, fits a variety of mood states, flavor cravings and dietary regimens. Operators tempt indulgence-seeking brunch crowds with sweet pancakes, French toast, muffins and waffles. For the nutrition minded, they offer a growing array of whole grain breads and rolls. In some cases, they are decreasing the size of breads and pastries to encourage customers to sample more and control consumption better. And across the board, creative menu makers are using innovative bread platforms to enliven breakfast sandwiches, eggs benedicts, skillets and many other breakfast applications.

Toast is the most common bread type on restaurant breakfast menus, served at 48.9 percent of restaurants that offer breakfast, according to Datassential. Other prevalent types are tortillas, biscuits, bagels and English muffins, all of which are found on more than 30 percent of breakfast menus. Topping the list of fastest-growing bread types on breakfast menus is pretzel bread, with a four-year growth rate of more than 90 percent, albeit from a small base. Also on the rise are flatbread (up 42 percent on breakfast menus), whole wheat tortillas (up 37 percent), brioche (up 32 percent), cornbread (up 28 percent) and baguettes (up 26 percent).

The versatility and wide appeal of breads like those are leveraged in a growing number of signature dishes. An example is the Brisket Benedict, a seasonal offering at Another Broken Egg Café, a breakfast, lunch and brunch chain based in Miramar Beach, Fla. In this dish, a jalapeno cheddar corn waffle replaces the customary English muffin, adding a distinctive flavor and texture as the platform for slow-cooked brisket, poached eggs, hollandaise and spicy barbecue sauce. “Our practice is to break down classic dishes into their simplest form and introduce other ethnic flavors,” says Jason Knoll, vice president of culinary.

Running its own distinctive riffs on eggs benedict is First Watch Restaurants, a University Park, Fla.-based restaurant chain serving breakfast, brunch and lunch. Its limited-time Barbacoa Benedict features toasted ciabatta bread as the base. “We like the ciabatta because of its nooks and crannies and slightly sour taste,” says Shane Schaibly, vice president of culinary strategy and corporate chef.

Breakfast operators also report a large, enthusiastic customer base for French toast, pancakes and waffles. Operators have long borrowed syrups, sauces, toppings and garnishes from the world of desserts to make these indulgent favorites even more craveable.

Denny’s, the Spartanburg, S.C.-based family dining chain, is packing them in with its Premium Craft Pancakes line. Two of the favorites, Dulce de Leche Pancakes and Tres Leches Pancakes, take cues from sweet Hispanic treats. “There is a certain consumer who is looking for indulgence in the breakfast occasion,” says John Dillon, senior vice president and chief marketing officer at Denny’s.

Dulce de Leche Pancakes have cinnamon-crumb topping cooked into them, and they are topped with whipped cream and served with salted caramel topping. Tres Leches Pancakes are cooked with cinnamon sugar and crowned with a scoop of horchata ice cream, made with the cinnamon-flavored rice milk beverage horchata. Whipped cream and a side of warm cream sauce round out the presentation.

Also leveraging the sweet appeal of pancakes is IHOP, the Glendale, Calif.-based family dining chain. Its Tres Leches Pancakes are the best seller of the IHOP International Pancakes line. “Our version uses a beautiful vanilla cream and a dulce de leche that soak in,” says vice president of marketing Alisa Gmelich.

Future IHOP breakfast specialties may go further down the path of sweet, indulgent, and possibly spicy flavor profiles. “We’re seeing that combination of sweet and spice come together,” says Gmelich. “People love heat and interesting spices and flavors. That’s where we see the trends going.”

“People are certainly enjoying their breads,” says Simon Stevenson, director of bakeshop operations and executive pastry chef at the University of Massachusetts Amherst. On his watch, baked goods are prepared for 30,000 consumers each day. He sees rising student interest in whole grains in general and particularly in artisanal grains such as buckwheat, amaranth, sorghum and teff, which are often used to enrich multigrain breads and rolls.

“When you introduce those types of grains to this age group, in the small amounts we do, it accustoms their palates to those sorts of flavors,” says Stevenson. “So they do not shy away from them like our age group did when we went to college. They are much more interested in them and much more accepting of them.”

In addition, UMass makes a variety of crowd-pleasing quick breads, like espresso coffee cake, cinnamon chip pull-apart rolls, hazelnut chocolate bread and a wide array of muffins. Among yeast-raised products, favorites include cranberry grain bread, cranberry orange bread and pumpkin nut bread, typically used in the dining commons for French toast and for slicing and toasting. On top of that, UMass has introduced a new item called the scuffin — a cross between a scone and a muffin, with an appearance like the former and an interior texture like the latter. “We are putting dried fruits and whole grains in that as well,” says Stevenson. “It gives us another breakfast option to offer.”

At Michigan State University in East Lansing, Mich., where the dining halls serve about 35,000 meals per day, MSU Bakers supplies about three-quarters of the bread needs. Bagels are extremely popular. The shop makes 300 dozen per days. “Our bagels are definitely the breakfast bread of choice,” says Cindy Baswell, manager of MSU Bakers.

One of the practices gaining currency in campus dining is offering a greater variety of baked goods, but in smaller portions. That encourages students to try more different types of products while controlling how much they eat. “If the muffins and croissants are smaller, perhaps you can eat one still have an avocado schmear, a little salmon or some Greek yogurt for breakfast,” says Garett DiStefano, director of residential dining at UMass.

Other baked goods opportunities for breakfast and brunch may be found in ethnic and American regional cultures. For example, Latin-American cuisines, which are growing in popularity, offer many options to consider.

“Mexican pastries are fun and colorful and have unique names and shapes,” says Sofia Sada Cervantes, lecturing instructor in culinary arts at The Culinary Institute of America in San Antonio, Texas, and a native of Mexico. “For me, personally, they take me back home.”

A few that she suggests are conchas, which are colorful, seashell-shaped sweet rolls; orejas, puff pastry ears dusted with cinnamon sugar; campechanas, sweet treats with thin, flaky layers; and muffin-like mantecadas. “There are so many types, it’s endless,” says Sada Cervantes.

Sada Cervantes sees significant potential to showcase such items at breakfast and brunch. “I think having a basket of Mexican pastries in the middle of the table at the start of a restaurant meal is very inviting and would make people feel very comfortable,” she says.

Operators can also profit by rediscovering traditional American baked goods. One who does is Paul Fehribach, chef and co-owner Big Jones, a restaurant in Chicago that explores Southern culinary heritage. His brunch menu includes 18th century colonial cornbread muffins, popovers from a recipe by cookbook author Edna Lewis and a centuries-old English yeast bread called Sally Lunn that is a staple of the Southern table.

“When we started cooking Southern food in the North, we quickly learned that most people need a little education in what Southern cuisine really is,” says Fehribach. “Through ingredient and recipe citations of our breads we are able to make that a fun and interesting part of the dining experience, in addition to being downright delicious.”