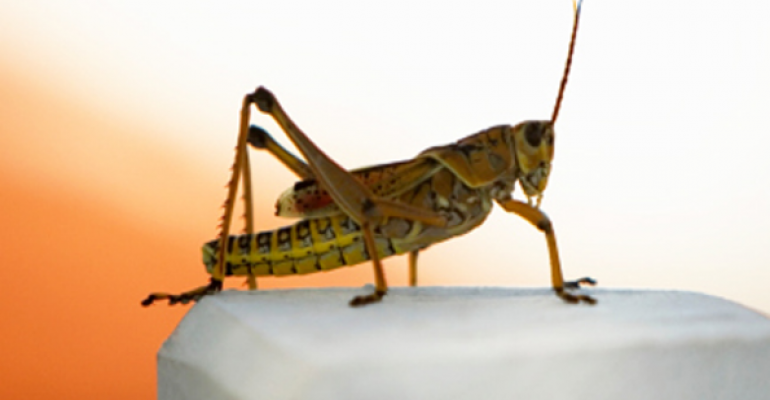 You have some cricket on your teeth

Do you think your customers would be interested in a sustainable source of protein with a toasty, nutty flavor that’s already enjoyed by billions of people in Latin America, Asia and Africa? What if it also were a good source of calcium and other assorted minerals, as well as fiber?

Would you feel differently if I told you I was talking about insects?

The gross-out factor among Americans when it comes to eating six-legged creatures with exoskeletons is even more palpable than it is irrational. And it seems so arbitrary. We happily eat such ten-legged scavengers (eww!) as shrimp, crab and lobster. We slurp away at raw oysters and clams. American sushi lovers have developed a growing affection for sea urchin. In fact, all of those invertebrates are delicacies. Why not beetle, or cricket, or succulent caterpillar?

One reason is that, in my experience, insects don’t taste very good. Another is that their texture is problematic. I ate tobacco hornworm, which is actually the caterpillar of the Carolina sphinx moth, about 15 years ago at the Denver Museum of Nature and Science, following a lecture about eating insects. It was acrid (the caterpillar; the lecture was pretty interesting).

I ate some sort of salted roasted beetle in northeastern Thailand. It was salty and crunchy on the outside, which is fine, but it was mushy on the inside, which is not desirable.

Also, it was an insect and I’m an American, and no matter how cosmopolitan I try to be, and although I’m happy to suck out a shrimp head or the vitreous of a fish eyeball, insects are not things I want to put in my mouth.

But Americans’ aversion to consuming terrestrial arthropods might be changing. At the very least, some companies are betting that they can convince us to eat insects, and one food trend-spotting firm thinks they’re right.

Kimberly Egan, chief executive of CCD Innovation, told me that enough societal drivers are in place that insects are a trend with legs — although it’s one that’s likely to catch on more if we don’t actually see the legs.

Mexican restaurants on both coasts are serving cricket tacos with more frequency than they once did (I’ve tried them, they taste like whatever they’re spiced with), and several small companies have started grinding crickets into flour and cooking with them. Chapul in Salt Lake City and Exo in Brooklyn, N.Y., are making protein bars out of the stuff, and Bitty in San Francisco is baking it into cookies and also selling the flour for people to cook with at home.

Bitty’s the company that describes cricket flour as tasting toasty and nutty.

Egan said the high protein content of insects is in line with current diet trends — they definitely fit into the paleo diet — as does the fact that they’re sustainable and reflect the global citizenship that many Millennials find desirable.

“There is more and more of an openness to the eating of insects … and I think part of this is that you’re no longer seeing the insects,” she told me.

Egan said she expects insect consumption to grow gradually and in ways that remove us from the actual idea of eating them. We might see vegetables dipped in insect flour and fried or baked, for example.

“I would say that in the next three years we’ll see some movement and cultural conversation about insect flour,” she said, adding: “Some consumers are recognizing that they’re probably eating some insects in their packaged goods, anyway.”

In fact, the U.S. Food and Drug Administration has acknowledged as much. The maximum allowable insect parts in food isn’t high, but it’s not zero. Tomato juice packagers can have as many as three fly eggs per ounce of juice. Raisins can have up to four fly eggs per ounce. Shelled peanut packers won’t be penalized as long as they have no more than one insect for every five pounds of peanuts, and packaged Brussels sprouts can contain up to 10 aphids per ounce.

Egan said she expects vegetarians and vegans to come around to eating them, particularly since they’re humanely killed through freezing.

My own informal poll of vegan and vegetarian friends indicated otherwise.

“Take a guess,” the vegan said (that meant no).

“They’re still living things,” one vegetarian said, not particularly interested in arguments about their nonsentience.

Egan acknowledged that we’re not likely to eat charismatic insects such as bees, butterflies and ladybugs. But crickets? Why not?

July 29: This story has been edited for clarity and to correct typographical errors.