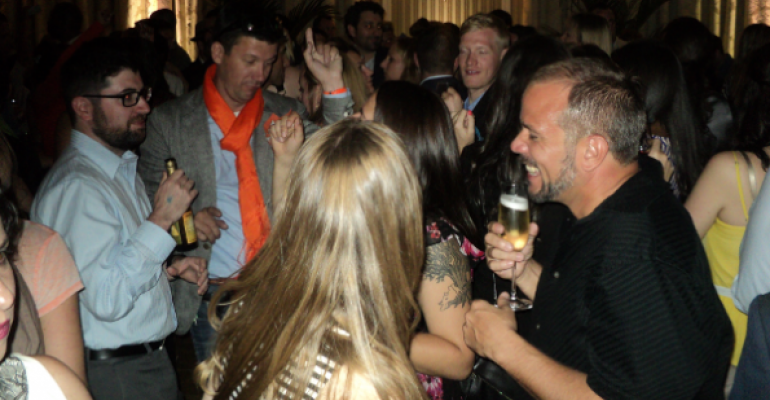 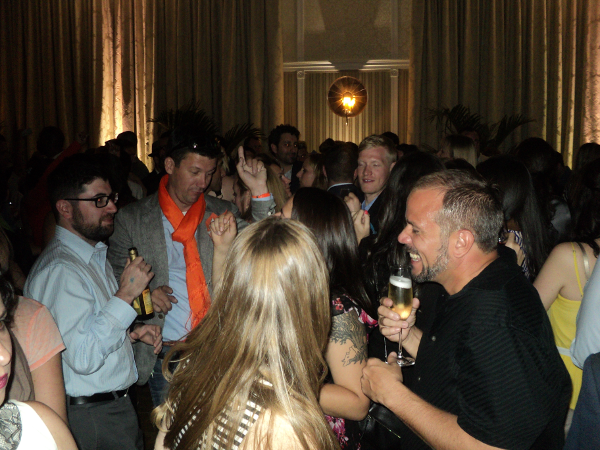 You might think the Food & Wine Magazine Classic in Aspen is just one big party with celebrity chefs, maybe resenbling the one in this picture that I took last night at the Last Bite Late Night Dessert Party (hosted by Gail Simmonds and featuring Johnny Iuzzini). Just by raising my camera in the air and hitting the button, I happened to capture an image of Top Chef Seattle contestant Bart Vandaele, chef and owner of Belga Café and B Too in Washington, D.C. He's the one in the orange scarf, raising his left hand in the air, possibly like he just doesn’t care.

Actually, the Classic is a bunch of parties like that, usually sponsored by a wine or spirits company pouring copious amounts of their product, to be drunk while eating food made by some of the most famous chefs in the country.

But that’s not why I’m here; I’m here to cover the American Express Restaurant Trade panels, which means I spend much of the day loooking at things like this: 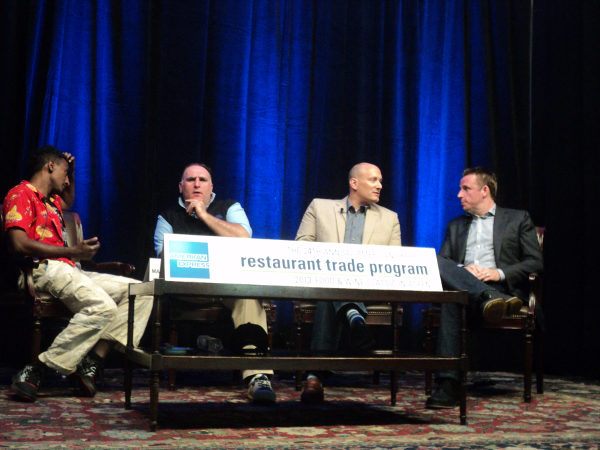 That’s celebrity chefs Marcus Samuelsson and José Andrés, on the left, with Cheesecake Factory president David Gordon and Marc Murphy, another celebrity chef, talking about cause marketing (I wrote about the panel here).

It’s a big draw for the Aspen event — AMEX representatives tell me about 450 restaurant operators attend the trade panels, which this year also included topics such as training and retaining staff (Mike Sanson, grand editorial poobah of NRN’s sister publication Restaurant Hospitality, wrote about that here), as well as discussions on social media and a chance for restaurateurs to get some media training. You’ll be reading about those on Monday, once our New York City staff gets back into the office to edit and post them.

That’s right, they get the weekend off while Mike and I toil away in Aspen, enduring the sunny 75°-85° weather and amusing banter with Claudin Pépin (you know, Jacques daughter), restaurateur Drew Nieporent, chef Chris Cosentino of Incanto (we chatted at the National Pork Board's party, eating sausage and charcuterie from Justin Brunson, chef of Old Major in Denver, who drove up to Aspen to cook for us, while sampling not-yet-released limited edition Colorado beer) and many of the other famous chefs who might come to mind.

And sure, at the party pictured above I danced a little with The Girl and The Goat’s chef Stephanie Izard and marvel at men brave enough to have their pictures taken with Marcus Samuelsson (he’s a handsome guy; the dudes will not look good by comparison), but I mean, it’s still work.

It’s a lot of work. In fact, I have to cut this blog entry short so I can stop by a few of the parties I've been invited to (it’s the polite thing to do) before I interview Empellón chef Alex Stupak and then take the gondola to the top of Aspen Mountain for the Best New Chefs party.