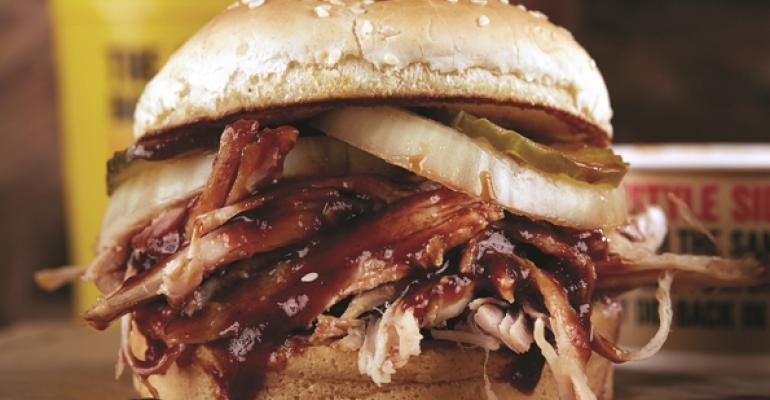 Why restaurants should keep things simple

Dickey’s Barbecue Pit decided to test a healthy menu in 2009. It was expanding into California, after all, and everybody there eats healthy all the time and would naturally reject the chain’s fat-laden, Texas barbecue. Or so the theory went.

The chain tried a selection of salads. One of them, CEO Roland Dickey, Jr., sheepishly admitted, was a tofu meatball salad.

“It didn’t work,” Dickey said. He was laughing as he told the story at the NRA Show on Saturday. But he also said that the test provided a good lesson for what at the time was a burgeoning chain on the way toward becoming the largest barbecue concept in the country, with more than 500 units. Just keep things simple.

“We’re not going to be all things to all people,” Dickey said.

It’s an important lesson for many chains, even some with many more units and a longer history of growth.

It can be easy to be tempted into menu expansion as chains search for ways to eliminate the alleged veto vote, or as they seek to court apparently healthy diners. Or even if they get too fancy with their limited time offers.

“So many brands get caught up in that,” Dickey said. “They try too many dayparts or try to appeal to too many people.”

Not long ago, Burger King once introduced 29 limited time offers in a single year, said Bennie Arbour, Jr., the CEO of 47-unit Burger King franchisee Goldco, LLC. More recently, it reduced the number of LTOs and ensured that menu items were simple to operate, with few additional products for franchisees to worry about.

“We simplified, got back to basics and concentrate on burgers, fries and drinks,” Arbour said. “And we can create new items with existing items on the menu.” He specifically mentioned the A1 Ultimate Bacon Cheeseburger.

The result: Sales at the chain have turned around, with same-store sales increasing 6.9 percent in the U.S. and Canada in the first quarter, and operators feeling as confident in the chain as they’ve been in years.

At Dickey’s, the chain obviously abandoned that healthy menu test. It ensures that its menu is kept simple, and caps its SKUs at 128. “We don’t change much,” he said.

By the way, Dickey’s hasn’t needed to add items to its menu to lure traffic. Dickey said traffic has grown every year at the chain. And, despite concerns about that healthy-eating California population, the chain has been successful there. It’s the largest barbecue chain in that state, Dickey said. Californians love barbecue, too.

And, Dickey said, “Being barbecue is not anti healthy.” He noted that diners can eat healthy at Dickey’s and the chain has a “large fitness following.”

So there was no need to mess with salads. “We’re just going to keep doing what we’re doing,” Dickey said.