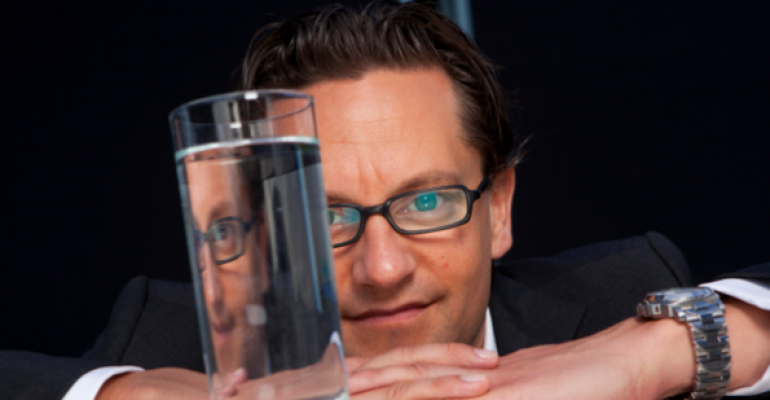 “Water sommelier…?” a colleague asked me as she forwarded an e-mail inviting her to the launch of the new water menu at Ray’s and Stark Bar at the Los Angeles County Museum of Art, which is run by the Patina Restaurant Group.

The two venues have what the invitation said was Los Angeles’ only water sommelier.

Oh yes, water sommeliers are a thing. I’m not saying they’re an important thing or a necessary thing, and they’re certainly not a common thing, but they pop up from time to time.

The first time I heard of a water sommelier was 11 years ago, when the Ritz-Carlton Battery Park City, in New York, coined the term.

I’m not totally convinced that the people at the Ritz were the first ones to coin the term, but they thought they were, as they claimed that their man, Filip Wretman, was the only person in the world with that title.

In the short amount of time I’ve given myself to try to prove them wrong, I have failed, but that still doesn’t mean they’re right.

At any rate, in the years that followed Wretman’s appointment as water sommelier, some bottled water companies picked up on the idea, and I have sat in on at least one water tasting, complete with a discussion of what types of water go best with different types of food.

I don’t remember the details, but there was something about bubbles stimulating the palate.

A 2007 blog entry from the Wall Street Journal by Robin Moroney does quote a story from Time magazine on the subject that explains that denser water, measured in total dissolvable solids, is more like red wine and low-TDS water is more like white wine, and that bubble size and acidity level are other key distinguishing characteristics in water.

Perhaps you think all of this is a joke, but some people take it quite seriously. Doemens, an institution about 20 miles west of Munich, Germany, mostly devoted to beer education, has a water sommelier class. It costs 1,900 Euros — about $2,500.

Maybe you’re thinking “What? What?!” and then, after a pause to reflect and think about whether any of that makes sense, you think again, “What?”

But I think Doemens explains it well:

A principal part of a water sommelier’s job is to actively market water as a quality product by drawing on a profound knowledge of the mineralogical and sensory characteristics of different mineral waters and waters with curative properties.

The primary task of a water sommelier is to impart and promote not only an awareness of quality but also the diversity present among the numerous brands of water on the market, as well as to convey the value and credibility of German and international mineral water …

In other words, being a water sommelier is very much like being any kind of sommelier, or, more broadly, the purveyor of any premium product.

And believe me, water can be premium. Claridge’s in London made news back in 2007 when its new water menu included a 42 centiliter bottle of water from New Zealand for £21. That’s $32 for 14 ounces.

Of course, retailers and restaurants have already done a good job convincing people to pay for water; the International Bottled Water Association says wholesale revenue — I repeat, wholesale revenue — for the U.S. bottled water market was $11.8 billion in 2012, up by 6.7 percent over the previous year.

To get people to spend more than that on water, maybe you need to finesse your pitch a little with discussion of mineral content, healing qualities and bubble size, not to mention how well that high-TDS water will go with your steak. 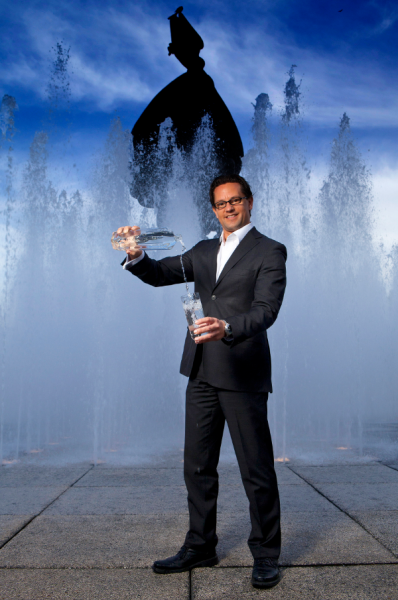 Martin Riese (pictured dramattically at left), the general manager of Ray’s and Stark Bar, who has a water sommelier certificate from the German mineral water association, Verband Deutscher Mineralbrunnen, is doing just that.

Riese, who comes from Germany, is actually the water sommelier for the whole Patina Restaurant Group. He said it even says so on his O-1 visa, which is only granted to people with “Extraordinary Ability or Achievement,” according to U.S. Citizenship and Immigration Services.

Riese, who has been Ray’s and Stark Bar’s GM for the past two years, told me he has been trying to source water for his water list for the past year and a half.

“This was the hardest part for me,” he said, noting that Germans are accustomed to drinking a wide variety of different mineral waters.

Riese said he wishes he could get his hands on some Tasmanian rain water, or a German water that is only bottled under a full moon, which Riese said makes some people think that particular water has more energy.

“For me I’m more interested in the taste,” he said, “but if you already have a [water] list, why not get water for people who care about that?”

Indeed, he said that “small stories” are part of the selling points of water. So his list, which will debut on July 30, is a 20-page book — one page per water — detailing what types of minerals, and how much of them, are in the water, as well as a description of how it tastes and whatever interesting stories there are to tell about where the water comes from, such as a super-cold Danish spring containing such high levels of oxygen that the water appears cloudy when it’s first poured, and then becomes crystal clear 30 seconds later.

Riese is pricing most of the water at $8-$12 for a large bottle (between 750 milliliters and one liter, depending on the brand). The priciest will be a low-production water harvested from Canadian glaciers that he’ll sell for around $24.

July 22: This blog entry has been updated with pictures.