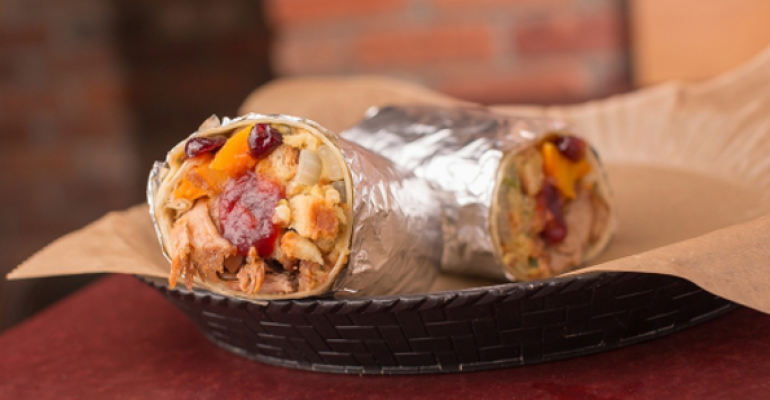 Trust me. You’re not going to see a marked increase in insect consumption in the United States in 2015, no matter how many would-be trend predictors say you will.

You will probably see more creative ways that restaurateurs tell, or make up, the back stories of their food and drinks, as well as the trends that I predicted here.

But one trend I neglected to mention was fusion.

It’s a term that went out of fashion almost as soon as it was uttered in the late 1980s. Florida chef Norman Van Aken claims to have coined the term, and a dozen or so years ago he sent me a 1,600-word treatise on the subject that he said he wrote in late 1988 or early 1989. In it, he described how he was incorporating the flavors and dishes of the Caribbean with European cooking techniques and traditions.

“My interest and my intent is on diving deeply back down in time to salvage the golden treasures and vibrant calypso flavors of old Key West and fusing them with a contemporary sensibility and an individual personality,” he wrote. “The foundation must be the bedrock honesty of Conch, Black, Spanish and Cuban regional cooking.”

And that idea was a cornerstone of the Floribbean cuisine that emerged in South Florida, developed in part by the so-called Mango Gang of chefs, including Van Aken, Allen Susser, Mark Militello and Douglas Rodriguez.

It also was much of what happened in fine dining in the 1990s as American chefs, whose education was almost universally rooted in French tradition, tried to reconcile the innovation of Nouvelle Cuisine with the ingredients and cultures around them.

It also came to mean the combination, often self-consciously, of elements of different cuisines in a single dish, like wasabi mashed potatoes or barbecue chicken pizza.

For some reason, that really pissed people off, especially chefs. “Fusion confusion” became one of the most-repeated things chefs said, and they eschewed the term even faster than molecular gastronomy chefs stopped calling their food molecular gastronomy after Thomas Keller and Ferrán Adrià told them to stop in 2006.

So I kept interviewing chefs who said things like “I don’t like to call it fusion, but I’m combining Asian flavors with European cooking techniques."

Call it whatever you want; it’s fusion. So are Korean tacos, ramen burgers, cronuts and all the “culinary mash-ups” we’ve seen over the past few years, including the Late November Burrito at Boloco, which has all the fixin's of a Thanksgiving dinner, plus rice, wrapped in a tortilla.

And that’s O.K. Guests enjoy adding the whimsy to the traditional, the unusual to the mundane, the pastrami to the ramen.

Just go with it and stop worrying about what to call it.