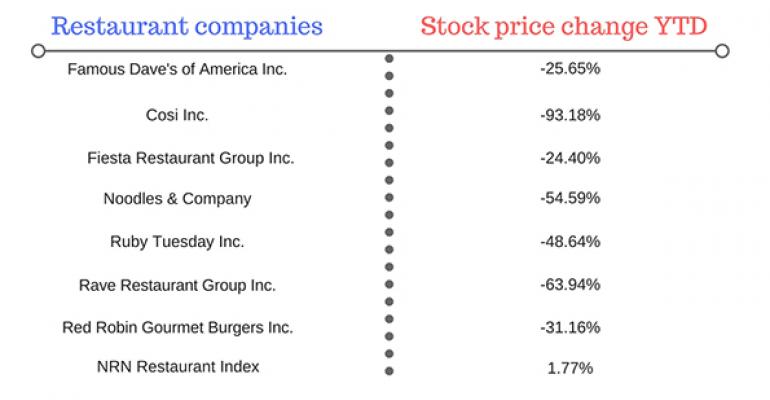 This has been a tough year for restaurant CEOs. When Famous Dave’s of America Inc. announced that it would change CEOs, for the second time in less than 18 months, it became the seventh publicly traded chain to do so since July.

Back in August, as this trend was making itself evident, we noted that sales declines are having an impact, and that as long as this continues more CEOs could retire or be shown the door.

But there is another factor: Stock prices.

The stock performances of chains that have replaced their CEOs in recent months have nothing short of dreadful. On average, these companies’ stock prices have fallen by more than 48 percent year to date.

By contrast, the NRN Restaurant Index is actually up nearly 2 points. 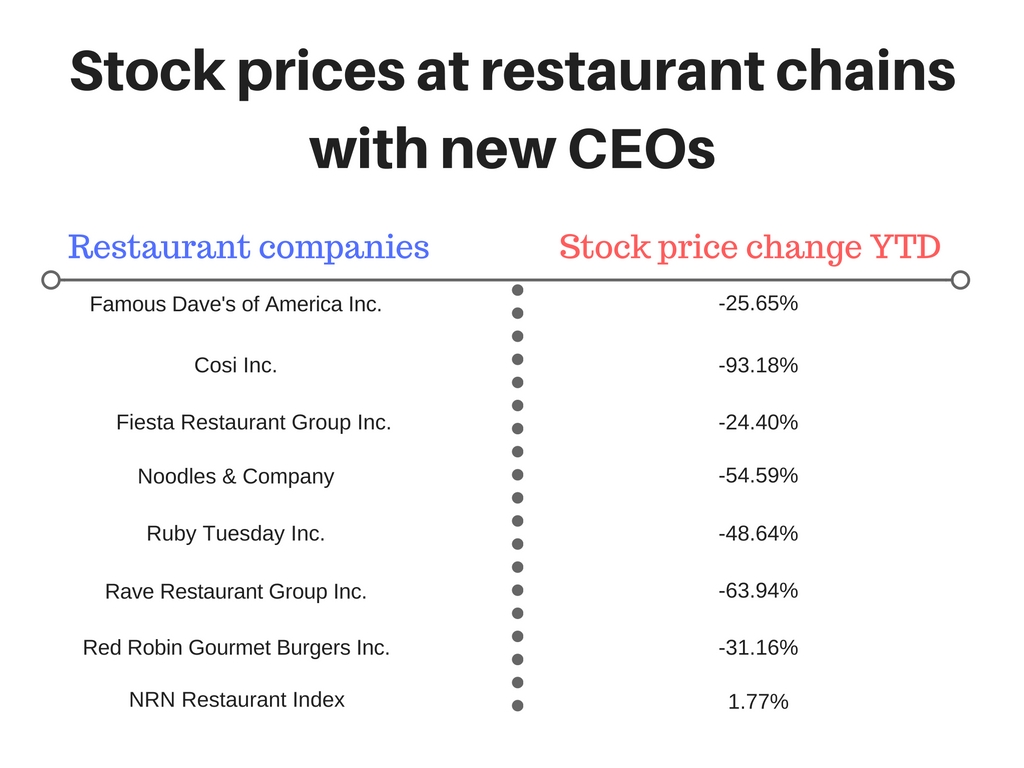 What’s more, the declines predate this year’s stumbles. In each case, the companies’ struggles this year only worsened already weak performance on Wall Street and forced the hands of company boards.

For instance, Famous Dave’s stock is down just more than 25 percent this year. Yet that’s down from an already-depressed price. The stock has lost 85 percent of its value since peaking in February of last year.

Famous Dave’s has struggled to meet financial covenants and might have a sense of urgency to reverse badly falling same-store sales at company locations. So Adam Wright lasted just 10 months on the job before he was replaced by Michael Lister.

Fiesta Restaurant Group, meanwhile, has seen its stock price fall more than 24 percent this year as Tim Taft announced his retirement. Yet that came after stock in the owner of Pollo Tropical fell 50 percent last year.

Cosi Inc. has lost nearly all of its value this year, and it wasn’t strong to begin with. The stock was down 93 percent before the company’s stock was delisted. The chain is currently for sale and is in bankruptcy. Cosi terminated R.J. Dourney this year.

Noodles & Company was one of the hottest restaurant IPOs in history when it went public in 2013. But the company’s stock has steadily fallen ever since and this year plunged to below $5 per share, down nearly 55 percent. Kevin Reddy resigned in July.

Another one is Ruby Tuesday, which has struggled for years. The company’s stock price had been middling for years but plunged this year, down nearly 49 percent as the chain’s same-store sales weakened. The company closed 95 locations and then CEO JJ Buettgen stepped down last month.

Red Robin had been one of the strongest performing casual dining restaurants in 2013 and 2014 but its stock fell 19 percent last year, and then 31 percent this year. Steve Carley announced his retirement in August.

All of this makes sense, because these are publicly traded companies answerable to boards who are answerable to shareholders who want to see increases. Yet dissatisfaction among investors with restaurant chains that don't meet expectations has been particularly acute, and its impacting the c-suite.