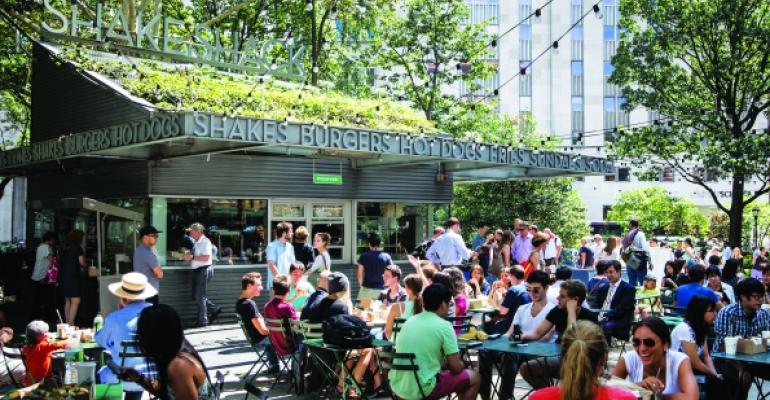 It’s been a good week to be Shake Shack Inc.

The New York burger chain, with just 68 units, has been surging since its IPO in January. But the stock has been on fire over the past week, after a quarterly financial report showed sales up more than 53 percent and operating profit up nearly 80 percent.

Meantime, the company reopened its original, Madison Square Park location in New York City and then ignited speculation about a chicken sandwich with a “Chicken Shack” trademark application.

The result? The stock is up more than 40 percent since May 14. On Friday, the stock closed up at nearly $93 a share, its sixth straight positive trading day. The stock price has more than doubled since trading closed on its January 30 IPO — a day when its stock more than doubled from levels that were already inflated on pre-offering enthusiasm by institutional investors.

It’s difficult to describe now how massive Shake Shack’s valuation is, given the company’s small size.

Consider this: Wendy’s has 95 times as many units. It is 12 times Shake Shack’s size in terms of revenue. Yet, in terms of market cap, they are relative equals. As of now, Shake Shack has a market capitalization of $3.44 billion. Wendy’s: $4.18 billion.

To be sure, investors are betting that Shake Shack will grow to become the size of a big chain some day — though the company itself says it plans to grow only to about 450 locations in the U.S., which will make it something of a destination fast-casual concept, rather than an everyday lunch place.

A lot of factors play a role in Shake Shack’s valuation. The market is friendly to high-growth consumer concepts, especially those in the fast-casual restaurant space. The company is performing above heightened expectations. It’s in New York, where a lot of fund managers live and eat burgers, and it has a highly regarded management team and a revered concept creator, Danny Meyer.

It helps that New York is the media capital of the world, and many of the chain’s fans happen to work at media outlets and do silly things like using its Instagram following as evidence that it will take McDonald’s business.

Still, Shake Shack will have to add a lot of units and a lot of sales to grow into its valuation. It is trading at a forward price-to-earnings multiple of 619.07. By contrast, Chipotle — currently the gold standard among publicly traded restaurant companies — has a forward PE of just over 30.