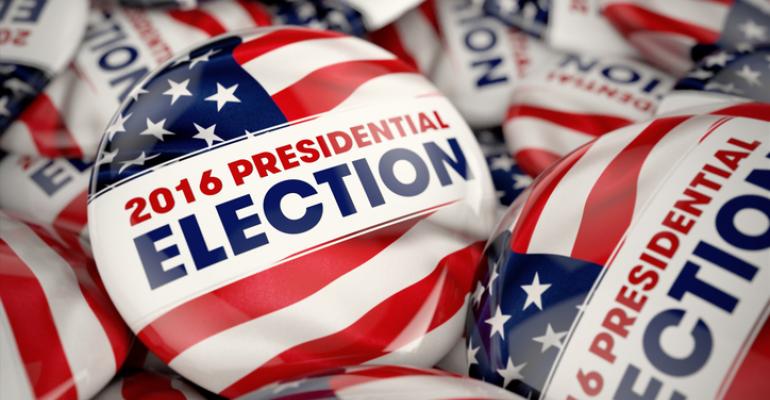 The election is apparently keeping enough consumers at home that it’s having a broad impact on restaurant industry sales.

So says a growing number of restaurant chain executives, who see this year’s steep decline in sales and cite uncertainty surrounding the upcoming election as a big reason.

The latest was Greg Creed, Yum! Brands Inc. CEO, who suggested the election was partly to blame for consumers spending less.

“It goes without saying that people are trying to decide who to choose and what the impact will be on the economy, and I think people are maybe just hunkering down a little bit,” he said during the company’s third-quarter earnings call Thursday.

Earlier this summer, The Wendy’s Co. CEO Todd Penegor also cited the uncertainty. “When a consumer is a little uncertain around their future and really trying to figure out what this election cycle really means to them, they’re not as apt to spend as freely as they might have even just a couple of quarters ago,” he said.

Some executives haven’t necessarily cited the election for weak sales, but also seemed to suggest it could. Steve Hislop, CEO of Chuy’s Holdings Inc., said in August that the company kept sales expectations lower for the year in part because “we don’t really know what’s going to happen 100 percent with the Olympics and all that stuff and the election.”

They’re not alone, either. A search of earnings call transcripts found the election a popular topic of conversation by executives from many industries in the past couple of months. And Bloomberg noted today that many retailers, and restaurants, believe election uncertainty is behind poor sales.

It’s difficult to truly know the motivations of consumers, and why they may or may not be staying home. But the election is as good an excuse as any for why restaurant chain same-store sales have taken a dive this year, despite an economy that is generally humming along. According to MillerPulse, for instance, quick-service same-store sales fell in July and August, the worst performance for that sector in that index since the recession.

To be sure, overall restaurant industry sales — according to federal data —have remained relatively strong this year, suggesting that more sales are going to new units and independents, at the expense of same-restaurant sales and traffic.

Still, this election is clearly different from many others. Both Republican candidate Donald Trump and Democratic candidate Hillary Clinton have poor favorability ratings. And the public is fearful of what might happen if their chosen candidate doesn’t win.

That fear has people preoccupied with the election. More people watched the first Trump-Clinton debate than any other televised presidential debate in history.

Our preoccupation is so bad, in fact, that people aren’t even watching football as much as they did just last year. NFL ratings have fallen dramatically in the first four weeks of the season and some believe the election is to blame.

In other words, people are so fearful and preoccupied with the upcoming election that they are staying home, glued to CNN or Fox News and not eating out.

So what’s a restaurant executive to do? Get to work fast on working with delivery services — and sell more comfort food.

Jonathan Maze, Nation's Restaurant News senior financial editor, does not directly own stock or interest in a restaurant company.