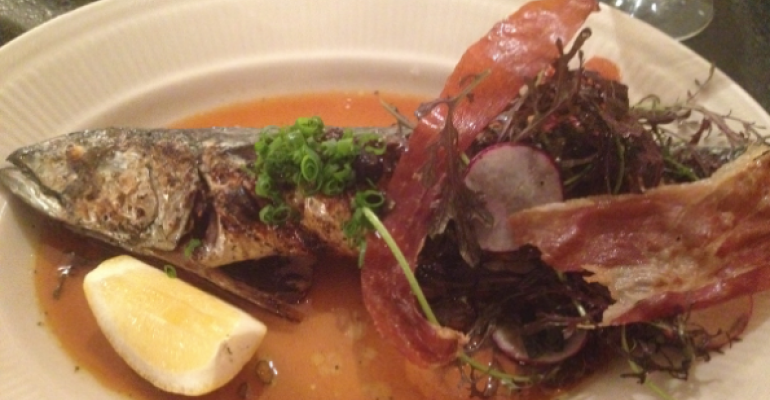 Reflections on the Menus of Change conference

I’ve spent the past five days in the Boston area, getting my fill of omega-3 fatty acids and lean marine protein, and listening to how we can save the world by convincing people to eat differently.

I ate lobster twice — a whole one at the home of an old college friend with whom I stayed over the weekend — and half of the best lobster roll I’ve ever had, which I split with my friend Tamar Haspel at Neptune Oyster in Boston after the conclusion of the Menus of Change conference that we attended in Cambridge.

The Omega-3s came from the bluefish rillettes and mackerel that I had at Kirkland Tap and Trotter, the sardine and assorted other fish that I had at Craigie on Main, and the hamachi ceviche that Tamar and I also split at Neptune Oyster.

You can get the gist of the conference from what I reported on it here and here.

What you might not get is how exhausting this and other confrences intent on tranforming the world are.

It's not just that they’re comprised of hours and hours of presentations and panel discussions; conferences are like that — although most Culinary Institute of America conferences have more cooking demonstrations and fewer PowerPoint presentations. It's the emotional strain of trying to reverse trends that the conference organizers think need reversing.

I first had that experience over a decde ago at the inaugural Public Health Advocacy Institute conference on stemming the tide of obesity in the United States. That conference started with a terrifying series of color-coded maps showing how obesity rates had changed over the past 20 years or so (here's a similar one, if you feel like depressing yourself), starting with Mississippi all alone as the only state with adult obesity rates higher than 20 percent. Then the colors change over the years. New colors are added as rates rise until more than a dozen states are colored the dark red showing obesity rates over 30 percent and only the skinny states of the Rocky Mountains and the Northeast have rates that once made Mississippi the butt of fat jokes.

The people at that conference (also held in Boston), made recommendations that seemed ludicrous, like removing sodas from schools and requiring restaurants to put calorie information on their menus.

Now soda is gone from most elementary and middle schools, calorie information is required in several jurisdictions of chain restaurants with 20 or more locations (and will soon be the law of the land), and obesity rates — well, they’re still high and rising by most accounts, but as Walter Willett, chair of the Harvard School of Public Health's Department of Nutrition, said at the Menus of Change conference, at least the curve is bending, and maybe soon we’ll see a decline.

At Menus of Change presenters called for more modest changes, like a move away from land mammals toward more environmentally gentle proteins, such as legumes, or all that seafood I ate over the weekend, and an increase in vegetables and fruit so they make up half of the food on our plate at each meal.

Foodservice operators know that they can’t tell their customers what to eat, and that if they try their customers will eat somewhere else. But we've already seen a little bit of a shift toward more healthful and environmentally gentle foods as restaurantgoers, at least occasionally, opt for whole grains and fruits and the occasional kale salad, and suppliers are getting better at making those items available.

Hoping for a sudden revolution in how Americans eat is unrealistic, but responding to their growing sense of adventure with dishes that also happen to be better for them and a bit less carbon-intensive is likely good business anyway.