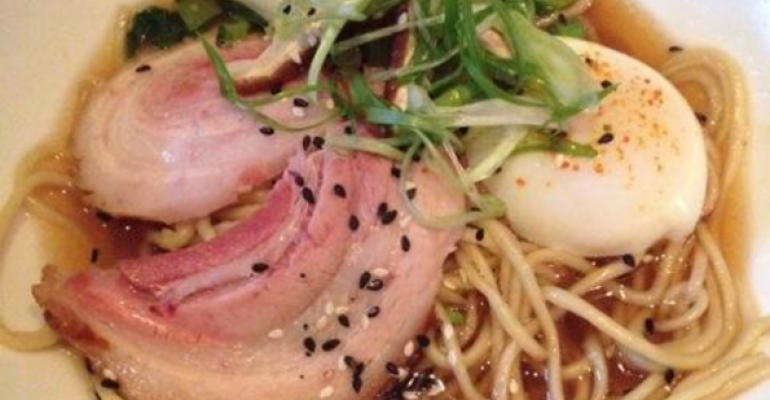 When you think of a destination for eating pork, do islands off the coast of Massachusetts come to mind? Not so much?

Not for me, either. Still, I didn't flinch when the people at the National Pork Board told me they were taking me to Nantucket — that favorite vacation spot of wealthy yankee WASPs — for their fifth Pork Crawl.

The Pork Board knows what it’s doing when it comes to finding delicious pork, and Stephen Gerike, the commodity board's director of foodservice marketing, led a team that roamed the cobblestone streets of this island, apparently sampling every bit of pork they could find, because when they were done narrowing down our choices, they still had 10 restaurants for us to try.

We started off slow, with a ride in a small boat — possibly a skiff, but I don't really know because I come from a landlock, mountainous region — to a luxurious Inn called the Wauwinet, where we stood by the water, on the Zen Deck, to be precise, sipped sparkling wine and ate hors d'oeuvre before watching a dual demonstration of clam chowder preparation by Kyle Zachary, chef of Topper's, the fine dining restaurant at the Wauwinet named after a former owner’s dog, and Stephen Gerike.

Stephen made a traditional Rhode Island-style clam chowder. Unlike "New England" clam chowder (Rhode Island's part of New England, which is why the quotation marks are there), which is finished with cream, or Manhattan clam chowder, which has tomatoes. Gerike basically said that the Rhode Island version is the Ur clam chowder — the precursor to the embellished versions that would follow — made with salt pork (which of course was why he was demonstrating it) and clams.

Zachary, being a fine dining chef, made a fancy version, with potatoes that he confited in lard, along with leeks and, for garnish, little pig trotter croquettes.

That was the first course in our meal at Topper's that evening, and was followed by a (pork-free, as far as I could tell) salad of autumn vegetables and fruits with pecan and goat cheese.

So that was nice — a leisurely four-course meal and some wine.

Then all hell broke loose the next day. In a good way.

We had the morning to relax and gird our loins, and then went on a nine-course eating marathon. 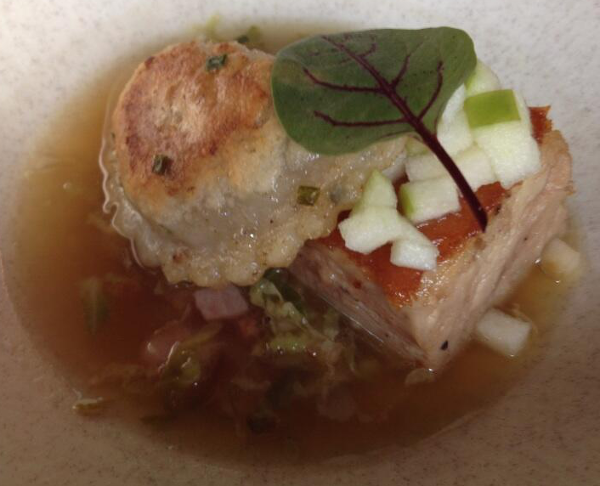 We started at American Seasons, Where chef-owner Michael LaScola started us off with chicharones and and pig-ear fries. I’d show you a picture of the latter, but I ate them before I got a chance: They were pig ears that were braised, cut into strips and fried until crispy, so I couldn't help myself. Instead, pictured above, is Michael's Berkshire pork belly confit with boudin noir pierogi in a smoked ham hock broth.

It didn’t suck either.

Michael accompanied us on our crawl, because it’s always good to have a local give you the rundown of where you are. 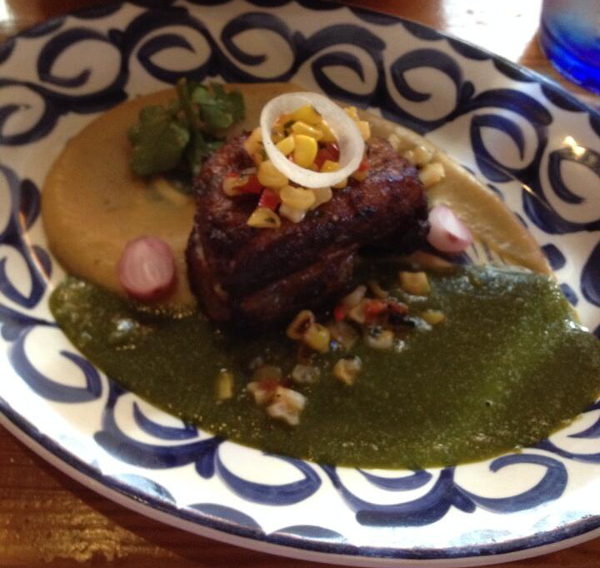 Our next stop was Corazón del Mar, one of three restaurants by husband-and-wife team Seth and Angela Raynor.

Corazón del Mar is a Latin-themed restaurant, for which Seth and Angela are growing their own Peruvian aji rocoto and other chiles, along with other produce that’s hard to get on Nantucket.

Pictured above is Seth’s cured, braised and fried pork belly carnitas with plantain-coconut purée and what they call “crack sauce” — a sort of hyped-up, chile-spiked chimichurri with more vinegar.

Next stop: Cru, an airy place with a view of what I guess is a marina — boats were docked there, at any rate, and chef-partner Erin Ziercher dished up these sliders of pulled pork and fried oysters with paprika aïoli and zucchini pickles.

So at this point I was full. Actually, I could have filled up on Michael's pig ears, but that wasn’t an option, as we still had six more places to visit. 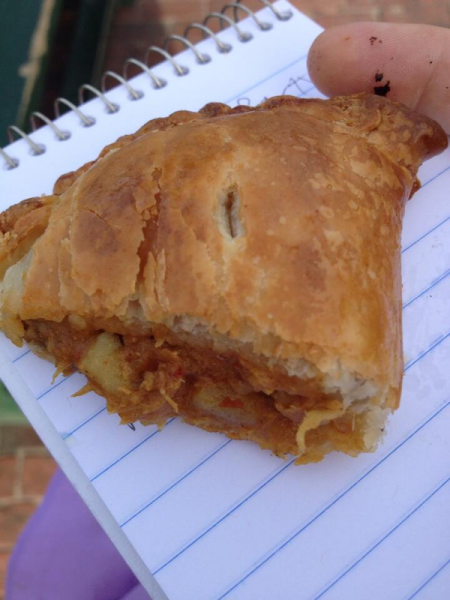 Next on the list was The Nantucket Pasty Company, which opened in the summer of 2012. On the right you can see half of a pork vindaloo pasty balanced on my notebook. Nantucky Pasty’s a takeout joint, so we picked up our treats and ate them across the street. They were served with an Indian yogurt sauce called raita, which was a good thing, because they were super-spicy (no, really).

Did I mention that most of these dishes were paired with an alcoholic beverage? Well they were. Not at Nantucket Pasty, obviously, but definitely at our next stop, Òran Mór, which is Gaelic (Scottish, I think) for “Beautiful Song.”

There we drank an apple-infusedversion of a Manhattan while eating our fifth little meal by chef Chris Freeman: pan-fried, panko-crusted pork belly scrapple, served on an English muffin in which the water was replaced with apple cider.

It was topped with a little pullet egg, and a picture of it can be seen below, garnished with diced apple. 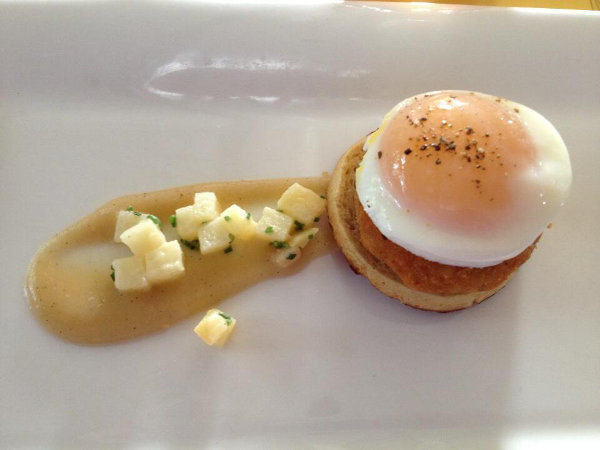 We took a break from drinking at Black-Eyed Susan’s — a diner by day, culinary BYO hot-spot by night. 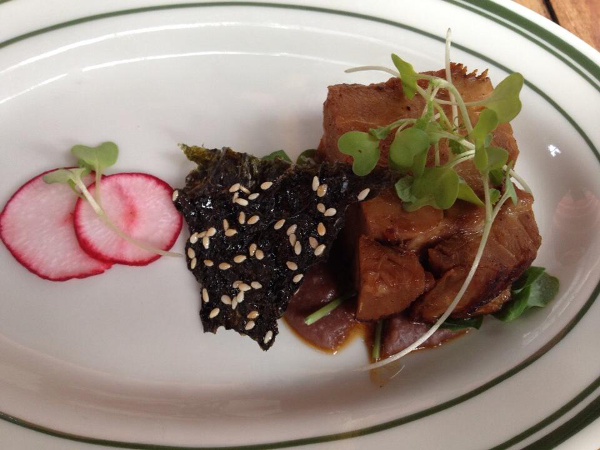 From there it was off to the Boarding House, the second of the Raynor’s three restaurants that we were visiting.

After Angela gave us a tour of the restaurant, including pictures of Seth’s ancestors who lived on Nantucket, we sat on the patio and tucked into some crispy pork belly with creamy potato salad, pickle mustard and watercress coulis. 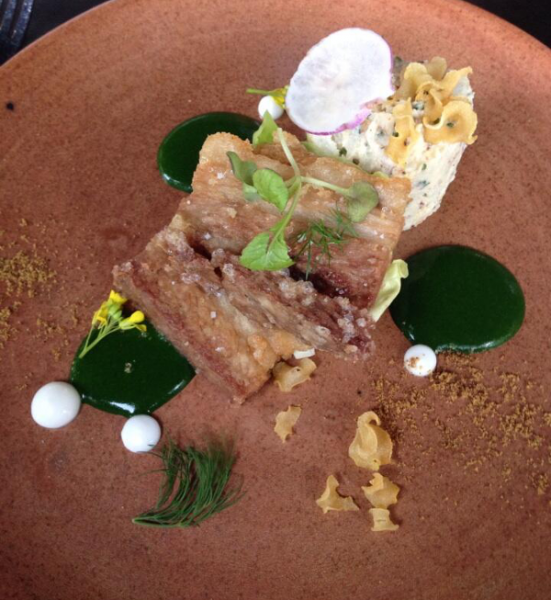 Next we went upstairs to The Pearl, which is also owned by the Raynor’s. It's a very popular high-end Pan-Asian place. We had ramen, made with an alkaline dough that made the noodles agreeably chewy. It was served with Berkshere pork belly and shiitake mushrooms in a soy-pork broth and garnished with black sesame seeds.

I should have been too full to eat it, but I was not. 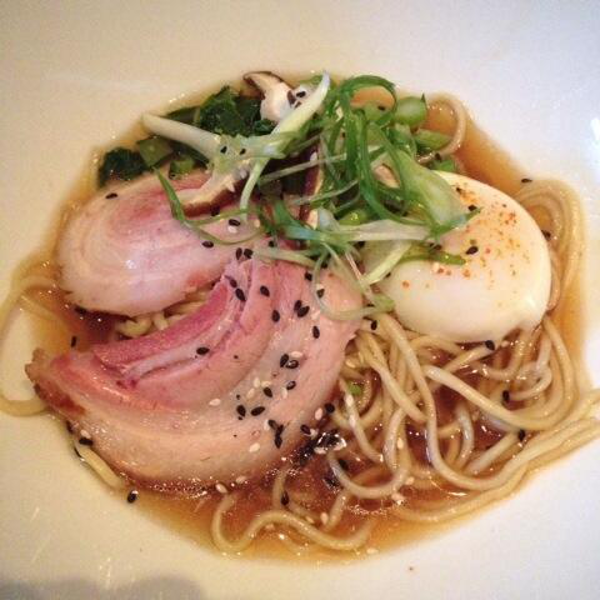 Finally we went to Michael LaScola’s new place, the Proprietors Bar & Table. Heading up the kitchen is Tom Berry, who moved to Nantucket from the Boston area, where he’d been kicking around for years. He’s no stranger to Nantucket, though: I wrote about him making bluefish cakes at the Nantucket Wine Festival in 2008.

He fed us Berkshire pork and gochujang on a kimchi biscuit, as well as some kung pao pig tail.

I’m slightly embarrassed to say that I finished both of them, but hey, I’m a professional. I was just doing my job.