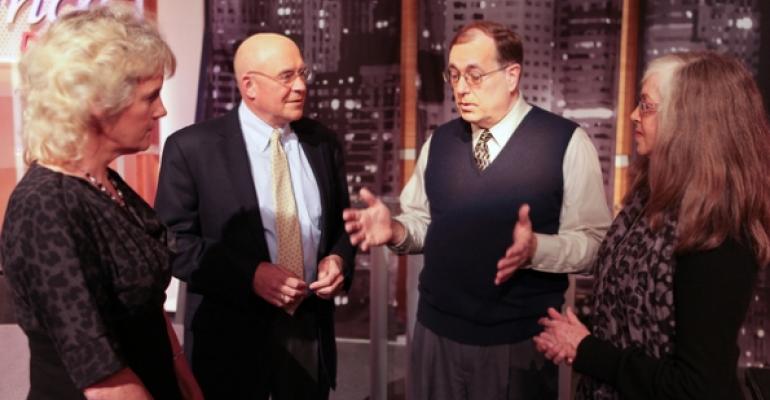 I often think that Americans have forgotten how to have polite conversations with people they don't agree with.  With such a wide variety of media choices available, we could hear plenty of different viewpoints, but mostly we don't. We read publications and watch television shows that align with our own way of thinking. We stop following friends on Facebook with whom we have different political views.

It seems that these days, possibly taking cues from our government leaders, many people don't feel like arguing about issues on which they disagree, let alone trying to find common ground. They just want to disagree.

And then there are GMOs. Genetically modified organisms have now been on the market for about 20 years, mostly in the form of herbicide resistant and/or pesticide resistant corn, soybeans, sugar beets and cotton. In brief, they’re plants with DNA that has been altered in laboratories with genes from other species to alter those plants’ characteristics. Proponents argue that they have the potential to increase yield, make farmers’ lives easier, and produce crops that are resistant to drought, more nutritious, better tasting, longer lasting and having other qualities that it would be difficult or impossible to impart through normal breeding. They also say that extensive scientific studies have shown that they’re safe.

Opponents say they’re potentially bad for our health and the environment and we don’t even need them anyway.

GMOs were discussed at the Intelligence2 debate last night. The Oxford-style debates, which were started in New York in 2006 and are aired on National Public Radio, are intended as cordial debates in which both sides present their arguments and then actually discuss them, with the help of moderator John Donvan.

I won't go into a play-by-play of the conversation. You can watch the whole thing if you want to here.

On the pro-GMO side were Robert Fraley, executive vice president and chief technology officer for Monsanto, the agribusiness company that owns the patents on many GMO seeds, and Alison Van Eenennaam, who's a genomics and biotechnology researcher for the University of California at Davis.

Arguing against GMOs were Charles Benbrook, a research professor at the Center for Sustaining Agriculture and Natural Resources, and Margaret Mellon, a science policy consultant and former senior scientist at the Union of Concerned Scientists.

For the record, I'm pro-GMO. I don't think they're universally awesome and I think some of the ways they're used could stand a lot more discussion, but I'm convinced by the body of evidence showing that, in and of themselves, they're no more potentially harmful than any other plants.

That's basically what Fraley and Van Eenennaam said. Fraley argued that the scientific community's consensus on GMO's safety was as thorough as the conscensus on global warming — a clever tactic, since it just so happens that many people in the United States who are opposed to GMOs are also advocates of curbing greenhouse gas emission to help stem the tide of global warming. It makes no sense to me that those philosphies should align any more than I understand why people who advocate for lower taxes on the rich also tend to want restrictions on abortion. They seem like totally different discussions, but that’s where political discourse is in this country.

Van Eenennaam also took a good approach: One of her first comments to say that genetic modification technology often is conflated with its use by Big Ag (e.g. Monsanto), but that in fact the technology has many uses and even if you disagree with one such application doesn't mean you need to avoid GMOs altogether.

Benbrook and Mellon disputed the universal acceptance of the science a bit, and pointed to environmental concerns, specifically about Monsanto's Roundup Ready products, which they argued have accelerated the development of plants that are resistant to Roundup, an herbicide, produced by Monsanto, that can be sprayed on and around Roundup Ready plants without harming them.

Besides, Mellon argued, we can take care of the growing needs and shrinking resources of an expanding population in the face of global climate change through traditional breeding, which has been very effective.

Some members of the audience were kind of contentious: Donvan had to shush some people who were hissing during the introduction of some of the panelists, and a woman near me kept shaking her head pretty much any time Fraley or Van Eenennaam were speaking (to be fair, that was more annoying than contentious), but pretty much people listened politely.

There was clearly a winning side, though. Attendees of the debates are asked to vote on a side at the beginning of the debates and again once they're over. At the beginning, 32 percent of attendees were pro-GMO and 30 were opposed (38 were undecided). By the end 60 percent were pro GMO and 31 were opposed. One of the events' publicists said it was the largest movement in opinion he'd ever seen in one of these debates.

I just found it refreshing that people had polite conversation.

This blog entry has been revised as follows:

Update: Dec. 5, 2014  This story has been edited with more precise analogies of cultural gridlock.