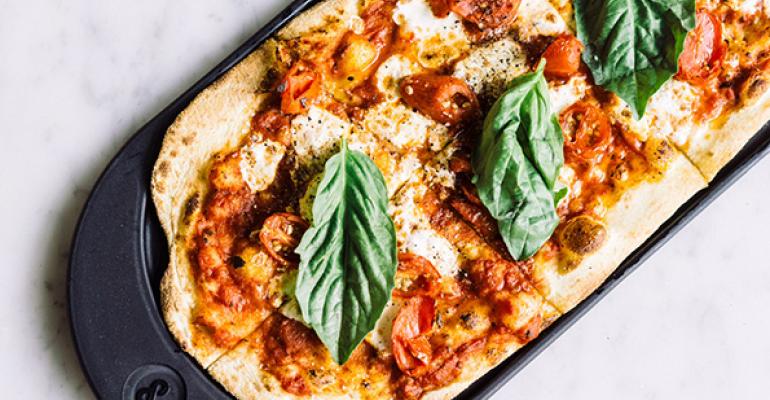 At &pizza, higher pay and tattoos

But that is indeed what’s happened with &pizza, the fast growing, Washington DC-based pizza chain — where a company tattoo is a unique benefit. About 50 workers have the company’s ampersand logo somewhere on their person.

“It really started about four years ago, when I was working in the first pizza shop,” CEO Michael Lastoria said. “We just developed a strong bond and love and affinity for the brand.

“One of the guys came up to us and said, ‘I want this brand tattooed on me.’ He gave me a heartfelt, touching story about what this meant to him. We decided it was something we should promote.”

It’s not just tattoos, however. The chain is rapidly expanding, with expectations to grow from 15 locations now to 21 by the end of the year. It wants to hire from within, but to do that it needs a culture that values employees and encourages them to stay and move into management positions.

While much of that is on unusual benefits — Lastoria also noted that workers want “swag” when they do well, such as &pizza apparel — it also requires higher pay.

“I would say a great deal of &pizza’s success could be directly attributed to our tribe members — our employees,” he said, noting that the company calls its workforce a “tribe.” “By feeling appreciated, engaged, supported and valued, they really go the extra mile when it comes to guest service and guest intimacy. It would make sense that we would do everything in our power to incentive workers and pay above what the federal and state mandated minimum wage would be.”

Higher labor costs have become a primary issue in the restaurant business. Rising minimum wages, new overtime pay rules and old-fashioned competition for workers are all leading to higher labor costs. Some companies are raising prices in response, and there is some evidence this might be hurting traffic.

Several chains, however, have worked to get ahead of this curve by increasing pay before that higher pay is mandated. Shake Shack has made a point of doing this, defending itself with investors in the process. President Obama used Minneapolis-based Punch Pizza as an example to highlight the benefits of raising the minimum wage.

Many chains view it as a vital part of an overall culture aimed at attracting and retaining strong talent.

“Culture is both internal and external,” Lastoria said. “Paying people a little bit more, taking care of the tribe and doing right by people is part of the culture we’re trying to create. It’s in line with why we exist.”

Lastoria said that the view might hurt profits. “We’re willing to make less money if need be,” he said.

Still, it’s not as simple as raising wages. Lastoria said &pizza has had to spend heavily on human resources to recruit and train the right workers.

“Our turnover wasn’t always sub-100 percent,” he said. “We have to know the right profile of a tribe member who is going to be the best fit in terms of making sure we’re hiring people that will have success in the company. It’s taken the better part of four years to figure that out.”

All of this — the company’s hiring, recruitment, development and pay — is designed to help the chain grow.

It wants quality workers to fuel its expansion without relying on outside workers who might not quite get the company culture. By encouraging workers to go full time and then into management, it can provide managers to newly built locations.

“We’re a brand built with purpose, not necessarily with profit in mind,” Lastoria said. “My definition of success is the feeling you get in the restaurants. Is the music right, is the style right, is the food being prepared right. People are a huge part of that. And you can’t have a great experience with people who aren’t engaged and in love with the work they’re doing.”

Even if that engagement goes as far as an &pizza tattoo.