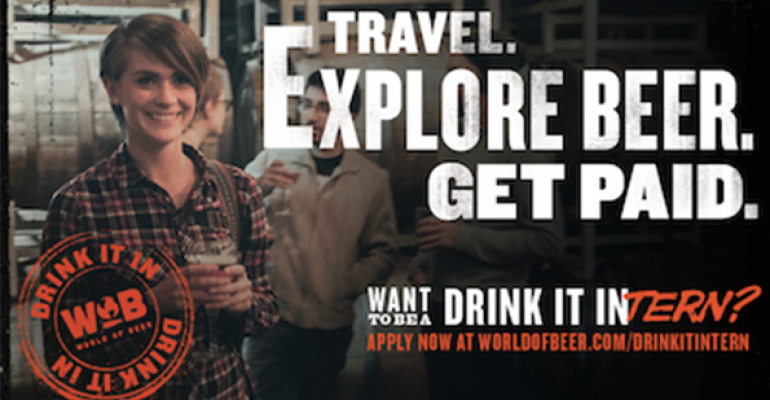 As internships go, World of Beer taps a top-notch offer

World of Beer Inc. is offering three beer fans what indeed just might live up to what it boasts is “The Internship of a Lifetime.”

The Tampa, Fla.-based company, which has 70 beer boutique-restaurants in 20 states, is taking applications through March 26 for its first internship program, which seeks three social-media-savvy beer aficionados to chronicle the art and romance of beer from tun to tavern.

“There are people out there who really understand the gravity of beer — how it can pull us back to familiar friends and good times, or push us toward new and exciting adventures,” said Paul Avery, World of Beer’s president and CEO, in a statement.

Using the brand's slogan as a springboard, World of Beer is calling the three “Drink It In-terns.” A spokeswoman said they will be paid and reimbursed for expenses, but they will not be considered full-time employees.

The company said it was looking for photographers, writers and social-media mavens to produce stories, photos and other postings that highlight “stories untold in the craft-beer community” for the brand’s social channels, including Facebook, Instagram and Twitter.

“Our Drink It Interns will be WOB’s narrators, capturing content from around the country and the world and sharing it back via our social-media channels, bringing consumers into the world of brew traveling,” the company said. “This job is all about traveling, shooting, editing, writing and drinking awesome beer. (Cheers to that!)”

World of Beer noted that “the skills and relationships fostered throughout the internship will cultivate and translate into any career, allowing interns the opportunity to build their portfolio.” And the company, for its part, gets “first-person perspectives to share unique and previously untold stories.” The brand maintains a database of more than 28,000 beers, so the story potential is vast.

World of Beer is smart in getting the biggest fans of its primary product to convey stories about what they are interested in most. Fans speaking to fans is the ultimate word-of-mouth messaging.

Candidates can apply for the internship by sharing a one-minute video about their interest for the position or audition at in-tavern interviews at select World of Beer locations in Arizona, Florida, Illinois, Ohio, Texas and Virginia.

The one immutable criterion for being considered for the internship: candidates must be 21 or older. So given my advanced years, that means I’m sadly overqualified chronologically.