Here’s how much sales slowed in spring

Recent earnings reports from publicly traded restaurant chains have confirmed what we’ve been saying for months now: Industry sales are slowing down.

How much? Nearly 2 percentage points.

The median slowdown from the first to second quarters among companies that have reported thus far was 1.7 percentage points, according to Nation’s Restaurant News research.

The slowdown is almost industrywide. Almost every sector saw an average pullback in same-store sales from the first quarter.

The lone exception? Pizza chains, where Domino’s Pizza — the top-performing restaurant chain in the most recent quarter, at 9.7-percent same-store sales growth — along with Papa John’s, both saw substantial sequential increases, offsetting weakness at Pizza Hut and Papa Murphy’s. 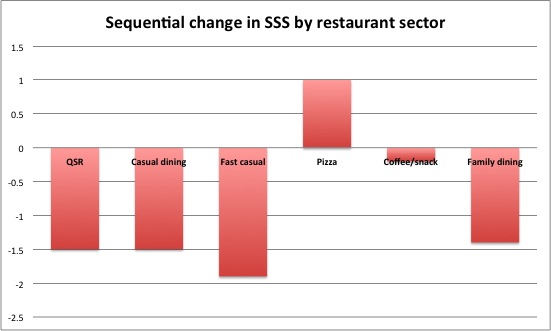 This analysis is looking at the sequential change in same-store sales. So, a concept could theoretically have a good quarter and still report a slowdown in sales at existing locations.

Chains like Sonic Corp. (4.5-percent slowdown) and Shake Shack Inc. (down 5.4 percent) are certainly in that boat.

At the same time, a chain could have a “less bad” quarter. It’s still bad, but shows up as a positive. Chili’s fiscal fourth-quarter same-store sales decline of 1.8 percent thrilled investors last week, for instance, because it was a considerable improvement over the 4.5-percent decline the chain reported in the previous quarter.

Maybe the best example of that, however, came from Chipotle, whose 23.6-percent decline in same-store sales in the second quarter was a 610-basis-point improvement over the first quarter — all due to the chain’s food safety issues from 2015.

So it’s important to take such movement with a grain of salt. Same-store sales are flawed, in general. It’s difficult for chains with strong sales to maintain those numbers for long, and concepts with particularly weak sales, like Chipotle, are bound to show some improvement.

Still, the broad-based weakness further demonstrates the issues currently facing the restaurant industry. Over-expansion, heavy competition from other sectors offering prepared food, lower grocery prices, or simply consumers shifting their habits all seem to be draining traffic from the business. Whether it’s a longer-term slowdown or a one-time blip remains to be seen.

The biggest slowdown in the second quarter, by the way, came from fast-casual chains, which averaged a 1.9-percent slowdown. All but two fast-casual chains saw same-store sales slow in their most recent quarter, and that’s before Zoe’s Kitchen Inc. reports its earnings. And that’s also with Chipotle, the traditional sector leader, improving on its awful first-quarter report with less awful results.

Both quick-service chains and casual-dining chains averaged same-store sales slowdowns of 1.5 percent from the previous quarter.

Those results demonstrate that the current issue is broad-based, rather than related to sector-specific issues, such as tips at casual-dining concepts or consumers shifting away from traditional quick-service restaurants.

Whatever the reason, consumers are simply eating out less.