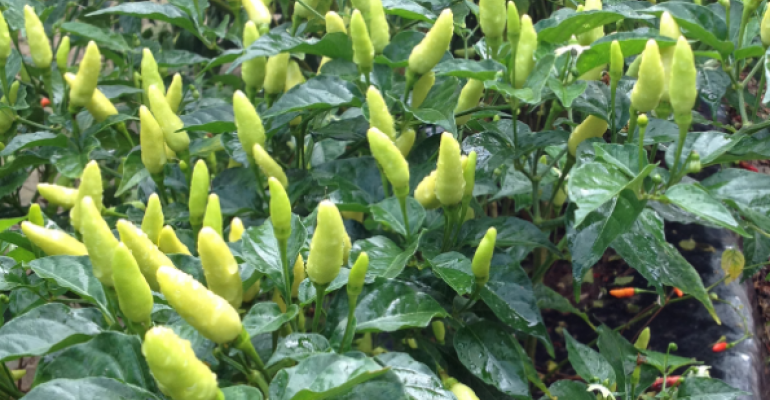 Could the next Sriracha sauce be Tabasco?

Pictured here is a Tabasco pepper, the fruit of which is the foundation of the McIlhenny family’s fortune.

O.K., it’s one of the foundations of the McIlhenny family’s fortune. They also own a salt mine and an oil well and various other interests on picturesque Avery Island in southwestern Louisiana, where I have spent the past couple of days and which the McIlhennys own in conjunction with the rest of the Avery clan — it’s complicated; they have a family archivist and historian who explained some of it to me, but a guy can only learn so much.

The Tabasco pepper was named by Tabasco Red Pepper Sauce inventor Edmund McIlhenny in 1868, possibly after the Mexican state of that name, but no on really knows. It’s harvested when it’s bright red; the harvesters compare the peppers to a red stick painted the desired color. It’s the key ingredient in the only sauce the McIlhenny Company made until 1994, when it introduced its Green Jalapeño Pepper Sauce.

Since then McIlhenny has expanded its offerings to 12 sauces sold in 180 countries, along with assorted co-branded and custom-made stuff, from Tabasco-spiked sausages to Tabasco-infused crackers, along with mayonnaise and olives and other things licensed to other manufacturers. Part of that was in response to changing consumer habits: McIlhenny CEO Tony Simmons (he’s in the McIlhenny family, but a descendent of the women, hence the different surname) explained that, instead of having one bottle of hot sauce, families now have multiple bottles for different occasions or purposes. McIlhenny company executives wondered: Why not have all of those sauce be Tabasco sauces? So the green jalapeño sauce was followed by sweet chile, chipotle, chile-and-garlic, habanero and other varieties, although the original sauce still accounts for 72 percent of the total sales mix.

Despite the recent additions to their portfolio, the McIlHennys can hardly be accused of being trend followers. They’ve gone their own way and benefited from that.

But they have seen the freight train that is Sriracha sauce and they’re considering jumping on it.

Like Tabasco, Sriracha is named after a place — a district in the Thai province of Chonburi, on the gulf of Thailand. Also like Tabasco, chefs enjoy cooking with Sriracha — cooks, being the bawdy people that they are, often refer to Sriracha as “cock sauce,” because of the rooster that graces the label of the brand that popularized the sauce in the United States.

Unlike Tabasco, Sriracha sauce’s popularity is fairly new in the United States. Nonetheless, it has caught on quickly and is now a well-entrenched condiment, appearing on hamburgers, with noodles and even on Subway sandwiches.

Simmons said he’s thinking of rolling out a Tabasco version of the Sriracha — and not in a blue sky, distant future kind of way. His employees have developed a Sriracha sauce from ripe pickled jalapeños, and it’s already available at McIlheny’s Avery Island gift shop and online. Starting in November, Tabasco’s going to begin retail tests of its Sriracha sauce in supermarkets. If it’s successful, they’ll roll it out next year.

In Thailand, Sriracha sauce is considered a fairly mild condiment, enjoyed with seafood and on eggs. I'm not sure what chile is used to make it there, but Thailand has two main hot peppers — a small, thin, extremely spicy one called prik kee nu, or rat-dropping chile (it's usually called Thai bird chile in the United States), and a larger, milder one that kind of resembles serrano peppers and that I would bet is the one used for Sriracha sauce. It’s called prik chee fah, or chile that points to the sky, because, like the Tabasco pepper, it points upward.