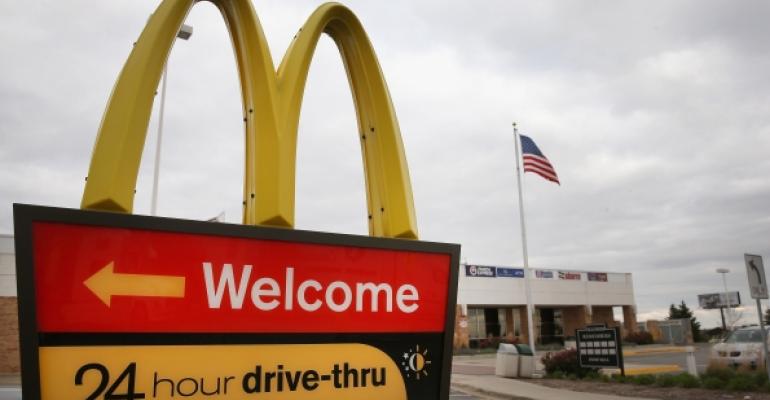 Earlier this week, McDonald’s Corp. told franchisees in a conference call that it plans to pare down the items listed on its drive-thru menu, to only the items that are the most popular, according to the Wall Street Journal.

The menu would be called “Drive-Thru Express,” multiple sources familiar with the issue told Nation’s Restaurant News, and it would display the most popular 80 percent of products sold through the drive-thru in specific markets.

In theory, a smaller drive-thru menu would simplify ordering and improve speed of service in the drive-thru. That’s important, because that’s where two-thirds of McDonald’s customers get their Big Macs and their Egg McMuffins. And speed there is vital, given that those customers are in such a hurry they can’t even get out of their cars.

Yet it sounds like this new drive-thru menu is a menu cut without the actual menu cut.

McDonald’s is working hard to strike a delicate balance as it seeks to lift the company out from under the biggest sales slump in its history. It acknowledges the need to simplify operations, and trimmed a few items from its menu this year. Critics, including many franchisees, have long said that a decade of menu additions has left the Oak Brook, Ill.-based giant with a bloated menu that’s difficult to operate.

Such difficulties hurt the company’s trademark speed, a key element for a chain built on the convenience of its locations.

But McDonald’s also has to innovate at a time of intense competition. And so the company is testing all sorts of ideas. It’s giving restaurants in different regions of the country the ability to sell unique menu items. It’s testing a customization platform called Create Your Taste, and a cheaper, easier version called Taste Crafted. It’s also testing all-day breakfast.

And, indeed, according to the Wall Street Journal the company’s plans also include a larger mid-priced menu of items from $1.50 to $3.

Adding to the menu while simplifying operations is contradictory. But, earlier this month, CEO Steve Easterbrook suggested that technology could help improve service even without a pared-down menu. “We can use technology to do some of the heavy lifting, offering two or three service options that puts choice in the hands of consumers.” He suggested mobile ordering, check-ins, self-order kiosks and other technology could improve service while still enabling customers to have choice.

Ultimately, however, we wonder whether this move could give McDonald’s the ammunition with which to make future menu cuts — potentially leading to the simplification many operators demand.

By changing the drive-thru menu boards so customers see only the most popular items, the company will be able to see how a smaller menu might work. Its POS system would record how many items off the menu board get ordered. The company could then use that data to eliminate those items that prove unpopular.

And, if sales in the drive-thru flourish even with the smaller menu, then the company would know that a slimmer menu is the way to go. Of course, if sales fall, then menu cuts aren’t such a good idea.