Burger King is apparently selling a lot of hot dogs

Burger King unleashed grilled hot dogs on the world last month and the response, at least in the eye of one franchisee, has been “overwhelming.”

Carrols Restaurant Group, Burger King’s largest operator, said toward the end of its fourth quarter earnings call on Thursday that it is selling a lot of the grilled hot dogs.

“There has been an overwhelming response,” CEO Dan Accordino said on the call. “The advertising for the grilled hot dogs didn’t even start until [Thursday]. So all you have seen so far is what you have seen on social media.”

How many are they selling?

“We are selling between 80 and 120 grilled hot dogs per store per day,” he said, “with no advertising.”

What’s more, he noted, the hot dogs are “incremental,” meaning consumers order them with other items, driving up the chain’s average check.

The results demonstrate the power of social media and Burger King’s ability to use it effectively to drive sales — which is, perhaps, its biggest advantage over its competitors. 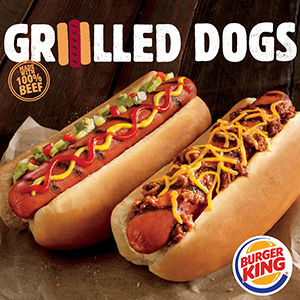 “They sure know how to get attention,” one operator told me once, after the chain successfully launched its low fat French fries, “Satisfries.” Of course, early attention doesn’t mean long-term success, as those fries were ultimately discontinued. But, as long as consumers like the hot dogs and they generate incremental sales, there’s no reason they can’t take a place on the chain’s permanent menu.

The dogs are grilled and come in two varieties, a classic dog with chopped onions, relish, ketchup and mustard, and a chili cheese dog with chili and shredded cheddar.

Burger King’s grilled dogs have ignited a “dog fight,” in the words of my colleague Ron Ruggless, as various dog-selling chains along with the convenience store 7-Eleven all make a push to ensure their customers don’t migrate.

Those reviews, by the way, pretty much run the gamut from loathed to loved.

At the bottom, there is the New York Post, where Steve Cuozzo called the hot dogs “a disgusting disgrace.”

“Burger King’s new hot dog is a Whopper of a marketing disaster — and a culinary calamity, too,” he wrote.

On the other end of the spectrum is Deadspin, where Will Gordon called the hot dogs “a tasteful middle finger to uppity fast food.” He also takes a few paragraphs in that review to knock Chipotle Mexican Grill down a few notches.

Both reviews, by the way, are worth reading.