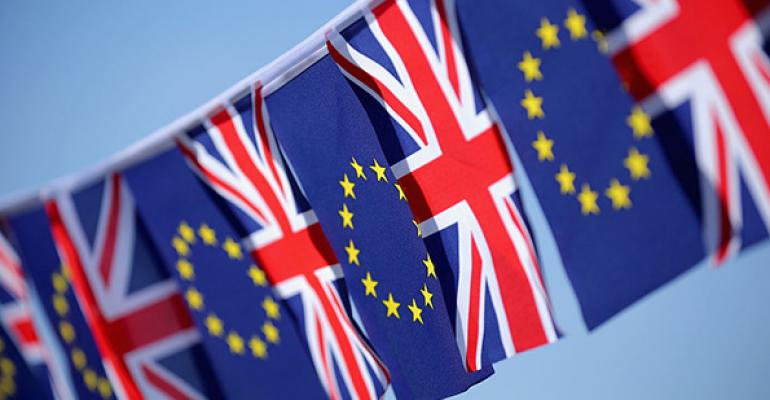 Brexit could hit McDonald's and other chains

Voters in the United Kingdom surprisingly voted to leave the European Union on Thursday.

Investors reacted to the news by selling. The Dow Jones Industrial Average fell more than 500 points as of 2 p.m. Friday, or about 3 percent. The broader S&P 500 index also fell 3 percent.

The restaurant industry didn’t fall quite that far. The NRN Restaurant Index was down just less than 2 percent through early afternoon.

Indeed, while the vast majority of restaurant stocks were down Friday, many were not down nearly as much as the broader markets.

That includes companies with real exposure to Europe. McDonald’s Corp., the world’s largest restaurant chain that gets much of its profits out of that part of the world, was down just about 1 percent on Friday. But Yum! Brands Inc., another international-heavy restaurant company, was down 4 percent. Starbucks Corp. was down just 2 percent. Restaurant Brands International Inc., the operator of Burger King and Tim Hortons, was down more than 3 percent.

But a few restaurant companies were actually up.

Economists are not entirely certain what could happen as the result of what is being called Brexit, but the vote has resulted in considerable hand-wringing on both sides of the Atlantic.

Restaurant chains have more aggressively added locations in foreign markets in recent years. But some of the biggest and most well-known names have sizable exposure over there — making the vote a real concern.

That starts with McDonald’s. Bernstein Research analyst Sara Senatore said in a note today that 7 percent of McDonald’s systemwide sales come from the United Kingdom, and 28 percent comes from Europe.

Brexit could impact these brands and others in two ways. First, currency exchange rates could hurt international profits. The value of the British pound plunged to historic lows after the vote.

Currency exchange impacts corporate profits at companies that do a lot of business in foreign markets. A lower value for the pound will reduce the profits made in that country.

In addition, a recession in the United Kingdom, Europe or both could hurt their sales in those countries.

“The UK vote to exit the EU will likely have an impact on both the operating performance and currency translation,” Senatore wrote.

That said, many of these brands operate low-priced restaurants that tend to appeal to consumers who want cheap eats. McDonald’s same-store sales didn’t struggle nearly as much as its more costly competitors during the recession, thanks largely to its low price point.

And, as Brian Sozzi from The Street pointed out, McDonald’s has been thriving in the U.K. lately, and could continue to do so despite Brexit, whatever the ultimate impact on the European economy.