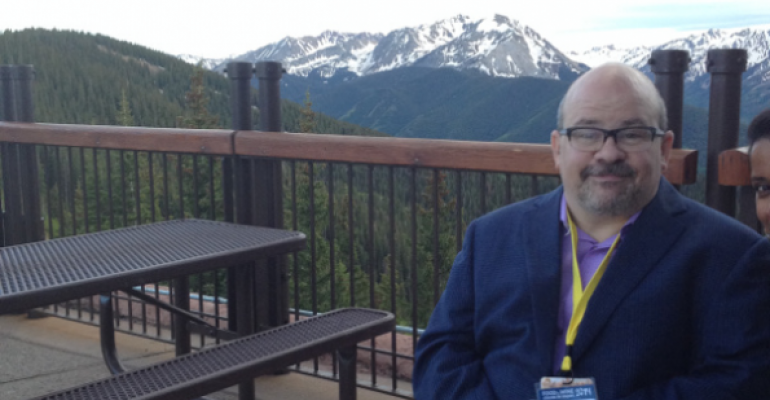 Many regular attendees of the Food & Wine Classic in Aspen love the event to an extent that borders on fanaticism.

“Isn’t this amazing?” they ask me as they stand in the crisp, sun-drenched air, generally drinking something with alcohol in it.

“How are you? You’re amazing, right? I mean how couldn’t you be. We’re here, right? It’s so amazing!”

At a luncheon hosted by brother and sister restaurateurs Ti Martin and Alex Brennan-Martin at The Little Nell, one luncheoner declared that “Aspen,” as the Food & Wine festival held here each year is generally called, is her reward for working hard during the rest of the year.

The city of Aspen is nice. It’s small and pretty, generally sunny but not too hot in June, and it affords some spectacular views of the Rocky Mountains. But the same is also true of Glenwood Springs, Vail, Telluride, Durango, Ouray and numerous other Colorado mountain towns. That’s what Colorado mountain towns do in the summer, and they’re pretty much all less expensive than Aspen (with the possible exception of Vail) and many are easier to get to (especially Vail).

Aspen’s a strange place to hold an event that is largely a series of parties sponsored by spirits, wine and beer companies. At an altitude of around 8,000 feet, Aspen’s thin air helps send alcohol straight to people’s heads, and despite the eager circulation of thousands of bottles of water (provided each year by a sponsor, although Aspen has excellent tap water and the city has an ongoing program encouraging people to drink it), many of the people attending the event feel the effects acutely — from a general rundown feeling to raging hangovers. I even witnessed a couple of seizures a few years ago.

But, now in its 31st year, the Food & Wine classic in Aspen is an institution. It’s the grandfather of food and beverage festivals, and it has evolved quite a bit even in the dozen or so years since I started attending.

I can only imagine what it was like three decades ago, when Food wasn’t a national obsession. Most of the nation’s well-heeled consumers didn’t care much about what they ate — not compared to what they wore, say — and even fewer knew anything about what they drank. Attendees of the classic (then with the slightly more highbrow official name of The Food & Wine Magazine Classic at Aspen — the snob power of a preposition can be amazing) must truly have loved food and wine.

But now food is a national obsession, and chefs even more so. At some point during my years attending the classic, the attendees of the festival seemed to have changed from those appreciating fine things that they could eat and drink to those who wanted to be near anything famous and fashionable.

That makes sense, really. Food is fashionable and chefs are famous, so why shouldn’t they draw those crowds?

That has made me a grumpy Aspen attendee in recent years, however, as I bemoaned having to tolerate rich, shallow people with bad plastic surgery crashing my party, which of course was as much their party as it was mine; arguably more so.

“Don’t be such a grouch!” Claudine Pépin admonished me a few years back as we drank sparkling wine and enjoyed a mountain vista during a party fêting that year’s ten “Best New Chefs.”

She had a point.

So did my publisher, who this week asked how Aspen was this year.

He observed that my same old same old was a lot better than most people’s.

Because, sure, it might be nicer to select from among dozens of Spanish wines while sampling unbelievably fresh grilled head-on shrimp overseen by José Andrés if I didn’t have to suffer the inane observation of the over-privileged locals. And yes, I could have enjoyed more of the bourbon cocktails at the National Pork Board’s party if I were at a lower altitude. And sure, Sean Brock’s fried chicken would have been the best fried chicken I’d ever eaten even if I weren’t sitting with restaurant impresario Drew Nieporent and celebrity chefs Scott Conant and Marcus Samuelsson.

But it all still is pretty amazing.