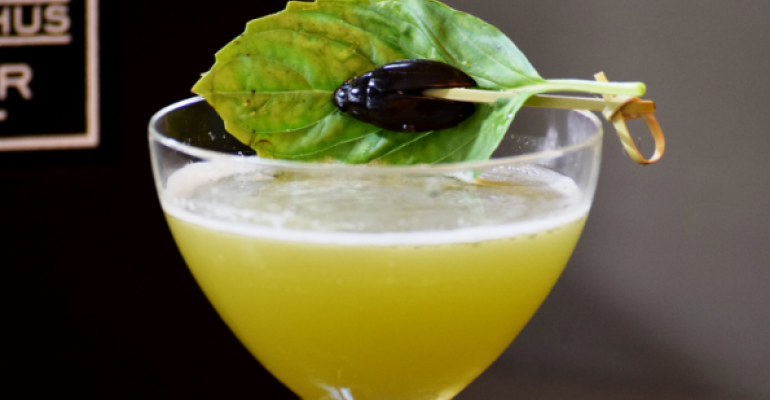 Yes, insects, being eaten by American people with their own mouths, in restaurants, is a thing.

It's not a huge thing, but it's a lot more widespread than I thought it would be when I wrote about its possibility back in 2014.

Back then, the general belief seemed to be that insects, specifically cricket powder, would be insinuated into our food as a nutritious, sustainable protein supplement. And that's happening a little. I have some pasta at home that's 20 percent powdered cricket  (I haven't tried it yet), and more companies are selling cricket "flour" to be mixed into food, or making their own protein bars. That’s what the Baugh brothers, founders of Lithic Nutrition (as in paleo), are doing. They were one of two (2!) cricket exhibitors at the Colorado Restaurant Show last month. The other exhibitor was Rocky Mountain Micro Ranch, which raises crickets for wholesale to food manufacturers and restaurants.

They also had some crickets available for sampling — little fried ones flavored with a choice of sweet masala or Chinese five spice.

Insects are eaten in much of the world. They’re a widespread source of protein in much of Latin America, Asia and Africa. But that doesn't mean Americans don't have a strong psychological barrier to eating them.

Nonetheless, they’ve been available as a sort of novelty item, particularly in some Mexican restaurants, for ten years or more. , chef Julian Medina has been serving grasshopper tacos at Toloache for years.

Hugo Ortega has also long been serving grasshoppers, or chapulines, at Hugo's in Houston, and he severs gusanos del maguey, or mescal worms (which are actually caterpillars) as tacos on the bar menu at Caracol, where he sautées them with white onion, butter and olive oil and finishes them with parsley and serrano peppers.

“People who traveled a lot to Mexico know that such things are a delicacy there had no reservations about ordering them,” Ortega's publicist, Paula Murphy, told me. “But other people were surprised, and curious. They would order [them] almost as a challenge to themselves and their dining companions ... but now they have come to like them and order them because they enjoy them.”

Mario Hernandez has noticed the same thing at The Black Ant in New York, where he said he’s currently going through 25 pounds of grasshoppers a month. Grasshoppers garnishing a scallop appetizer at The Black Ant

That’s a lot, especially considering that he mostly uses them as garnish, although he also crushes them up in salsas. Hernandez says there’s actually considerable seasonality to insects. So, although he’s currently using salted dried grasshoppers and ants (dried, roasted with chile and other spices, and ground into powder), he also uses mescal worms and other insects as they come into season.

In fact, it’s not as a nutritional supplement that insects seem to be catching on in restaurants, but as a shock-value garnish. But wait, there’s more! At Rebel in Denver, grasshoppers are an ingredient in chef-owner Bo Porytko’s ChexMix. At Johnny Sanchez in New Orleans, the modern taqueria that’s done in partnership with celebrity chefs John Besh and Aarón Sanchez, customers have the choice of adding Oaxaca grasshoppers to their guacamole.

One more, and then I'll let you get back to your insect-free diet: At Bacchus Bar at Hotel Vintage in Portland, Ore., the Beetlejuice cocktail is garnished with a dehydrated beetle that I'm told is like a “very crunchy jerky.”