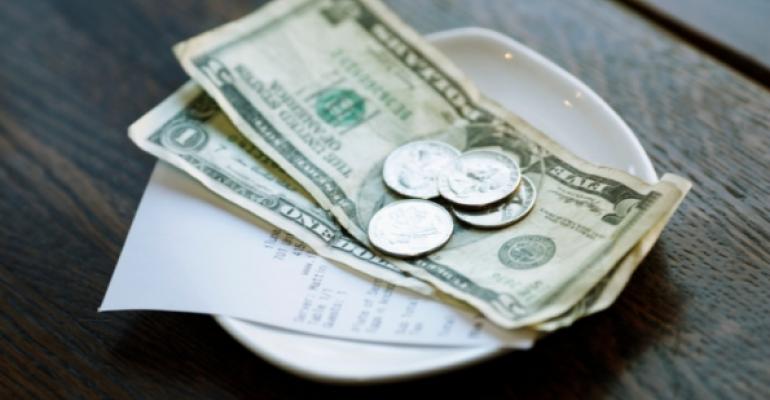 The good news is that 2015 was a much better year than 2014 for the restaurant industry; the bad news is that same-store sales growth continued to decelerate during the fourth quarter.

Same-store sales in 2015 rose 1.6 percent, a 1-percent jump from the growth rate reported in 2014, and a 2.3-percent improvement compared with 2013 results, according to data reported by TDn2K’s Black Box Intelligence through The Restaurant Industry Snapshot, based on weekly sales from over 23,000 restaurant units and more than 120 brands, representing $57 billion dollars in annual revenue.

However, the industry seems to have crawled to the finish line this year, with same-store sales growing 0.4 percent during the fourth quarter, a 1.2-percent drop from third-quarter results, and the lowest quarterly same-store sales growth rate since the third quarter of 2014.

“Although the industry has now experienced six consecutive quarters of positive same-store sales growth, it is important to mention that every quarter since Q1, we have seen lower sales growth rates than during the preceding quarter,” said Victor Fernandez, executive director of insights and knowledge for TDn2K. “What is most concerning when analyzing this persistent slowdown in sales is that the 1.2-percent drop in year-over-year same-store sales growth experienced during Q4 compared with the previous quarter is the largest decline experienced by the industry in over two years.”

The U.S. economy continued to expand during the fourth quarter, particularly with job gains and spending on big-ticket items, but some weakness persists, according to Joel Naroff, president of Naroff Economic Advisors and TDn2K’s retained economist.

“There are holes in the expansion related to the collapse of energy prices and the jump in the value of the dollar. This has led to regional weakness in energy-dependent areas and a softening in the manufacturing sector,” Naroff said. “The differentials in growth across areas created differentials in consumer spending. The TDn2K data clearly shows that some of the weakest areas line up with those states and metropolitan areas that are dependent on the energy sector, manufacturing or tourism, which is hurt by the rising value of the dollar.”

For the fifth consecutive month, California was the best performing region in December, with same-store sales rising a robust 4.2 percent, while achieving same-store traffic growth of 0.1 percent. California has been among states leading the country in reducing their unemployment rate and improving personal income.

On the opposite end of the spectrum, the Southwest has been the worst performing region for four consecutive months. Same-store sales fell 4.4 percent in the Southwest in December, while traffic declined 6.2 percent during the month. The challenges faced by the energy sector seem to be translating to reduced restaurant spending in most of the Southwestern states of Oklahoma, Arkansas, Louisiana and New Mexico.

When looking at performance by individual market, it is clear that the industry has been facing increased regional challenges during the fourth quarter. Of the 193 DMAs tracked by Black Box Intelligence, 55 percent achieved positive same-store sales during December. On average, only half of DMAs tracked attained positive sales growth during the last three months of the year, while the average for the first nine months was a healthier 73 percent of all DMAs with positive same-store sales growth.

The economy produced some very strong job gains during the fourth quarter, and the restaurant industry followed suit with the fifth consecutive month of year-over-year job growth at 4 percent or above. Job growth was 4 percent during November, according to TDn2K’s People Report. The number of people employed in the overall workforce in non-farm jobs has been growing annually at a pace of only about 2 percent in recent months, reflecting the challenge restaurants face when recruiting employees. Given the current labor market environment and the increased need for restaurant employees coupled with high turnover levels experienced by the industry, expect rising wage pressures in 2016.

Restaurant hourly employee turnover increased again in November, becoming the 27th consecutive month of rising turnover levels. Restaurant companies had a short period of flat turnover for restaurant managers in recent months, but management turnover has started to increase again as job growth rebounded in the fourth quarter. The turnover rates for both hourly and management employees are now at historically high levels and present a major obstacle for effective operations at many brands.

From a consumer standpoint, sentiment towards restaurant chains tended again to be very positive during December, as first reported in November, compared with previous months, according to TDn2K’s White Box Social Intelligence, based on a sample of 8.3 million online mentions. The percentage of “Intent to Return” mentions that were positive — 48 percent — had a record-breaking month during December, driven by positive conversations centered on the holidays and celebrating special occasions. Intent to return was strong across all industry segments.

Service-based mentions were less positive than usual during December, with one notable exception. An impressive 58 percent of all service-related mentions were positive for Fine Dining brands during the month. This is likely a reflection of the positive sentiment around celebrating special occasions for the holiday season. Furthermore, the Fine Dining segment was the best performing segment based on percentage of positive mentions on all three attributes tracked for TDn2K’s Restaurant Industry Snapshot (“food”, “service” and “intent to return”). Fine Dining was not a top-performing segment based on any of these attributes during the months of the third quarter, which again highlights the importance of the holiday season in consumer perceptions.

“As we close the year, we find several key dynamics impacting chain restaurant results in 2015 and creating uncertainty for 2016,” said Wallace B. Doolin, founder and chairman of TDn2K. “The macro issues of low unemployment, higher vacancy rates and slower than expected wage growth all impacted the results. Additionally, we now face major regional differences in disposable personal income driven by the energy sector decline.

“The U.S. consumer has returned to big-ticket purchases for cars, homes and technology, all in competition for the all important disposable income necessary for restaurant sales and traffic growth. Obviously, lower fuel prices have boosted disposable income, but we compete for every cent available. The demographic shifts from Boomers to Millennials continue to challenge brands for prioritization of resources to gain or maintain relevance. Regarding the workforce, low unemployment, slow wage growth and hiring difficulty is impacting the results we see in service ratings, labor cost and sales growth.”

The more than 23,000 restaurant units tracked by Black Box Intelligence are in a share-of-stomach competition for the “food away from home” dollar. The best brands are expanding. The increase in prepared foods from progressive grocery stores and C-stores all steal share from the lower quartile pack of restaurants. Independent restaurant growth is also increasing supply and diluting demand.

2016 begins with many questions, but know this for certain: Best-in-class brands, regardless of segment, age or location, continue to win share of stomach by creating a unique strategy, hiring and retaining the best employees, and deploying effective technology ahead of their competitors.