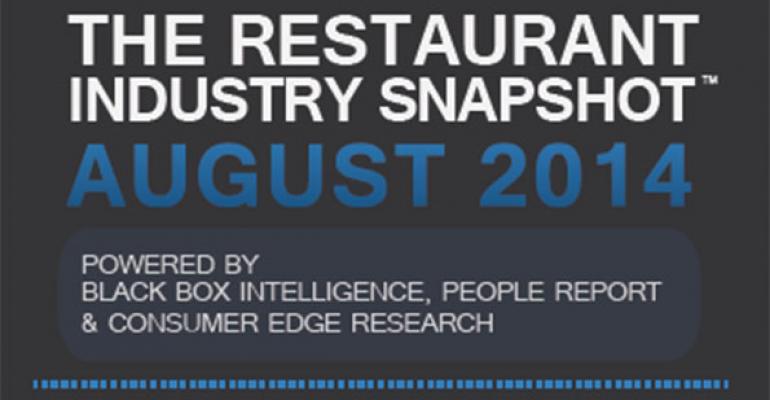 August was the best month for the restaurant industry in terms of sales growth since February 2012, and the industry is poised to achieve two consecutive quarters of positive growth for the first time since the second half of 2012, according to the latest Restaurant Industry Snapshot from TDn2K’s Black Box Intelligence and People Report.

Same-store sales grew 2.1 percent during the month — a 1.6-percent improvement compared with the growth rate reported for July, according to the report, which was released Thursday.

“These latest results are very encouraging for the industry and beat our expectations for the month,” said Victor Fernandez, director of insights and knowledge for TDn2K, parent company of Black Box Intelligence and People Report.

“To put this into perspective, the last time year-over-year same-store sales jumped by [more than] 1.0 percent from one month to the next was from February to March of this year, as the industry climbed its way up from the terrible winter sales results.”

Furthermore, these very positive results from August were not simply a matter of the month having a soft comparison from August of last year. From a two-year basis comparison, the industry’s same-store sales grew by 2.3 percent during the month.

“A key indicator for the restaurant industry is disposable personal income which accelerated its growth during July to almost 2.0% annual growth, enabling the robust same-store sales growth we’ve been experiencing” Fernandez said. “Another key factor is average gas prices, which in August dipped under the $3.50 per gallon mark which Black Box Intelligence has established in the past is where they begin to negatively affect restaurant sales.”

The best performing region during August was Florida, with same-store sales growth of 3.6 percent, while the worst performing region was New York-New Jersey with a 0.2-percent growth rate. “At the individual market level we found that an overwhelming 154 DMAs out of the 188 individual markets tracked by Black Box Intelligence reported positive same-store sales growth during the month,” Fernandez said. “This was simply the best month for restaurants in a very long time.”

Along with these specific results is an economy showing signs of strength overall during the month. The University of Michigan Consumer Sentiment Index hit a seven-year high in August, fueled by improvements in the labor market, a surging stock market, robust momentum in manufacturing growth and strong housing sales.

“A key indicator for the restaurant industry is disposable personal income. The 1.6-percent annual growth we saw in July and the 2.0-percent growth we saw in August enabled the robust same-store sales growth we’ve been experiencing,” Fernandez said. “Another key factor is average gas prices, which in August dipped under the $3.50 per gallon mark which Black Box Intelligence has established in the past is where they begin to negatively affect restaurant sales."

People Report’s latest numbers also show a significant increase in new jobs created by the restaurant industry. Restaurant jobs grew 4.4 percent this year compared with the same period last year. Restaurant chains continue to expand, and hiring is on the rise. The industry also continues to face growing challenges from the staffing perspective as both restaurant manager and hourly employee turnover rates persist on the upward trend of the last few years. According to the People Report Workforce Index, recruiting difficulties, a growing number of vacancies and rising turnover are expected to continue throughout the rest of the year.

Same-store traffic fell 0.5 percent during August, which represents a 1.1-percent increase compared with the traffic growth reported for the previous month. Even though this represents the ninth consecutive month in which the industry has reported declining year-over-year guest counts (and the industry has yet to post a quarter of positive same-store traffic growth since the recession), August produced the best traffic results since November of last year. This improvement notwithstanding, the true challenge for the industry continues to be these declining guest counts, as evidenced by the fact that on a two-year basis, same-store traffic declined by 2.1 percent during August 2014 when compared with the number of guests reported for August 2012.

The Restaurant Industry Snapshot is a compilation of real sales and traffic results from over 180 DMAs from 100+ restaurant brands and approximately 16,000+ restaurants that are clients of Black Box Intelligence, a TDn2K company. Currently, data is reported in four distinct segments: casual dining, upscale/fine dining, fast casual, and family dining. Black Box Intelligence is a sister company to People Report, which tracks the workforce analytics of one million restaurant employees.

Update: Sept. 25, 2014  This story has been changed to update a quote from TDn2K director of insights and knowledge Victor Fernandez.