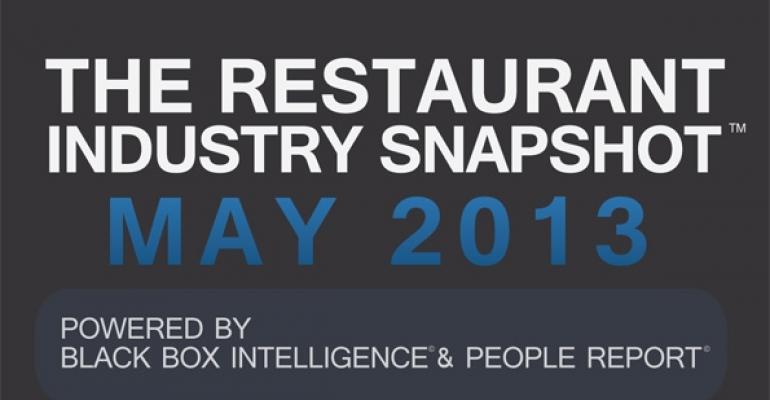 Report: Restaurant sales continue to rise in May

Black Box Intelligence and People Report released The Restaurant Industry Snapshot for May this week, reporting a third straight month of positive sales.

Consumer Edge Research, a partner company to People Report and Black Box Intelligence, released the Restaurant Willingness to Spend Index last week with a value of 88 for May, an increase over the index score of 86 reported for April. Based on historical data gathered through the partnership, an increase in the index score suggests a higher Black Box Intelligence same-stores sales rate in the month of June.

“Sales are still weaker than we would like to see, but three straight positive sales months is a result not seen since last June through August, 2012,” said Bill Schaffler, president at Black Box Intelligence and People Report. “Additionally, we are encouraged the consumer continues to indicate they may be turning a bit of a corner, as they indicated an increased desire to spend their money two months running, a result we have not observed since 2011. This is encouraging news as we enter the summer months.”

In addition, 104 out of 176 DMAs posted a positive result in May. The New England region performed the best with a 3.5-percent same-store sales increase. The Southwest was the lowest-performing area, with a same-store sales decrease of 1.0 percent.

The most recent job growth reported by People Report is an increase of 1.0 percent, higher than last month’s increase of 0.4 percent. The job growth, although positive, remains slower than reported in most of 2012.