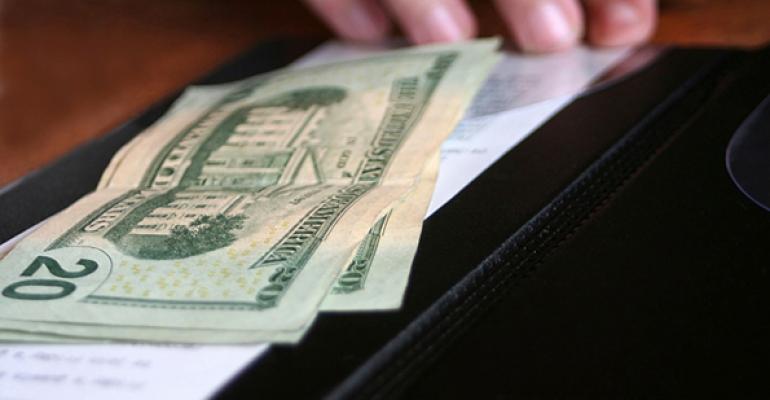 Same-store sales fell 1 percent, a drop of 0.3 percent from March, according to data reported by TDn2K’s Black Box Intelligence through The Restaurant Industry Snapshot, based on weekly sales from over 24,000 restaurant units and more than 120 brands, representing $61 billion dollars in annual revenue.

"April 2015 was relatively strong from a sales growth perspective, which made for a tough comparison this year. However, April’s disappointing results cannot be explained just by this high hurdle," said Victor Fernandez, executive director of insights and knowledge for TDn2K. “From a two-year growth perspective, same-store sales growth averaged 0.9 percent for March and April of 2016 when compared with the same months back in 2014. The two-year average for all months in 2015 was a much more robust 2.5 percent.”

The industry has now reported two consecutive months of negative year-over-year growth, and the average rate for all months since the beginning of the fourth quarter is flat, fueling concerns that 2016 may be another year of contraction for restaurant chains. Year-to-date sales have fallen 0.5 percent.

But TDn2K economist Joel Naroff said that consumer spending could pick up during the rest of the year.

“Despite solid income growth, the consumer continues to spend cautiously. Retail sales have been soft through the first quarter of the year, but the less-than-stellar April jobs report shouldn’t be interpreted as a sign that the economy is faltering. Wage gains were robust and the latest improving data on job openings point to an economy where businesses are still looking for a lot of workers. It is likely that the rising compensation will soon be spent. It is just not clear when that turnaround will begin,” Naroff said.

The main concern for the industry continues to be customer counts. Same-store traffic fell 3.5 percent in April, the worst result since February 2014, and a 0.8-percent decline from March.

The importance of value for consumers can readily be perceived when analyzing sales results by industry segment. For the last two months, as the industry’s overall sales growth dropped into negative territory, the best performing segment by far has been by far quick service. Additionally, according to Black Box Intelligence research, quick service was also the only segment that significantly gained sales market share year-over-year by the end of 2015.

In addition to restaurant sales and traffic challenges so far this year, workforce-related difficulties also continue to escalate. According to a recent poll by TDn2K, operators’ biggest workforce-related concern is finding enough qualified employees to fill vacancies. Almost 75 percent of restaurant companies reported this as their biggest worry for the year. The drivers behind this concern are rapid job growth coupled with alarmingly high turnover and vacancy rates.

Data from TDn2K’s People Report show that the number of jobs in the industry grew 4.4 percent year-over-year during March. The average growth rate since the beginning of the year has been 4 percent. For over two years the restaurant industry has been outpacing both the overall economy and the retail industry in job creation, which highlights why filling vacancies is such a challenge for restaurants.

Restaurant hourly employee turnover rose again during March, the 31st consecutive month in which turnover has increased or remained flat. Management turnover is another crucial challenge for operators, as turnover rates have returned to pre-recession levels, and are now exceeding those rates.

“As we approach full employment, and new vacancies are likely going to be filled by someone who already has a job, turnover rates will continue to be a challenge and not likely to drop any time soon,” Fernandez said.

As sales continue to fall, the impact of employee and management turnover on profitability becomes even more troublesome. In addition to the significant direct costs associated with turnover, TDn2K research has continuously shown that companies with lower turnover tend to perform better based on same-store sales and traffic. The data also show a link between service, customer satisfaction and turnover.

TDn2K’s White Box Social Intelligence tracked particularly interesting results in April. For the first time since October, casual dining was the industry segment with the highest percentage of positive food-based mentions. Fine dining dominated (“food,” “service” and “intent to return”) for the last six months. This could indicate that casual dining’s emphasis on food quality is starting to pay off in the eyes of the consumer. The segment has struggled recently based on sales growth, so this could be very welcome news and a leading indicator that some improvement is ahead.

TDn2K’s White Box Social Intelligence is closely following an overall trend of increasing online service-related mentions, with the percentage of negative mentions also increasing. It seems that customer satisfaction is sinking when it comes to service, and people are talking about it online. As the industry continues to struggle with vacancies and turnover, a continued negative effect on service levels and customer satisfaction is to be expected. The connection of the employee experience and the customer experience has never been clearer — or more important to get right.