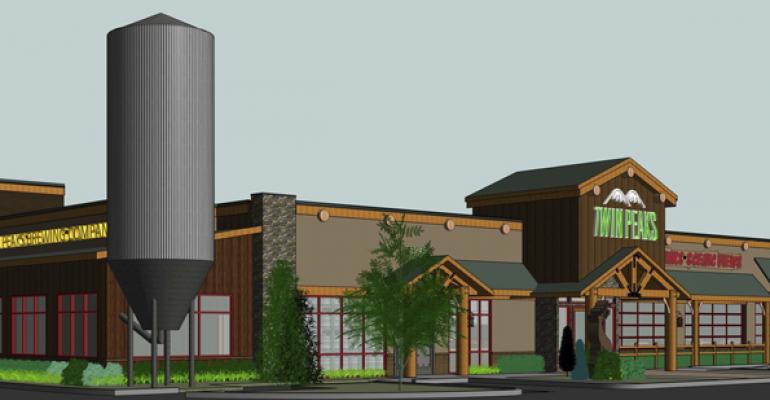 Chain to brew its own beers in a brewery to be added to a North Irving, Texas, restaurant

The casual-dining chain, which is known for its buxom waitresses, already emphasizes its selection of 29-degrees-Fahrenheit tap beers.

Addison, Texas-based parent company Front Burner Restaurants LP is building a 2,800-square-foot brewery addition to its newest Dallas-Fort Worth location in North Irving, which opened earlier this year in a converted Luby’s cafeteria unit. The City of Irving has also approved a 27-foot-tall grain silo as part of the addition.

Tom Janik, the brew master for Twin Peaks, said the new brewing facility is scheduled open later in the year and will provide signature beers for another eight Twin Peaks restaurants in the area and possibly others in Texas.

“We’re hoping that we will be brewing right after Thanksgiving,” Janik said. “That should have us with product ready to be consumed by mid-December or Christmas, at the latest. All the dates are subject to change.”

For several years, Twin Peaks has offered a couple of in-house beers, including the Dirty Blonde and the Naughty Brunette. Those were contract-brewed by a local microbrewery. When the new brewery opens, Twin Peaks will add a third proprietary beer, a pale ale called Ginger’s Ale, Janik said.

“The company is also growing to the point that it could use the production capacity,” said Janik. “Not only is there demand, but the number of stores could max out a brewing facility. It also puts the company in charge of product quality.”

He said that control over quality is the biggest advantage of the brewery project. “It also allows us to tweak or fine-tune recipes as we see fit,” said Janik, who was brew master at the local Humperdink’s chain for 17 years before joining Twin Peaks.

The Texas Legislature changed some laws earlier this year to allow brew pubs to distribute beer. “That upped the production capacity and allowed for the distribution of products from one location,” Janik said.

The new legislation doubled the previous limits on brewpub production to allow restaurants with a brewery to sell 10,000 barrels of beer a year. The legislation also allowed craft brewers with a mixed-beverage permit to sell limited amounts of beer to distributors and retailers.

Twin Peaks, founded in 2005 in Lewisville, Texas, has 38 locations in 17 states. There are eight Twin Peaks restaurants in the Dallas-Fort Worth metropolitan area and 16 total units in Texas throughout Austin, Dallas, Houston, Odessa and San Antonio. In the next few months, the company plans to add one more unit in the DFW area, as well as one each in San Angelo and El Paso.