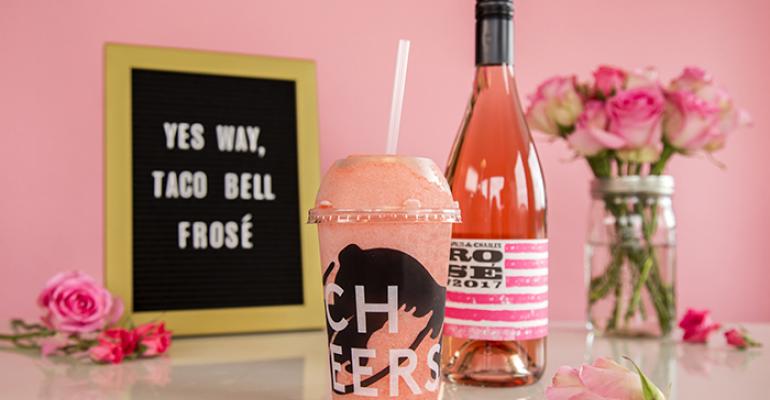 The Irvine, Calif.-based quick-service chain is testing a Berry Frosé Twisted Freeze at two Cantina restaurants in Newport Beach, Calif., and Chicago. The 16-ounce drink contains a berry-blend “Freeze” base, created especially for the Cantinas, and 2 ounces of rosé wine from Charles & Charles. The Washington State winemaker is known for its abstract American flag labels created by the legendary Nashville, Tenn., poster shop Hatch Show Print. The frosé beverage debuts at both restaurants on Wednesday, priced at $7.99 in Southern California, and $5.49 in Chicago.

“Ultimately, if it does well, we’d like to bring it to all of our Cantinas,” said Alec Treffers, Taco Bell’s public affairs and brand reputation specialist.

The test comes as the chain’s Newport Beach Cantina, which opened in December, recently expanded its alcohol license to include beer and wine sales. When it opened, it only sold beer. Most Cantina restaurants sell beer and wine, but navigating the licensing in each state has, in some cases, delayed the sale of certain alcoholic drinks.

The beer and wine license in Newport Beach also allows the Cantina to sell drinks infused with fermented (not distilled) tequila, rum and vodka.

Customers can choose to “spike” Taco Bell’s Freeze drinks with 2 ounces of their favorite non-distilled spirit. However, Twisted Freezes were not available in Southern California until a couple of weeks ago, Treffers said.

The Newport Beach Cantina, one of about dozen Cantinas around the country, is the only Taco Bell bar/lounge serving the chain’s first-ever branded beer, a collaboration with the local brewery Four Sons Brewing in Huntington Beach, Calif.

The Mexican-style amber lager, called Beach Bell, was developed to complement items on the Cantina menu.

The first Cantina opened in Chicago, in 2015. The flashy, no-drive-thru concept is part of Taco Bell’s strategy to refresh the look of its restaurants, especially in urban markets. Each Cantina embraces the surrounding community with unique decor, furniture and food. In Newport Beach, the tiny storefront is steps away from one of California’s most popular and tourist-packed beaches.

The 14-seat bar is made of partially reclaimed wood. The dining room has large, bi-fold windows that allow diners to watch the bustling surf community while dining on their favorite Mexican mashup meal.

When Taco Bell opened the Cantina in Newport Beach, the first near its corporate headquarters, the company projected it would open about 300 of these urban locations over the next five years. Not every urban location would have alcohol.

The Cantina menu features the regular Taco Bell menu in addition to a few shareable meals that are exclusive to the concept. Food is served in black plastic baskets for sit-down customers.

Cantinas tend to be open later than traditional Taco Bell units. A Cantina on the Las Vegas Strip is open 24 hours. The Newport Beach location is open daily from 7 a.m. to 2 a.m.

Update June 7, 2018: This story has been updated to clarify the price of the frosé beverage, which is $7.99 in Southern California and $5.49 in Chicago.