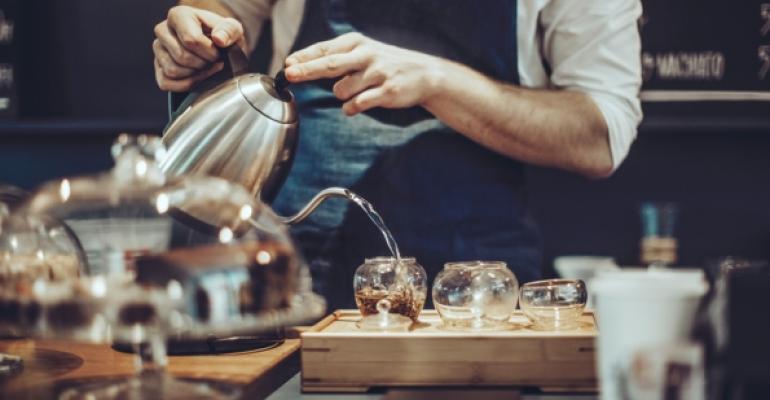 In a growing number of restaurants, iced tea has evolved from a commodity into a highly profitable signature item. It is offered in a variety of styles, ranging from exotic flavored refreshers to stylish cocktails and mocktails to frothy nitro tea on tap. Along with hot tea, it is a cornerstone of beverage profitability and increasingly a consumer favorite.

In fact, specialty iced tea, including Thai-style, Southern/sweet, flavored and matcha tea, was the third hottest nonalcoholic beverage in the National Restaurant Association’s 2016 What’s Hot Culinary Forecast. And a Packaged Facts report this year pegged tea as a $20 billion market in foodservice and predicted that it would have the edge on coffee in growth momentum through 2018 and beyond.

Thus it’s high time for restaurant operators to upgrade their tea, according to Scott Svihula, owner of Hula Consulting, an Orlando, Fla.-based tea and coffee consultancy. The first step is using high quality tea. Flavor is a key driver of iced tea sales, and the profit margin of tea is so inherently large that the cost difference between so-so and great tasting tea is negligible.

For example, an operator who pays $30 per case for tea runs a cost of about 5 cents per 16-ounce glass, Svihula says. But upgrading to an $80-per-case tea, which is more flavorful and will sell more glasses, raises the cost to only 8 or 9 cents per serving. Priced at a typical $2.50 to $2.90 per glass, the upgraded brew still has a gross profit percentage in the high 90s.

“There is not another menu item that you can improve upon so much without affecting your gross profit,” says Svihula. And the profit climbs even higher when tea is leveraged in cocktails and alcohol-free mocktails, he adds.

Having tackled the iced tea opportunity, the next step for many operators is improving the tea used for brewing hot tea by the cup and by the pot, another upgrade that pays off in higher profits, Svihula says.

Some establishments go to great lengths to make tea a standout experience. For example, The Commons Club lounge at Virgin Hotels Chicago sports a list of more than a dozen fine and rare teas representing black, green, oolong, white, pu-erh and herbal styles. They range from an organically grown English Breakfast priced at $7 per pot to a 1982 cave-aged pu-erh with a $55 price tag.

Not unlike a good wine list, The Commons Club tea list includes tasting notes. Emperor’s Dragonwell, an organic Chinese green tea, is described as nutty with nuances of honey and pine, high in antioxidants and low in caffeine. Listing the relative caffeine level of various teas is important to some tea drinkers.

“At times, people are looking to wind down with tea, but other times they want a pick-me-up,” says Harris. “I definitely think it informs peoples’ decisions.”

At The Cafe at LeFlour in Chicago, nitro chai tea on tap is the brand new sensation for tea drinkers, priced at $3.95 for a 10-ounce glass.

“The tea looks like a light beer,” says Kristen Polich, co-owner of The Cafe.   “You let it sit in the glass for 30 seconds or so and watch it cascade and slowly rise. It ends up with a little foam on top like the head on a beer.”

She has been selling the nitro chai tea along with nitro coffee for about two weeks. Each product is prepared and kegged by a local coffee roaster and propelled through the tap by a nitrogen gas system. When the nitro chai, which is made with black tea and masala spices, runs its course, The Cafe will tap a peach punch and black tea blend, Polich says.

So far, The Cafe is selling five to 10 glasses of nitro chai tea per day on average. But Polich expects more. “I think it is just a matter of getting the word out that this is the next thing and that you can get it with nitro,” says Polich. “We wanted to get in on it before it became mainstream.”