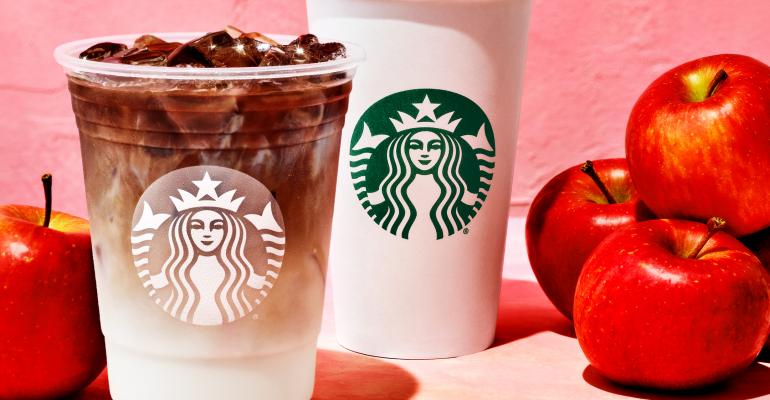 Starbucks
This is the first apple-flavored fall coffee beverage to be introduced at Starbucks.
Menu>Beverage Trends

Plus, pumpkin spice everything returns Aug. 24

Starbucks announced Tuesday its fall food and drink lineup, including the return of its iconic pumpkin spice latte and the new Apple Crisp Macchiato, coming to Starbucks locations on Aug. 24.

The Apple Crisp Macchiato is made with apple and brown sugar flavors, mixed with espresso, steamed milk, and topped with a crosshatch of caramelized apple spice drizzle. Each macchiato is shaken with new brown sugar apple syrup and the apple drizzle is made from apple juice, apple puree, cinnamon and nutmeg on top of steamed milk foam.  The drink is available hot or iced.

“For many customers, Starbucks signals the start of the fall season and has inspired a cultural phenomenon around fall flavor and products,” said Raegan Powell, senior manager on the Starbucks research and development team, in a statement. “Fall at Starbucks brings customers back to the nostalgic flavors of the season and our team used that inspiration to create a new flavor that celebrates those feelings of comfort and familiarity.”

The new drink was created after Starbucks teams tasted all manner of apple flavor possibilities, including apple maple syrup, apple cider donuts, as well as apple pies, cakes, and crisps.

“Creating an ingredient with a spicy baked apple flavor was crucial to be able to bridge an autumn red apple to espresso,” Powell said in a statement. “Consider how well a delicious slice of warm apple pie pairs with a cup of coffee or how well the combination of Starbucks espresso pairs with warm spices such as cinnamon and nutmeg.”

In addition to the Apple Crisp Macchiato launching Aug. 24, Starbucks’ pumpkin spice latte is back for its 18th year on the same day, along with pumpkin cold brew, pumpkin cream cheese muffins and pumpkin scones.