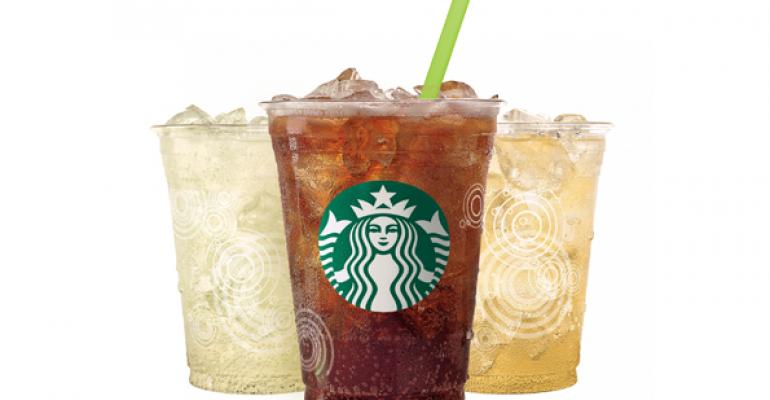 Company will also roll out new sandwiches, iced teas as part of growth beyond morning daypart

Starbucks will roll out Tuesday its long-awaited Fizzio handcrafted soda line to more than 3,000 locations across the country, along with new flavors of its Shaken Iced Teas.

The Seattle-based coffeehouse operator will also introduce new seasonal sandwiches — an Old-Fashioned Grilled Cheese, with a blend of Cheddar and mozzarella on multi-grain bread, and a Turkey Pesto Panini, with melted provolone and roasted peppers on focaccia.

The menu moves are all part of Starbucks’ ongoing effort to build sales beyond the traditional morning daypart. The new soda line is expected to enhance food attachments at lunch in particular.

Available in three flavors — Spiced Root Beer, Golden Ginger Ale and Lemon Ale — the Fizzio drinks are made to order with a carbonation machine that allows guests to adjust the amount of fizz.

The drinks contain no artificial flavors, preservatives or high-fructose corn syrup. A 16-ounce serving has about 100 calories.

The iced tea line will be available nationwide starting Tuesday, and includes the return of Teavana Peach Tea Lemonade.

The new tea drinks are lightly sweetened and “vigorously hand-shaken 10 times” to bring out distinct flavors, the company said.

In addition to the peach version, new flavors include Blackberry Mojito Tea Lemonade, with blackberry, mint, green tea and a splash of lemonade, and Black Tea Lemonade, including a mix of three black teas with lemonade.

Earlier, Starbucks said it plans to expand its beer and wine program in the evenings to up to 1,000 units across the U.S. within a few years, along with a small plates menu. Later this year, the company expects its La Boulange brand to debut new lunch offerings.

Starbucks Corp. operates and licenses a total of 20,519 units across its brands, which include its namesake coffeehouse, Teavana, Tazo Tea, Evolution Fresh, La Boulange and Seattle’s Best Coffee.