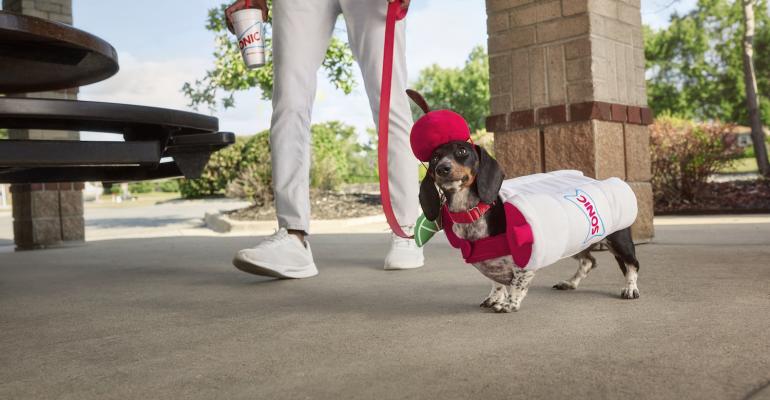 Quick-service chain Sonic Drive-in is moving away from its traditional two-people-in-a-car commercials in its latest round of advertisements and instead will highlight the 3,500 restaurants’ food and their promise of a brief escape from everyday life.

The first spot, highlighting the Chophouse Cheeseburger launched in August, shows a dad at his child’s football game daydreaming about being in a Montreal steakhouse.

That burger is available through Oct. 30, but a similar sandwich is being introduced on Oct. 24 and will be available through Dec. 26 while supplies last. The new Steak Butter Bacon Cheeseburger has grilled onions, two slices of American cheese and mayonnaise, plus a dollop of a compound butter made with Montreal steakhouse seasoning that is scooped on top of the beef patty.

Related: Tanishia Beacham is helping Sonic Drive-In use technology and support systems to focus on people

Sonic completed a burger improvement project last year that included standardization of the burger build, including a lighter bun that toasts and transfers heat better, a thicker beef patty, chopped lettuce instead of shredded lettuce, fresh pickles instead of shelf-stable ones and onions that are chopped in-house.

In December, Sonic plans to debut another grilled cheese sandwich. It offered a grilled cheese burger as a limited-time offer in September of 2021. The new Steak and Bacon Grilled cheese is made with grilled steak, bacon, melted American cheese and barbecue sauce, and also comes in a spicier version with jalapeño peppers and spicy cheese sauce. It will be available through Feb. 26 while supplies last.

Sonic is also further expanding its offerings of tots. The chain already sells more potato tots than fries, according to Mackenzie Gibson, the chain’s vice president of culinary & menu innovation. It’s currently also offering broccoli cheddar tots, and on January 30, 2023, it will roll out BBQ Potato Chip Seasoned Tots, which will be available through March 26 while supplies last.

Sonic indicated that other flavored tots, such as dill and garlic-Parmesan, might be introduced in the future.

The chain also has expanded its line of branded alcohol products, which already includes hard seltzer brewed for it by COOP Ale Works, which like Sonic is based in Oklahoma City, Okla. The branded products are not available at Sonic restaurants, which don’t have liquor licenses, but are available for retail in 40 states.

COOP is now rolling out hard sweet tea and hard slushes in cherry limeade, watermelon, and blue raspberry flavors. The slushes contain 6% alcohol, and so don’t become solid in a conventional freezer, but they do become slushy, according to COOP president Sean Mossman.

Sonic also has rolled out a line of dog costumes and toys, available at SonicsWagShop.com, for Halloween and beyond. Dogs can be dressed as a cherry limeade or as a hot dog, and squeaking plush toys in the shapes of Sonic menu items also are available, along with bandanas. Hats for people, with pictures of Sonic’s hot dogs and an actual dog and the words “I’m a dog person” are also available.