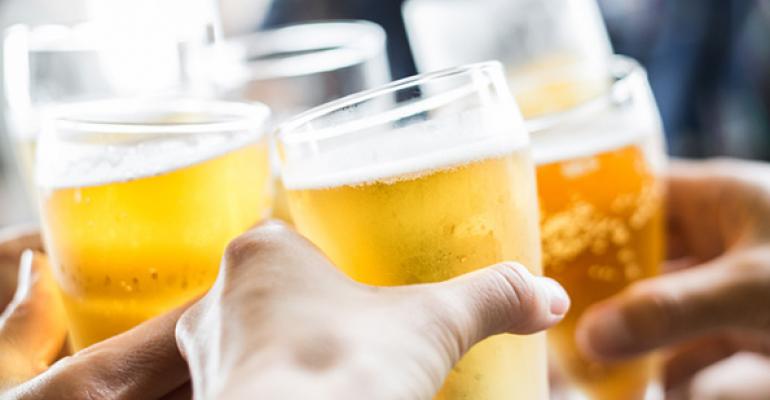 American beer drinkers are drinking less but consuming more craft and imported brews, with total volume declining 2 percent, but with sales rising 21 percent between 2010 and 2015, according to a report by global consumer research firm Mintel.

Those gains are largely in craft beer and imports, with market share of most mainstream brands slipping, according to the company’s report, Beer US 2016, released earlier this year.

Flavored beer also appears to be a growing category, and accounted for 27 percent of all new beer launches in 2015, rising from 15 percent in 2010. Twenty percent of beer drinkers said they drank flavored beer in 2015, and 58 percent of drinkers of any kind of alcohol, not just beer, said they were interested in trying fruit-flavored beer, according to the report.

“Mintel research reveals an explosion of innovation in the flavored beer category,” Mintel food and drink analyst Beth Bloom said in a press release. “The fact that well over half of all U.S. alcohol drinkers say they are interested in flavored beer highlights a significant opportunity to boost participation in the beer category.”

Although the most popular descriptors in flavored beer launches were pumpkin, “spice” or “spicy,” coffee and chocolate, they only accounted for 5.3 percent of new beers. The remaining 21.7 percent of beer identified as “flavored” used other descriptors, including fruit varieties such as pineapple and grapefruit.

Mintel noted that related to interest in fruit-flavored alcohol, cider consumption grew fivefold between 2010 to 2015, to an estimated 31 million cases. That consumption was driven by Millennials, 23 percent of whom say they enjoy cider, compared with 15 percent of all consumers ages 22 or older.

Light beer remains the largest beer category, but its market share is slipping: It was down to 47 percent in 2015, compared with 53 percent in 2010.

“‘Light’ may have a stronger appeal for its drinkability rather than as a means to control calories, such as among men and those who drink beer specifically in the pursuit of fun,” the report said.

Categories that gained ground in terms of market share were super-premium and premium beer, rising 0.4 percentage points, to 14.7 percent; imported beer, growing 2.5 percentage points to 15.5 percent; and craft beer, which nearly doubled, from 5.2 percent to 10.2 percent.

The Brewers Association, which represents craft brewers that produce fewer than 6 million barrels annually, disputes that figure and claims to represent 12 percent of all beer consumption in the country.

Regardless of the exact figures, 30 percent of beer drinkers, when asked which kinds of beer they had drunk in the three months before October 2015, said they had what Mintel calls “craft-style” beer from national producers, such as Blue Moon or Shock Top, while 23 percent said they had tried “true craft” beer made by smaller producers such as Ommegang and Dogfish Head.

Light beer not only accounts for 47 percent of sales volume, but 47 percent of beer drinkers said they had it in the three months to October 2015.

Behind light beer, imported beer is the most popular category, with 44 percent saying they had it, compared with 40 percent who said they had domestic beer.

Mintel concluded that a shift is underway in what beers Americans are drinking.

Although sales volumes were down slightly, it said “growth areas such as craft, imports, and flavored offerings suggest opportunity as beer competes with other alcoholic beverages for attention.”