The subsidiary of JAB Holding plans to grow Calif.-based Revive through its 400 coffeehouses

Peet's Coffee, a subsidiary of JAB Holding Co., has purchased a majority stake in a Northern California kombucha brewery, Revive, with the intent of broadening the company’s nationwide distribution.

Terms of the deal with Revive Kombucha, a craft brewery in Petaluma, Ca., were not disclosed.

Revive, a family-run company founded in 2010, produces a line of organic, non-GMO and fair trade certified kombucha. The rapidly growing company sells its line of kombucha in ready-to-drink bottles and on tap. Grocery chains that carry the brand include Smart & Final, Mother’s Market and Whole Foods Market in California, Natural Grocers in Colorado and Fresh Market stores in Florida, according to the company’s website. 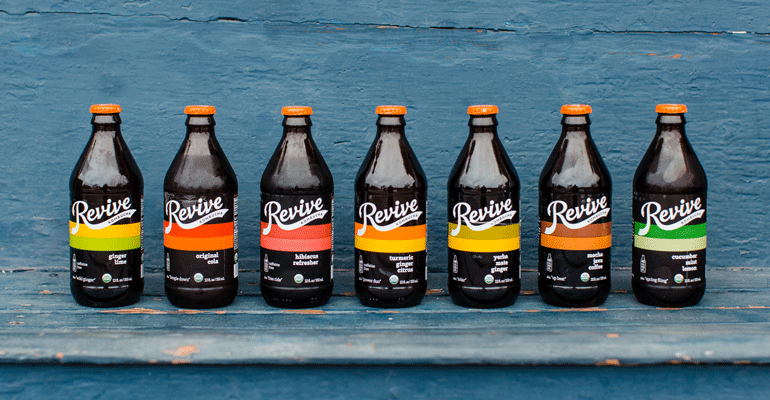 Emeryville, Ca.-based Peet’s, which has more than 400 locations nationwide, has been selling Revive bottles at select locations since last year. The chain plans to grow Revive’s reach by beefing up operations to increase retail distribution, especially in California. Adding kombucha taps in some of its coffee bars is also in the works.

“Peet’s will help scale the Revive team grow its brewery operations, and broaden its distribution through Peet’s networks with a strong focus on California,” Peet’s and Revive told Nation’s Restaurant News in a joint statement.

Specifically, Peet’s said the chain is “excited about possibilities with on-tap kegs.”

Germany-based JAB Holding’s portfolio also includes Panera Bread, Caribou Coffee Company, Pret a Manger, Krispy Kreme and Bruegger’s Bagels, opening up the possibility that Revive could show up on the shelves of JAB’s other brands.

“There are certainly many unique opportunities between Peet’s Coffee and the other brands in the JAB portfolio,” Peet’s said in a statement. “In collaboration with Keurig Dr Pepper, we’ve been broadening our relationship through the recently launched Peet’s True Iced Espresso. Ultimately, there’s potential to explore additional synergies between the brands.”

Sean J. Lovett, CEO and co-founder of Revive, said the deal with Peet’s allows the company to bring “our super tasty and good-for-you beverages to a larger audience.”

Lovett and his wife Rebekah started Revive in 2010 and soon gained a following from locals at the Sonoma County Farmers Market. The brand’s unusual fermented drink flavors include original cola, hibiscus refresher, mocha java coffee, and yerba mate ginger.  The husband-and-wife team said they will keep their equity and leadership positions at the company.