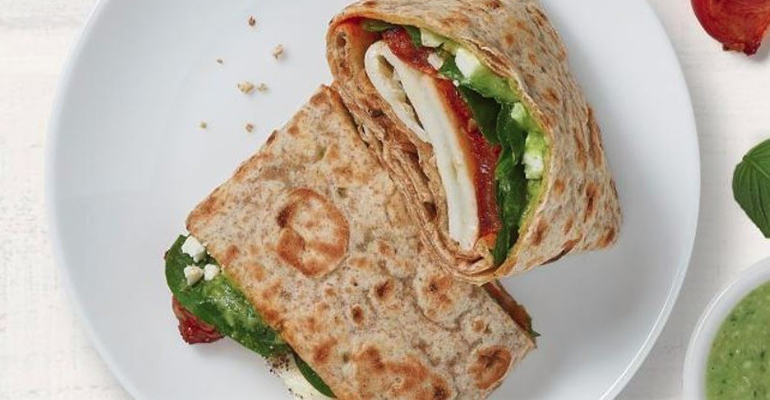 The company is also testing a self-serve coffee program

Panera Bread Co. is improving its breakfast offerings with the addition of three egg wraps, new bakery items and a revamped coffee program that includes a line of cold brew options.

The tech-forward company, an early adopter with kiosks, is also embarking on a new Amazon Go-inspired test for fetching coffee in cafes without human interaction.

The revamped breakfast menu, which also includes a new line of hot coffee, comes about four months after Panera Bread expanded its in-house delivery program to include breakfast. Since then, morning delivery has expanded from nearly 400 locations to 624 cafes, the St. Louis-based bakery-cafe chain said Monday.

The new offerings will be available for delivery through the brand’s app, which now features a quick “reorder” function.

The new baked goods include: Cheese and Cherry Brittanys; Almond and Chocolate Croissants; Cinnamon Crunch, Blueberry and Orange Scones; a Cocoa & Creme cookie; a Brownie and a Vanilla Cinnamon Roll.

Cafes are also replacing the brand’s dark and light roast coffees with new “light and dark roast” blends with “perfected” balance, the company said in a release. Panera said the bright and sweet light roast has soft and smooth notes of citrus, roasted nuts and chocolate; the dark roast is full-bodied with rich, chocolate flavors, the company said. Both blends are made from a combination of Central American and South American beans. The beans are ground on-site at each store.

The new coffee menu, which will retain the current Hazelnut and decaffeinated offerings, will be available in Panera bakery-cafes nationwide by late summer, the company said.

Consumers can also expect revamped coffee stations, which will be “refreshed” to match the quality of the coffee, the company said.

With convenience a high priority for consumers, Panera Bread said the morning menu overhaul targets on-the-go consumers looking for easy-to-order breakfast foods without sacrificing quality. The company is also testing an Amazon Go-style service for fetching coffee in restaurants without interacting with a cashier.

The “Panera Tap” test, which starts next month in the Raleigh-Durham, N.C., market, will allow guests to purchase coffee in-store via the Panera app without waiting in line at the register or a kiosk.

Coffee stations will have a poster with a code that customers will tap and pay with their phone using the Panera app. A regular hot coffee in Orange, Calif., sells for $2.49, according to the Panera app.

Panera’s coffee program improvements come at a time when quick-service chains are upgrading their java offerings amid an increase in orders. Coffee servings ordered at U.S. quick service restaurants went up by 2% to 6.5 billion cups ordered for the year ended December 2018, according to data by The NPD Group/CREST.

In March, select Burger King restaurants across the U.S. began offering coffee subscriptions for a $5 monthly fee. The company also dropped the non-subscription price of a small coffee to 50 cents.

McDonald’s, Carl’s Jr. and Dunkin’ have also improved their coffee and espresso offerings.