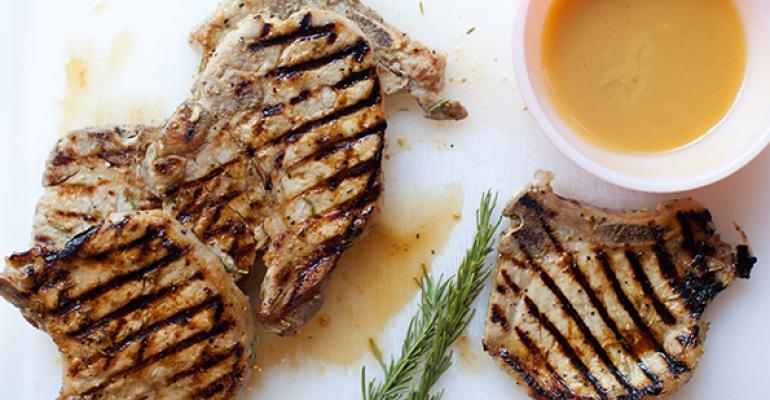 In a special series, NRN editors predict the trends that will emerge in the coming year in all areas of the restaurant industry. Here, Bret Thorn tells us what&rsquo;s next in food and beverage.

Customizability and fast service are likely to be significant drivers of restaurant business in 2015.

The fast-casual service style, in which customers order and watch their food made in front of them, has trained diners to expect exactly what they want when they want it. Combine that with the rapid spread of highly functional mobile technology, mobile ordering and payment systems, and you have consumers with high expectations for instant gratification. Those expectations will likely drive trends in restaurants in 2015.

So will this: As the U.S. economy continues to improve — gross domestic product is currently growing at 3.9 percent, according to the U.S. Bureau of Economic Analysis — and the public’s growing infatuation with food accelerates, so will the proliferation of premium products and customers willing to spend more money on them.

We’ll likely see restaurant customers continue to trade up from traditional quick service to fast-casual dining, and from casual dining to polished casual. Barring any new economic catastrophes, fine dining will probably continue to flourish, as it did in 2014. Corporate dining will buoy that spending. Dinova, a company that connects restaurants to business travelers and event planners, projects corporate dining to increase between 5 percent and 8 percent of spending in 2015.

When it comes to food, “fresh” will probably remain the most resonant, if undefined, buzzword in the marketplace, as it has for at least the past decade, followed by “natural.” Local sourcing, though important to some consumers, might continue to give way to the notion of authenticity.

Apart from those broad trends — and an expanding interest in spicy food that shouldn’t be ignored — changes in nomenclature, technology, pricing and a slowly expanding sense of adventure among many Americans will be brought to bear on the marketplace in 2015, when we will also likely see the following:

This January’s Meat Buyers Guide, published by the North American Meat Association, will have several new designations for “pork chop.” Rather than that generic term, meat buyers can now specify what part of the pork loin they want to buy, similarly to what they have done with beef loin and shoulder for years. Just as chefs and restaurateurs have been able to buy porterhouse, T-bone, ribeye and sirloin steaks, in 2015 they will be able to buy those same cuts in pork-chop form. This should allow restaurateurs to raise the perceived value of pork chops and thus charge more for them.

Some chains have already done that. Both Brio Tuscan Grille and Outback Steakhouse currently have pork porterhouses on their menus.

Improved quality in pre-cooked, microwavable pasta means we’re likely to see it in restaurants that aren’t prepared to cook it in-house. Schlotzsky’s is reportedly testing pasta in some locations, and McAlister’s Deli is planning to offer four pasta dishes as limited-time offers in the first quarter of 2015, following successful tests this year.

King and sockeye salmon are the darlings of independent restaurants, and coho has gained traction in some noncommercial dining facilities. But as prices for all animal proteins continue to rise, other species of wild salmon are also making it onto menus.

In 2014, Denny’s introduced keta salmon to its core menu nationwide. Also known unflatteringly as chum salmon, or “dogs” by Alaska fishermen, this relatively lean wild salmon enjoys wide distribution in Alaska and is priced lower than its higher-profile cousins.

So is pink salmon — the smallest species and one that traditionally has been canned. It’s also lean and small-flaked, but it’s becoming increasingly available as frozen fillets and in such value-added forms as salmon burgers and marinated steaks, making it more convenient in a wider variety of foodservice settings — something restaurateurs are likely to take advantage of in 2015.

Datassential reports that lamb is the fastest-growing animal protein on restaurant menus, and in 2014 appeared on 13-percent more menus than in 2010.

Much of that growth is outside fine dining, where lamb is traditionally served. Its presence is actually shrinking in fine dining: The price of rack of lamb has spiked by more than 50 percent over the past year.

Prices for 81-percent lean ground beef have risen more than 26 percent over the past year, and 80-percent lean ground lamb prices have increased around 11 percent, according to commodities expert John Barone. With ground beef prices expected to continue to rise in 2015, and more Americans are showing willingness to try the slightly exotic, expect to see more lamb in casual venues next year.

As coffeehouses with single-origin brews and relatively technical brewing methods proliferate, expect consumer demands for better coffee to trickle down to non-coffee specialists in 2015.

Chick-fil-A turned up the heat in the quick-service coffee wars in August with the introduction of the first coffee in that segment to fit the criteria of the Specialty Coffee Association of America. The Atlanta-based chicken chain is also working with Thrive Farmers Coffee to source beans directly from farmers. Thrive Farmers is selecting and roasting beans to pair well with Chick-fil-A’s food.

2014 was the year of the IPA, and 2015 is looking to be the second year of the IPA. According to retail scan data reported by the Craft Brewers Association, IPA sales have risen 49 percent in dollar terms and now account for 23 percent of off-premise beer sales.

On-premise, the menu incidence of IPAs has risen nearly 40 percent year-over-year as of the third quarter of 2014, according to restaurant research firm Technomic. The number of operators specifically mentioning IPAs on their beer menus has increased 33 percent during that period.

No other type of beer comes close to that kind of growth, but it’s worth noting that sales of beer variety packs in retail settings have risen 24 percent by dollar sales, so giving guests choices remains crucial.

Although the number of vegetarians and vegans in the U.S. doesn’t seem to be rising very quickly, a growing number of people seem to be cutting back on meat and looking for alternative ways to fill up.

Although some chains, such as fast-casual sandwich maker Which Wich, are testing meat substitutes, others are taking different a approach.

Salata, a 40-unit chain based in Houston, recently added quinoa, falafel and tofu to its salad bar. P.F. Chang’s currently offers at its Dallas locations quinoa as a substitute for rice, for a $2 surcharge.

Protein was a hot ticket in 2014, and it will likely be a dietary priority for many Americans in 2015. But as they seek to slim down or to lower their carbon footprint, and as animal protein prices continue to rise, you can expect to see more plant-based protein on menus.

Imports of this affordable luxury from Spain grew an average 3 percent per year between 2003 and 2013, but the year to August saw 7-percent year-over-year growth — an indication that it may have reached a tipping point. The vinegar will be used to add a sense of place and authenticity to menu items in 2015.

This one is a wilder guess than the previous predictions, but consider the growth of nose-to-tail cooking at independent restaurants and the rise of offal, including sweetbreads, poultry liver and, to a certain extent, heart, tendon, tripe and brain. By comparison, this classic presentation of beef or calf liver is mild and easily digestible. It also fits in nicely with the ongoing retro trend. And with the nation continuing to produce so many excellent chefs, the modern liver and onions won’t resemble the dried shoe leather of yore. It’s true that many Americans wrinkle their noses at the thought of liver and onions, but they used to do the same thing to Brussels sprouts.

Correction: Jan. 15, 2015  An earlier version of this story misstated the headquarters and unit count of Salata. The chain is based in Houston and has 40 locations.