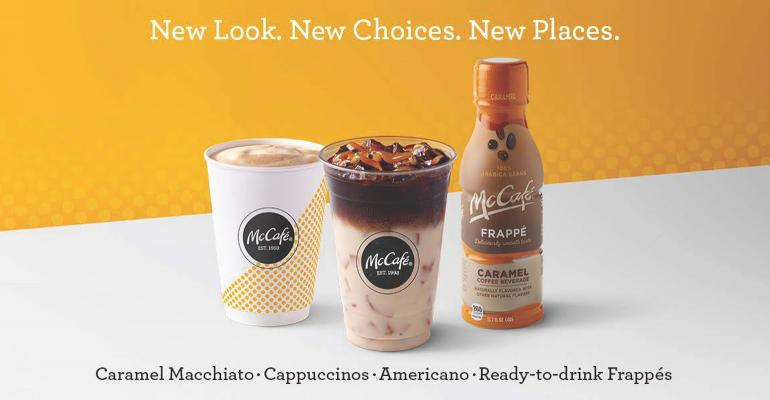 The Oak Brook, Ill.-based quick-service operator is also expanding its line inside grocery stores and other retailers, with a line of ready-to-drink McCafé Frappé beverages in three flavors: Caramel, Vanilla and Mocha.

The drinks come as a result of an expanded deal with the beverage maker Coca-Cola Company. The drinks will join the whole bean, ground and single-serve McDonald’s coffee available in retail stores nationwide.

The new retail beverages come as the company officially announced its planned expansion of its McCafé line of drinks on Wednesday, with Caramel Macchiato, Cappuccino and Americano. The drinks were available in McDonald’s locations last week. Executives promised more to come.

“This is just the start of our McCafé commitment,” Chris Kempczinski, McDonald’s USA president, said in a statement. “We understand how important the coffee culture is for consumers, and we are committed to meeting that demand at the taste, convenience and value only McDonald’s can offer. This is a central part of our growth strategy and we can’t wait to share what’s next.”

McDonald’s is making a big bet on beverages as it seeks a bigger share of the U.S. drink market. Discount drinks this year, including $1 coffee in the winter and $1 soft drinks in the summer, helped the chain’s same-store sales outperform many of its competitors.

Beverage-focused chains like Starbucks Corp. and Dunkin’ Donuts generated more than $30 billion in U.S. system sales in their latest fiscal years, according to NRN Top 200 data. But that doesn’t include convenience stores, which do a brisk business selling soft drinks and coffee, or chains like Sonic Corp. that sell a large number of drinks.

McDonald’s is giving its McCafé line a refreshed look, with a new logo and new packaging that will evolve with the seasons. The company also plans to transform its in-restaurant McCafé presence with a “sleek, modern look” next year as part of its Experience of the Future design — which features elements such as ordering kiosks.

The company introduced new coffee makers inside of nearly all of its U.S. restaurants, along with new training for employees. The coffee makers enable the new espresso-based drinks to be made with a more consistent taste. They cost about $12,000 per machine, and the company has helped franchisees pay for the equipment.

McCafé debuted in a location in Melbourne, Australia, in 1993. It was introduced as a national menu in the U.S. in 2009, and the company has expanded the menu to include frappes, smoothies, shakes, lattes, cappuccino and mochas.

Executives have been clear in recent months that they want the line to have a bigger, more defined presence inside its restaurants.

“Coffee traditions are part of our culture,” said Dan Coudreaut, vice president of culinary innovation for McDonald’s USA, in a statement.