This fried chicken-and-waffle-sandwich chain, based in Santa Ana, Calif., has franchised internationally, with units in South Korea, but not domestically until December.

Currently with seven units — six in California and one in Las Vegas — Bruxie has signed its first domestic franchise agreement to open two locations in the Denver International Airport, with further international deals signed for India and the Philippines. All four restaurants are projected to open sometime in the fourth quarter of 2019.

Bruxie CEO Anthony Smith — who replaced co-founder Dean Simon in 2017 — aims to further expand the brand with new franchise opportunities throughout the Southeast.

“Domestically, we are focusing on the South and Southeast, where there is a large presence of fried chicken and where we feel the uniqueness of our product will lend to the appeal of our brand,” a Bruxie representative said in an email interview.

Currently, the adult ice cream brand — with flavors like honey bourbon peach and hard apple pie — has two signed franchise agreements with a store opening in Wilmington, N.C. in April and one opening in Atlanta in mid-July. According to founder and CEO Colten Mounce, the company is also in the process of finalizing several more franchises across eight different states with outside investment assistance from a “local group to help develop the brand to its full potential,” although Mounce would not divulge any more details.

The average check at Buzzed Bull Creamery is just over $12 and their target unit size is 1,500-square feet.

“We believe we can break the mold in developing a franchise system from the ground up,” a spokesperson from Coolgreens said. “Most franchised systems are very rigid, and the franchisees are locked into strict brand standards in all areas of the business. At Coolgreens we want to partner with franchisees who are eager to lend their expertise and knowledge for the betterment of the brand as a whole.”

The average check at Coolgreens is $16 for suburban markets and $12 for college campus units, with an average unit size of 1,800-2,200-square feet.

Illegal Burger — a Denver-based artisan burger chain known for its espionage-themed burgers piled high with unique toppings — is in the middle of signing its first franchising agreement. The five-unit burger chain expects to begin selling franchises during the second quarter in 2019, with four more locations planned for the Denver area later in 2019 before the brand expands into other markets, including Nevada, New Mexico, Arizona and California.

The average check at Illegal Burger is $15 and their average indoor-outdoor unit size is 3,500 square-feet.

La Boulangerie de San Francisco — formerly known as La Boulange bakery when it was under Starbucks ownership from 2012 to 2015 — has been brought back to life by company founder and French baker Pascal Rigo.

In 2015, Starbucks closed the San Francisco-based French bakery, renowned for its 27-layer croissant, and sold 23 of the company’s units back to Rigo and partner/board member Nicolas Bernadi. Now the company is reinventing itself with a new name and franchising strategy, starting (nearly) from the beginning with nine San Francisco and Oakland-based units.

In February, La Boulangerie announced the first round of franchising backed by an undisclosed group of industry innovators. The brand is poised to spread throughout the West Coast and has already sold out the California territory, although no further details about unit openings were available.

La Boulangerie did not respond to requests for further details in time for publication.

This New York City-based fast-casual Southern barbeque chain announced franchising in late 2018. Currently with 13 units in New York, and New Jersey, along with three international locations, Mighty Quinn’s signed its first franchisee in February, partially thanks to a 2017 financing round with a small group of undisclosed investors.

Franchisee Jason Wotman has committed to opening three Mighty Quinn’s locations in Nassau County, Long Island, later in 2019. Another 10 to 12 corporate locations are planned in New York and New Jersey through 2020.

The average dinner check at Mighty Quinn’s is $25 with an average unit size that ranges from 900-square feet to 2,500-square feet.

This Dallas-based dog park/restaurant hybrid that allows dog owners to watch their canines while sipping a beer or grabbing food at a concession stand-style eatery signed its first multi-unit franchise agreement at the beginning of 2019.

Co-founders Kyle Noonan and Josh Sepkowitz have plans to increase their two-unit concept to five by the end of 2019, with more dog park restaurants planned for the Austin area.

Noonan and Sepkowitz also say they are poised to expand to 40 major markets across the United States. Beyond the first franchise agreement signed in Austin, the MUTTS team has not signed any further franchise agreements, but locations in Nevada and Arizona are next in the pipeline.

The average check at MUTTS Cantina (not including the cost of dog day passes or membership sales) is $14.35, including alcohol, with a unit size of 1,100-square feet on three-quarters of an acre of land for the attached dog park.

The Millennial-targeted pizza chain, acquired by HospitalityX in January 2018, has plans to expand its footprint to 100 locations by 2023. Though over the past year a number of units were closed, the new owners have developed a new prototype with updated technology. They are also exploring the possible use of CBD on the menu.

New Stoner’s Pizza locations were scheduled to open t his spring in Valdosta, Ga., and in South Carolina. The pizza chain has also secured a six-unit franchise agreement with DhaMir Group, a Texas company led by Hafeez Dhanani and Rezwan Mirza. The first DhaMir Group location will be opening inside a gas station in Nacogdoches, Texas, later in 2019.

The average check at Stoner’s Pizza Joint is $21 with an average unit size of 1,000-square feet. 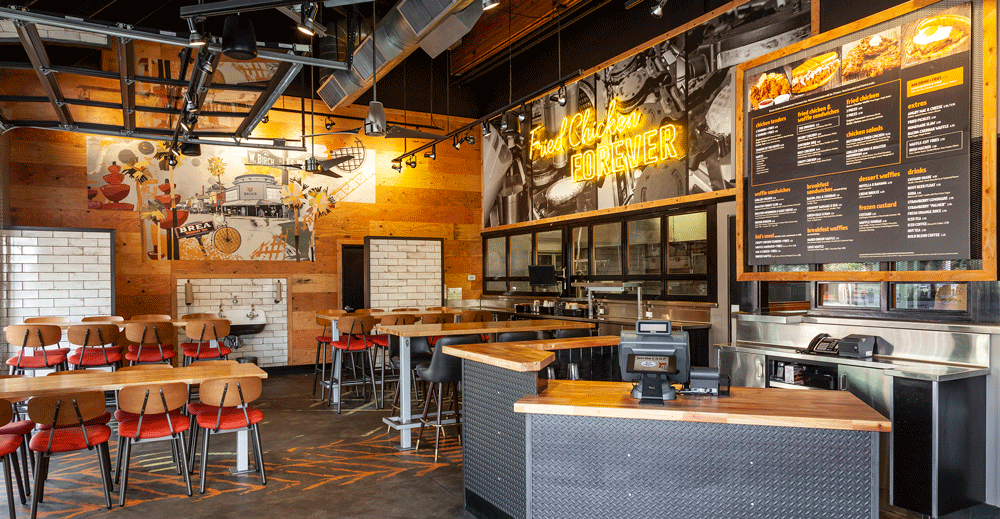