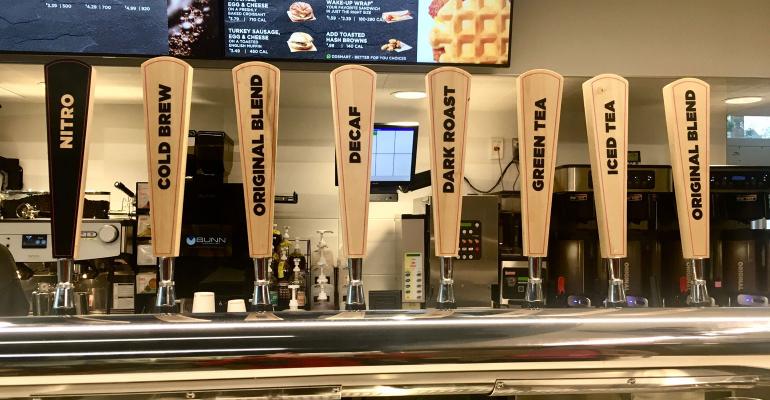 How Dunkin’ plans to beat coffee rivals on speed

Brand goes all-in on efficiency, espresso as it looks to steal share from Starbucks

As Dunkin’ continues its brand evolution, the coffee chain has also revitalized its beverage offerings with a line of bolder espresso drinks debuting Nov. 19.

Over the next several months, the coffee chain will introduce an affogato — espresso poured over sister brand Baskin-Robbins’ ice cream — as well as a white chocolate latte for the holidays. Dunkin’ is also testing out a flat white and have rolled out nitro and cold brew espresso beverages at their Next Generation stores. 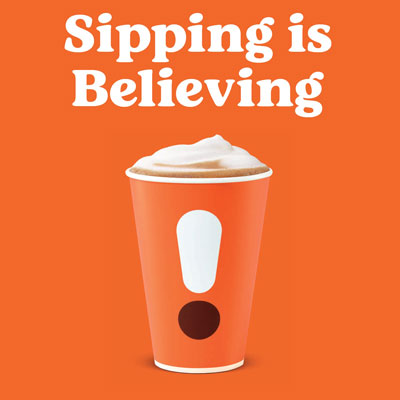 These new offerings may sound familiar, and Dunkin’ executives say they’re fully aware the brand is being compared to Starbucks. But, they say, Dunkin’ is not trying to be an imitator.

“There’s a lot of competitors in this space,” new CEO David Hoffmann said at a Dunkin’ Brands media event in Canton, Mass., on Tuesday. “We just want to be the best Dunkin’ we can be, and we think this is an area that we can play in.”

Hoffmann said traditional drip coffee “is aging,” and the brand has shifted its strategy to reach 20 and 30-somethings, who are more likely to offer a bolder, espresso-based beverage than a standard hot or iced coffee which Dunkin’ has historically been known for.

That said, Dunkin’ will soon be physically taking on Starbucks’ turf. Chief Marketing Officer Tony Weisman said that the brand has a major expansion in the works, with 1,000 new locations planned by 2020, many of which will open west of the Mississippi. He also hinted that Dunkin’ would finally come to Seattle, Starbucks’ home market. 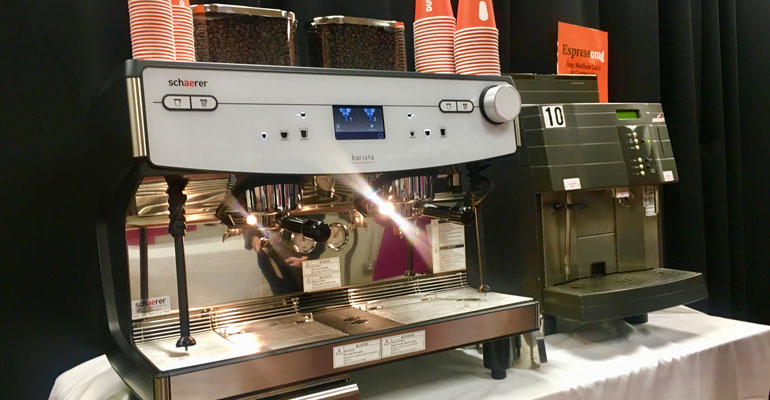 Dunkin's new espresso machine, left, and its old one, right

How will Dunkin’ stand out from the ubiquitous green apron? By focusing on speed and efficiency, executives say. The brand is introducing new mobile technology integration and modern store designs that make picking up coffee or breakfast coffee easier for on-the-go customers.

“We won’t out-comfy couch other brands,” Hoffmann said. “Our niche is the Dunkin’ way: Get in, get out and get on your way.”

Dunkin’ is introducing a newly redesigned app that’s “brighter and faster” for customers to use. It is also testing what it calls the “world’s first-ever” mobile drive-thru at its Next Generation concept store in Quincy, Mass.

The new drive-thru design features two lanes: The orange lane is for traditional drive-thru orders, while the pink lane is for mobile customers. The store will use geotracking technology to identify when a mobile order customer enters the parking lot. From there, the Dunkin’ crew can time order preparation so that the customer can seamlessly pick it up at the window. 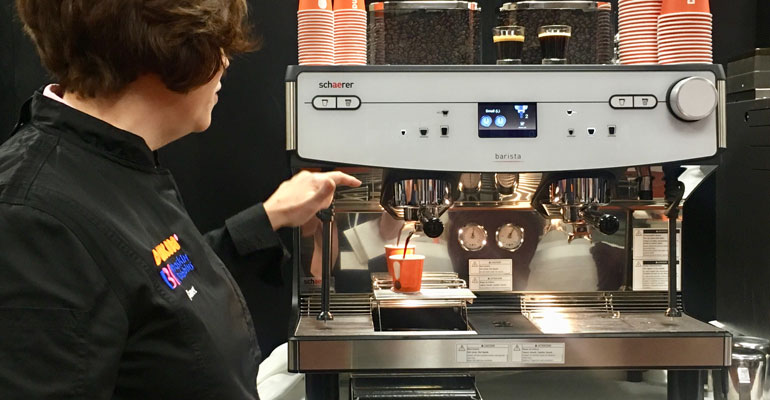 A demo of the new espresso machine

Customers picking up a mobile order in-store, they will find their names on a digital board at the front of the store that indicates the status of their order.

Dunkin’s improved efficiency also transfers over to the beverage-making process itself. Dunkin’ franchisee Parag Patel — a member of the Dunkin’ espresso relaunch team — said that his team worked with manufacturers of the brand’s Schaerer Barista machine to shave off “precious seconds” from the preparation of espresso beverages. On average, the custom machine can make an espresso drink in just a couple of minutes.

But efficiency and improved mobile technology won’t matter if the product is not up to par. Dunkin’s espresso team spent several years developing the new espresso recipe. They eventually settled on a recipe that’s slightly cooler, less watery, and with a caramel-colored crema on top. 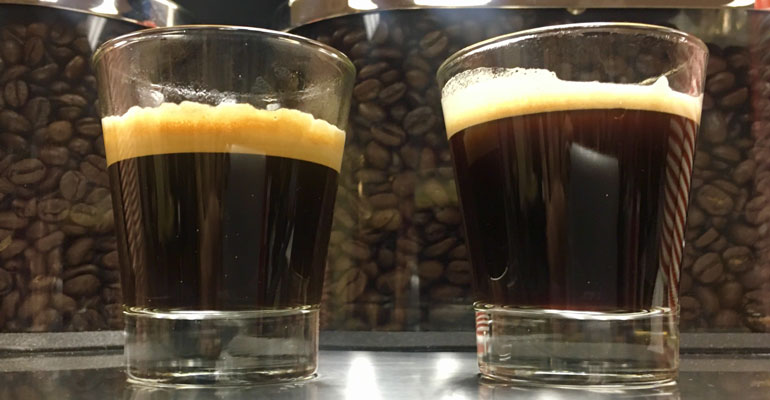 The new espresso, left, and the old espresso, right

“This was a cultural change for us,” Katy Latimer, vice president of culinary innovation at parent Dunkin’ Brands said. “We’ve been doing espresso for 15 years but it was always a small category for us.”

Latimer described the old espresso as “watery and bitter” while the new recipe is “heavier on the tongue with bittersweet chocolate notes.”

“I’ve said it before and I’ll say it again: There’s no need to go to Starbucks anymore” Weisman said.

Dunkin’ is offering free samples of its new caramel and white chocolate iced lattes on Nov. 16 and Nov. 17 from 10 a.m. to 2 p.m. During the week of November 19, customers will be able to try medium lattes or cappuccinos for $2 all day. The suggested retail price for a medium latte will normally be $3.39.

Correction: Nov. 14, 2018: This article has been updated to correct the spelling of Dunkin' franchisee Parag Patel's name.