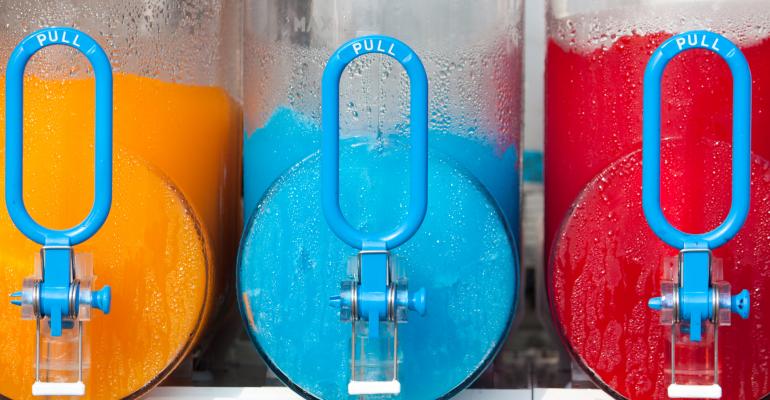 Whether they are made with coffee, fruit or even breakfast cereal, frozen slush drinks are gaining in popularity. Operators are finding that these beverages are easy to make, have low ingredient costs and are a welcome refreshment for consumers looking for a frozen blended drink.

From the brightly colored, sugary refreshments dispensed from whirring machines, to flavorful concoctions made from on-trend ingredients, frozen slush drinks are providing another reason to stop at a donut shop, coffee chain or a restaurant.

“A lot of afternoon snacks are specialty drinks, so snacks are a big driver of specialty drinks,” says Bonnie Riggs, the restaurant industry analyst for NPD Group. “They have a high appeal among women.” Also, the growth of iced coffee, including the popular cold brew, is contributing to the growth of these blended frozen beverages because many of the new items are coffee based.

One advantage for the operator is that the drinks contain a large amount of water, which is less costly than, for example, the ice cream needed for milk shakes or the yogurt in many smoothies. Riggs says that sales of shakes and smoothies have been flat, while there has been growth in sales of frozen slush drinks.

According to NPD Group, for the year ended March 2017, commercial restaurants served a total of 700 million servings of frozen slushy coffee drinks, with a compounded annual growth rate of 2 percent over the last four years. “It was stronger in 2015 and 2016,” Riggs says. “There were a lot of new products.”

Frozen slushie soft drinks, which are made with carbonated soft drinks, had 570 million servings, for a 7-percent growth rate. Those are popular with kids and teens and are served largely in convenience stores, Riggs says.

Operators say consumers are seeking frozen coffee and non-coffee based drinks. “We are seeing growth in both right now,” says Jenifer Hagness, senior director of marketing and product innovation for Minneapolis-based Caribou Coffee.

One popular drink is Blended Crafted Press, which features cold-filtered coffee, ice, sea salt, some cream and real sugar. “It’s for the enthusiasts who want their coffee to taste like coffee,” Hagness says. Another popular item is the Caramel High Rise Cooler, which is coffee blended with ice and caramel, topped with whipped cream and caramel sauce.

For people who want a frozen beverage that is not coffee based, Caribou Coffee offers Coffeeless Coolers. The newest one is Cereal Milk, which is fruity cereal blended with vanilla and raspberry syrups, half & half and Caribou Coffee’s signature shake mix, and topped with whipped cream and more cereal bits.

Another advantage for operators is that frozen slush drinks can be prepared in a blender. While other new, trendy drinks such as nitro coffee are gaining, some operators hesitate to add these to the menu because they would need new equipment --- a nitrogen tap.

While equipment is important, Hagness says the key is to use real ingredients. Caribou Coffee uses whipped cream made in-house and cold filtered coffee, which is prepared onsite.

Frozen coffee drinks are also a big hit at Honey Dew Donuts, based in Plainville, Massachusetts. “Frozen Mocha Madness is popular year-round,” says Kara Kavanaugh, the community manager. “The original is hot coffee with mocha; then we have an iced version, and now frozen,” she says. The frozen version contains coffee and chocolate mixes, whipped cream and chocolate drizzle.

“Indulgence is the trend in frozen beverages right now,” says Jill Thomas, vice president of global marketing for Atlanta-based Cinnabon. “The Cinnabon guests told us definitively that creamy and indulgent frozen beverages with premium ingredients was the trend we needed to capitalize on,” she says.

Cinnabon has reimagined its frozen signature beverages, Chillattas, making them creamier and more indulgent. The Cinnamon Roll Chillatta features a roll made with the chain’s proprietary Makara cinnamon, blended with creamy vanilla frappé and topped with a BonBite.

Cinnabon also has a “& Cream” platform. Strawberries & Cream Chillatta and Peaches & Cream Chillatta are made with all-natural fruit from Oregon and sweet cream. Thomas notes that the frozen frappé-style signature beverages provide Cinnabon with a variety of opportunities, without the complexity of ice cream’s equipment and operational implications.

Other quick-service chains are also offering frozen blended beverages as limited time offers. Auntie Anne’s offers Frozen Lemonade Mixers in Blue Raspberry, Cherry, Mango and Strawberry. Krispy Kreme offers Frozen Lemonades made with real lemons and cane sugar which are also available in strawberry or mango lemonade, both made with real fruit. Sonic Drive-In has frozen drinks such as Optimus Prime, which is cherry slush with an added layer of blue raspberry flavor on top; Bumblebee, orange slush with an added layer of grape flavor on top; and Megatron, clear slush with a layer of grape flavor on top.

Sometimes adults seek adult beverages. Brooklyn, New York-based Kelvin Slush Co. recently launched Frosé, an organic frozen cocktail mix. The mix does not have alcohol, but operators can mix it with, for example, water, rosé wine, and vodka in a slush machine to make a frozen rosé cocktail.

Zack Silverman, co-founder of the 6-year-old company, says the new flavor is popular. “We launched Frosé in May, and it's already our bestselling flavor,” he says.

Silverman says the trend at bars has been to pivot away from the traditional fruity drinks such as piña coladas, and moving more toward light, refreshing drinks. “Frosé is more interesting than a fruit drink,” he says. “Also there has been an increase in rosé wine sales in North America over the last few years. “

Frozen blended beverages are appealing to consumers of all ages, says Andrew Freeman, president of Andrew Freeman & Co. restaurant consultancy in San Francisco. “Who doesn’t love a slushy,” he says. “For adults, they are a great way to start the meal and an even better way to end it. I love a frozen drink like a Mudslide or a summer frozen coffee.”

While slushies have long been associated with convenience stores, Freeman points out that some adults feel nostalgic about slushies they once consumed at movie theaters. “Now slushies are becoming healthier and are being made with fruit juices, seasonal ingredients and unique flavors,” he says. “Slushies are here to stay, and I am excited to see where bartenders and drink developers can take them.”