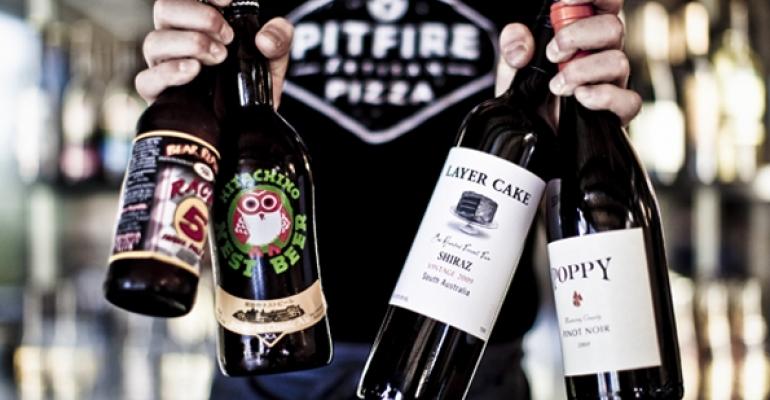 Beer and wine — or even wine-based margaritas — have long been a part of fast-casual chain restaurant menus, but a growing number of concepts are ramping up their alcohol offerings to stand out from the crowd.

Last year, Smashburger launched a new craft beer pairings program that matches local brews with burgers on its menu. The Denver-based chain plans to bring the program to six markets this year.

Chipotle Mexican Grill is also testing the offer of local craft beers in Chicago in partnership with the 5 Rabbit brewery.

The Dallas-based Snappy Salads chain is seeking approval to add beer and wine for the first time at a unit in Richardson, Texas. 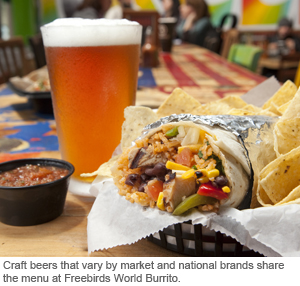 The 90-unit Freebirds World Burritos offers a selection of beers, including some on draft and craft brews like Shiner Bock, Saint Arnold and Shock Top alongside national Mexican and domestic brands like Corona, Dos Equis and Budweiser. Some franchised locations also serve tequila-based margaritas, which are unusual in the fast-casual Mexican realm.

Noodles & Co. has been testing an expanded beer and wine program that includes an upgrade to the experience, with new glassware and a focus on “wines from around the world and beers from down the street.”

And six-unit Los Angeles-based Pitfire Artisan Pizza chain recently opened a location with a full liquor license. Though the chain has long offered beer and wine, the Costa Mesa, Calif.-based restaurant will feature a speakeasy concept with a full bar, called Pie Society, in the back of the freestanding unit.

One reason fast-casual concepts may be focusing more on differentiated alcohol opportunities is the fact that some quick-service competitors are also experimenting with adult beverages. 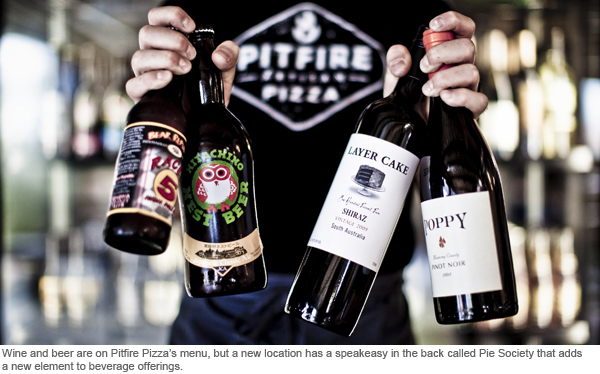 Sonic, Burger King, Johnny Rockets and Burgerville have been testing beer and wine additions, and Starbucks is increasingly adding alcohol to certain markets to build sales later in the day.

Introducing alcohol into the menu mix is not without challenges. There are training costs, varying state laws and permit processes.

However, for fast-casual concepts, offering more upgraded beverages helps boost dinner sales and enhances the overall guest experience. The addition of local craft beers that vary by restaurant also enhances the “anti-chain” vibe sought by a growing number of concepts. 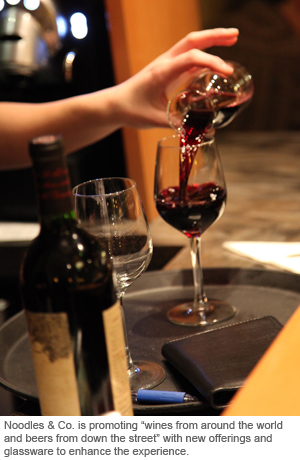 Tom Ryan, founder of the Denver-based Smashburger chain, said the trend follows the growing interest among consumers in craft beer, in particular. “We do it because the local craft beer trend is hugely popular,” explained Ryan. “For us, it’s taking America’s favorite adult beverage on a local basis and pairing it with America’s favorite food done in a modern way.”

The craft beer pairings program is available at Smashburgers in the Denver (New Belgium Brewing Co.), Brooklyn, N.Y. (Sixpoint Brewery), and Houston (Saint Arnold Brewing Co.) markets. This month, the chain plans to roll it out in Minneapolis, Phoenix and Miami. In February, markets in Ohio and Dallas will begin promoting local beers with specific burgers.

In each market, the chain works with the beer makers to develop the best beer-to-burger pairings. The matches are listed on menu boards and “tasting notes” are available at each table.

So far, Ryan said the 200-unit chain has seen traffic grow with both repeat and new business in the markets featuring the beer pairings. One Denver location has even tested a beer float with the chain’s Haagen-Dazs ice cream.

At Noodles & Co., local microbrews are part of the expanded beer and wine offerings that are part of an ongoing rebranding effort, which has also included the addition of appetizers and tests of new desserts, said Dan Fogarty, the chain’s vice president of marketing. 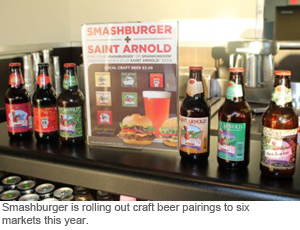 Wine offerings there include a selection from musician Dave Matthews, who makes a cabernet, as well as a Clos du Bois chardonnay, both offered from $5 per glass and $17 per bottle. A more value-positioned Black Box wine, what Fogarty described as an upscale wine in a box, is available for about $1 less.

Fogarty said alcohol has been a small part of the menu mix, but identified it as "a great opportunity."

For adults, being able to relax and have a glass of wine with their pasta while their kids are happy with their macaroni and cheese adds value to the experience and will help build dinner business, he said.

At Pitfire Pizza’s new Costa Mesa, Calif., location, the speakeasy in the back of the restaurant was an attempt to make good use of a larger space that already had a liquor license.

The bar will be able to service drink needs for a new “community kitchen” area, available for private parties or events, said Paul Hibler, the chain’s co-founder.

Though the bar is available in the facility, Hibler wants to keep the main dining room’s menu limited to beer and wine — and the possible addition of a rotating selection of pre-made cocktails made with seasonal ingredients. “But guests won’t be able to order a gin and tonic or something like that,” he said. “We’re not a bar. That’s in the back.”

Hibler said if the speakeasy is successful as an adjoining concept then he may add it to new units going forward where permits can be obtained, he said. But he doesn’t foresee getting too far into the bar business.

“I’ve seen too many companies dilute their brand by adding too many layers,” he said. “I want to make sure we stay focused on the baby, which is Pitfire.”