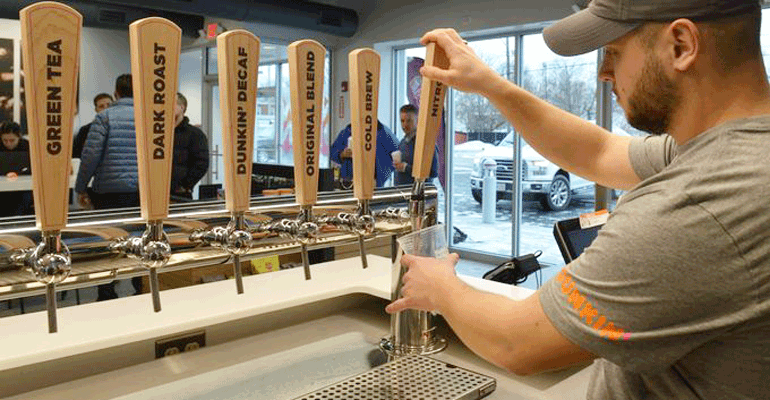 Both the drive-through and the digital kiosks enable Dunkin’ Donuts rewards customers to pick up their orders quicker than other customers.

“The launch of our next generation concept store marks one of the most important moments in Dunkin’ Donuts’ growth as an on-the-go, beverage-led brand,” said Dave Hoffmann, president of Dunkin’ Donuts U.S. and Canada.

“We have worked closely with our franchisee community to create a positive, energetic atmosphere for our guests that remains true to our heritage, while emphasizing and enhancing the unparalleled convenience, digital innovation and restaurant excellence that distinguishes Dunkin’.

This announcement comes after a year of changes for the brand. This month, parent company Dunkin’ Brands Group announced it had removed artificial colors from all of its doughnuts in the U.S. Last February the company tested out a streamlined menu, and in January of this year, they announced the limited menu would be rolled out to all locations.

The new concept store also represents the company’s push to rebrand itself simply as Dunkin’. In ads, the company has referred to itself as Dunkin' for years, and last year, a franchise in Pasadena, Calif., became the first to drop "Donuts" from its name. The new concept store is testing this new signage. It is the second store to trial this rebranding.

The 2,200-square foot concept store is one mile from the original Dunkin’ Donuts, which opened in 1950, the company said in the release. And both stores are owned and operated by brothers Victor and Octavio Carvalho.

Various aspects from the concept store will be included in 30 or more new and remodeled restaurants this year, according to the company.