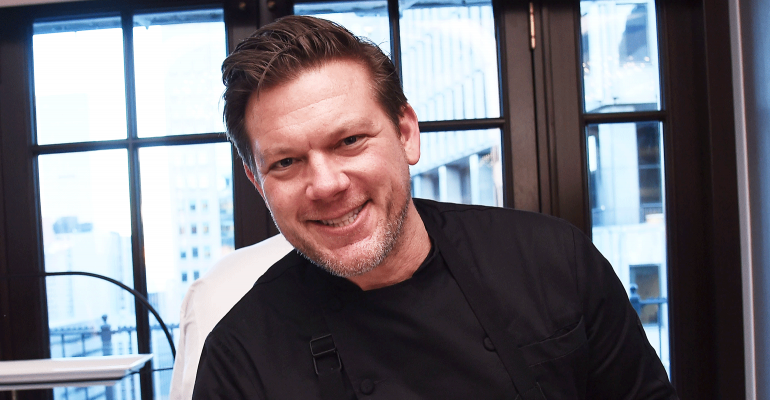 Cooper’s Hawk Winery & Restaurants has quietly become one of the fastest-growing restaurant chains in the country. The Chicago-based operator has added eight locations since the end of 2015, or 40-percent unit growth in less than 18 months.

But that might not be as impressive as its wine club, which now has 250,000 members who receive new wine releases every month, along with other benefits. Membership ranks have risen eightfold since 2011.

The wine club has deals with big-name winemakers, the latest of which is Tyler Florence, a celebrity chef who has spent the past decade winning medals for his wines.

Last year, Cooper’s Hawk partnered with Jean Charles Boisset, president of Buena Vista Winery. The chain has also worked with Fabio Viviani, Gail Simmons and others. Such deals bolster the wine club and beef up the chain’s bonafides with its wine-enthusiast core of customers.

The deal with Florence is an important endorsement of the wine club from a celebrity chef who has hosted several television programs over the years and has a major social media presence.

“We started Cooper’s Hawk with one restaurant and one winery,” McEnery said. “Eleven years later, I’m sitting next to Tyler and my team. It’s the coolest thing ever.”

For Florence, the Cooper’s Hawk deal offers an opportunity to display his winemaking skills in front of 250,000 sophisticated wine drinkers. A native of South Carolina’s Upstate region, Florence worked as a dishwasher at a high-end restaurant that his girlfriend’s parents owned during his teenage years.

“At that moment, I found my profession,” he said. “I knew I was committed to working in restaurants.”

He paid attention not only to the chefs, but to the sommelier.

“He always told the best stories,” Florence said. “I hardly left the state. But he would talk about wineries in France, Germany, Argentina, Spain and California. It sounded so amazing.”

Florence went to New York after finishing culinary school in the 1990s and worked for the lauded chef Charlie Palmer for a year and a half. He ultimately landed at the Food Network in 1996.

Florence started to get into winemaking a decade ago. He sold wine out of the trunk of his car, but ultimately landing 29 medals, numerous high ratings from critics and a deal with Target.

“When you open a bottle of wine, you’re testing a winemaker’s best intentions in a time capsule,” Florence said. “His experience is sealed off for you to enjoy. It’s always been a thing that I knew at some point I’d be making wine.”

McEnery and Florence met at the Aspen Food & Wine Classic more than a year ago and began discussing wine clubs. That ultimately led to talk of a partnership in which Florence would make a wine for the Cooper’s Hawk wine club.

Florence proposed a rosé, which he called an “everyday wine that fits a garden salad or barbecue chicken.” But he wanted the rosé to be made of a pinot noir, which hadn’t been done before.

“I love the idea of taking something typically revered, like a pinot noir, and do something fresh with it,” Florence said. “It’s really, really crisp. It pairs phenomenally well with grilled fish or spicy foods. I’ve made a lot of wine in my days. I think this is the best thing we’ve done.”

As part of the deal with Cooper’s Hawk, Florence appeared at an event in Chicago with 350 members of the wine club to debut the Pinot Noir rosé earlier this month.

It’s one of a number of events Cooper’s Hawk holds for its wine club members. They even include a travel program that lets members go to high-profile wine events with the company.

The club is only one element of the chain, which has become more of a lifestyle brand that is taking full advantage of the growing popularity of wine.

“What we’re trying to accomplish is to create something special and create special experiences for people who may never be able to go to Napa,” McEnery said. “In our tasting rooms and at our wine club events, we’re creating human connections where people can create lifelong friendships.”