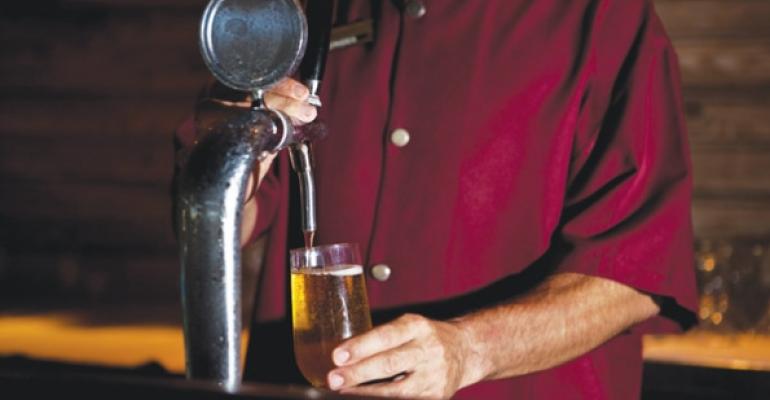 Last month I wrote about the rise of the nonalcoholic market, and, while it is clear that there has been a consumer shift away from alcohol, there is one small area of the drinks market that is doing better than most: craft beer.

Beer has always been a traditional part of British culture. From the largest city down to the very smallest village, everywhere has a “local” (pub). However, in recent times many of these establishments have been finding business conditions exceptionally tough, and many have been forced to close.

Craft brewing and microbreweries appear to be changing the fortunes of some of these establishments, though, capitalizing on the population’s taste for unusual and carefully made beverages, which is going from strong to stronger.

Data from research company CGA Strategy found that the total volume of beer sold in the U.K. fell 6.5 percent for the year ended in January. At the same time, craft beer has seen volumes soar by 62 percent. While craft beer still accounts for less than 2 percent of total beer volume sold in the U.K., the stark difference in fortunes nevertheless shows how successful this growing corner of the market is proving to be.

It is believed that there are approximately 32,000 brands of beer in the world, and this number is only continuing to grow. According to research company Mintel, sales of craft beer in the U.S. almost doubled between 2007 and 2012, climbing from $5.7 billion to $12 billion. Portland, Ore., recently became the first U.S. city where craft beer accounts for the majority of the market, according to research by Information Resources.

Around the globe, this small-scale model is exploding. Ireland saw 13 new microbreweries set up in the last year, and new operations continue to open in Western Cape, South Africa. About 150 microbreweries are now operating in Chile, and Mexico has seen an increase in U.S. exports of craft beer.

In the Far East, too, there has been a steady increase in the market. China now has the country’s first collaborative craft beer – born of a partnership between the country’s Great Leap Brewing and Boxing Cat Brewery – Yunnan Amber, which is infused with southwestern Yunnan province’s dianhong black tea. Singapore’s taste for craft beer has been growing since 1997, when its first microbrewery, Brewerkz, opened. Vietnam is the home of bia hoi, arguably the cheapest craft beer in the world. Japan, South Korea and the Philippines have also got a growing appetite for these beverages.

With so much international interest in the market, what does the future hold?

Are you seeing increased demand for craft beer from your customers? Join the conversation in the comments below.

One of the issues facing craft brewers is production volume. By its very nature, craft beer is experimental and small scale. If a brewer produces too much, the question becomes, “Is it still a craft beer?” However, by restricting volumes, profitably expanding and producing different beers without pricing yourself out of the market becomes difficult. As this market continues to mature, it will be interesting to see how this issue is overcome and if, in fact, some of the more successful microbreweries move away from their roots and go in for mass production.

The other major challenge for the smaller brewers is competition from the big breweries that are looking at ways to exploit the growing market and expand profit margins. Many are now setting up smaller subsidiaries that produce their own brand of “craft beer.” In Germany – arguably the home of beer – Bitburger set up Craftwerk, selling its IPA for up to four times as much as the mother company’s standard pilsner. In Australia, brewing giant SABMiller now has craft brand Fat Yak, and Copenhagen-based Carlsberg produces Jacobsen, its own super-premium craft beer.

There is no doubt that craft beer is enjoying a golden era and has captured the imagination and interest of people across the globe. Is it just a fad? Who knows – but, personally, I am loving the variety of flavors now available. And if the weather would ever get around to warming up, I am thoroughly looking forward to tasting some of these new gems on a long sunny afternoon.