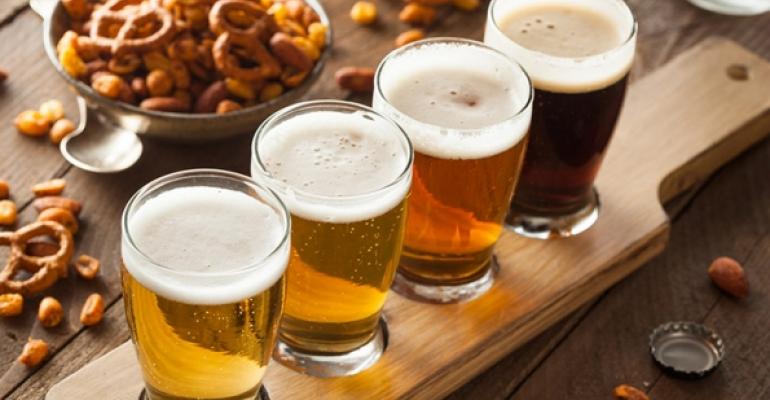 Consumers are sweet on sour beers

David Flaherty has more than 20 years experience in the hospitality industry. He is a certified cicerone and a former operations manager and beer and spirits director for Hearth restaurant and the&nbsp;Terroir&nbsp;wine bars in New York City. He is currently marketing director for the Washington State Wine Commission and writes about wine, beer and spirits in his blog,&nbsp;Grapes and Grains. &nbsp;

When that happens, things can get funky, so most brewers fight to make sure that it doesn’t. But a growing number of producers are harnessing the power of this microbiological dirty dancing and getting some fascinatingly complex results.

Welcome to the world of sour beer, a beverage trend that has started to take root and mature.

Once the bastion of only the heartiest beer geeks, sour beers have gone mainstream. Producers, importers, bar owners, restaurateurs and the media have all seen a trickle of interest turn to red-hot passion. And as the drinking public realizes there is nothing to fear from these mouth-puckering, palate-jolting delights, brewers of all sizes are rushing to get in the game.

The public is sweet on sours.

And as this movement has deepened, so too has the understanding that “sour” does not effectively describe them all. Most of these are classic beer styles that need years to age (and at great cost to brewers), but newer techniques have freed producers to quickly and consistently brew offerings to meet the demand.

Knowing the difference between styles will allow for smarter purchasing and help your customers find something new and exciting. Savvy operators are expanding their offerings, and ensuring their employees are trained not only to discuss the numerous flavor profiles with confidence, but also to employ them in creative food pairings.

While an incredibly broad category, sour beers are generally accepted to be those styles whose character comes from the introduction of wild yeasts such as Brettanomyces and/or lactic acid bacteria strains like Pediococcus and Lactobacillus. Adding these to the mix sets off a series of fermentations that take significant time to complete, but that create unique and often unpredictable flavors in the process — hence one of the reasons they’re so sought after.

Yogurt, which is created through a similar transformation, is formed when milk goes through a lactic acid fermentation, decreasing its pH and upping its tartness.

Sour beer flavor profiles can range from dry, spicy and effervescent, to malty, viscous and still.

When explaining the different styles to guests, Molly Brooks, a certified cicerone from San Diego, chooses to break them into two broad categories: Lactic sours and acetic sours.

“Lactic would be those whose primary sour flavor comes from lactic bacteria and includes lambics, gueuzes, witbiers, kettle-soured beers and some fruited beers. Some gueuzes can taste like champagne, some wild blondes like chardonnay, and some fruited lambics drink like strawberry soda or dry rosé wine.

“Conversely, acetic would be those whose primary sour flavor comes from acetobacter [vinegar], and include Flemish red/bruins. Flavors in this category tend toward chocolate, balsamic, caramel and toffee, but also vinous flavors like sour cherry, fig, prune and leather. Think red wine, root beer or vermouth.”

Jon Lundbom, division manager at B. United International, a beer importer, said sour beer is “a huge trend for our domestic craft breweries. Many of our younger brewers identify strongly with the ‘craft’ label, and find this category to be exciting, uncharted and often uncontrollable territory. They’ve seen tremendous success in the sour segment.”

Interest is also expanding to other segments of consumers, including wine drinkers, who may have been turned off by craft beer in the past.

“A lot of time and resources go into barrel-aged, mixed-fermentation ales,” said Jonathan Moxey, brewer at Perennial Artisan Ales in St. Louis. “We could brew and sell a pale ale in under a month, while a beer like our Foeder Saison or Funky Wit may take 14-plus months.” Additionally, it takes time and patience to educate people about these types of beers. “With any unfamiliar style, I think it's important to try to be humble and gracious when introducing them,” Moxey said. “I never want a customer to feel like they're asking a dumb question about new beers.”

Knowing how to present these beers to guests is key for Hayley Jensen, owner of Beer Barrio in Wilmington, N.C., who runs a draft-only program with 30 selections. She keeps a rotating roster of sour beers, and is surprised to see that they sell as well as other styles.

But education is still paramount.

“Make sure your menu describes the beers well, so that people know what to expect and why they’re so special,” she said. “And make sure your staff is educated — they should be serving these beers with the same attention to detail that one would a fine wine.”

The food pairing options are as vast as the sour beer category itself.

“I like pairing malty, acetic ales with hearty, roasted or stewed game like pork loin, duck, or even beef,” Brooks said. “I find lactic sours to be a perfect pairing with cheeses of all sorts — washed rind and funky, creamy or aged, blue, goat, cow and sheep. They’re also good with fish and seafood.”

While some of the oldest beer styles in the world fall into the sour category, modern brewers are carrying the torch forward, both by paying homage to their predecessors and also creating a whole new toolbox of experimental practices. And the public can’t get enough. Operators that dive in the water now will ride the crest of the wave that will carry them steadfastly into the future ... err, the past.