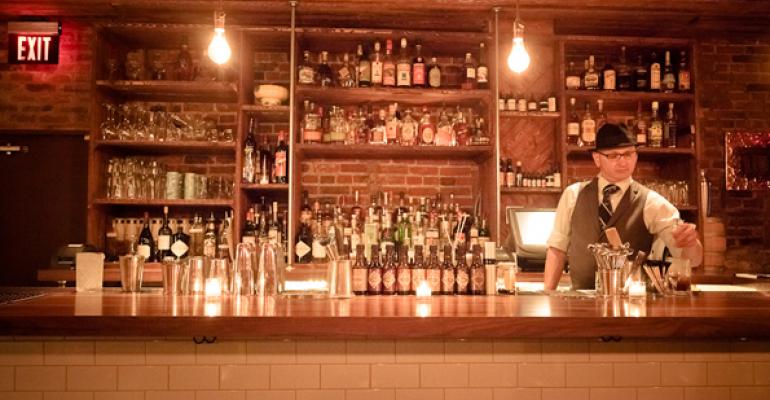 The mixologists of Taste can sling an esoteric concoction like the Second Star, a black-pepper-and-coriander-infused agave and gin cocktail, with the best of big-city barkeeps.

However, this St. Louis craft cocktail lounge also welcomes tipplers with more mainstream tastes with classic libations like the Old Fashioned, Whiskey Sour and Mint Julep plus Happy Hour discounts and a down-to-earth attitude. Making customers feel good about their drink choices — whether it’s an offbeat creation or an old standby — is paying off in a market where craft cocktails are catching on, yet many patrons remain conservative when it comes to their drink choices.

“We actually sell very little wine, beer and highballs, but when people order them, we don’t make a big deal about it,” said beverage director Ted Kilgore, who added that Taste sells 175 to 200 cocktails per day. “We don’t want to come across as pretentious, like so many cocktail places these days.”

Taste is owned by Gerard Craft, a four-time nominee for the James Beard Foundation Award for best chef in the Midwest who also has the local restaurants Niche, Brasserie and Pastaria. About 60 percent of sales are beverage — not to say that food is an afterthought. Snacks and small plates include “Pig Popcorn,” or spiced pork cracklings, priced at $5, and Manila clams with white wine and Thai chilies, priced at $9.

“We are a cocktail bar first and foremost, but with some of the best food you’ll find,” Kilgore said. 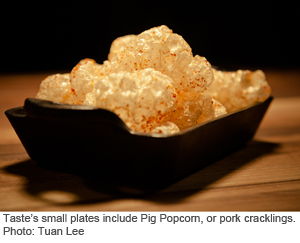 More familiar names are found among the 32 Classics drinks, each priced at $8 and annotated with an approximate date of origin. They range from the Mint Julep, circa 1790, to the Cosmopolitan, circa 1985.

Most patrons will find new flavors here as well, like the Sloe Gin Fizz, which dates to 1900. It is a mixture of sloe gin (actually not gin at all but a red liqueur derived from blackthorn berries, which are called sloe), lemon, egg white and club soda. Another cocktail of the past, the Jack Rose, from 1930, is a medley of apple brandy, lemon and grenadine.

Some might consider the Cosmopolitan, the hugely popular vodka, triple sec, cranberry and lime cocktail of the 1980s, simply passé rather than classic. However, Taste’s version, sporting Polish vodka, Cointreau and fresh lime, is up to craft cocktail standards.

“It’s the last true classic of our time,” said Kilgore. “We don’t sell many. But if people see a Cosmopolitan on the menu and feel comfortable ordering it, maybe they’ll look around for something different next time. It’s really a way to put people at ease”

To boost business and encourage drink trial, Taste offers Social Hour all day Sunday and Monday, and from 5 p.m. to 7 p.m. Tuesday though Friday, featuring $6 Classic cocktails and $1-off snacks.

“Someone may have always wanted to try a Mint Julep,” said Kilgore. “When it’s only $6, here’s their chance.”